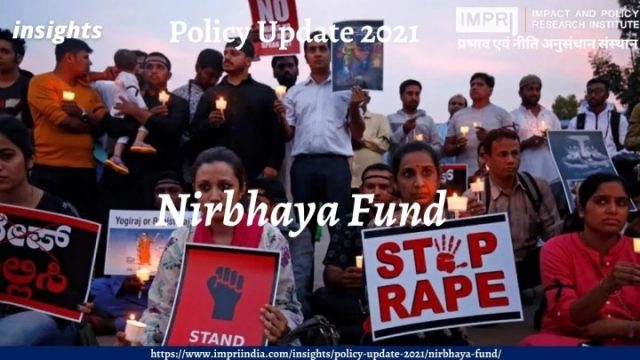 The incident on December 12 jolted the Government of India into action when it came to recognizing the immobility experienced by women in public spaces due to absence of spatial security. Recognizing that pubic access is difficult for women both for security and safety, the Nirbhaya Fund was set up. This dedicated fund issued by the Ministry of Finance dated 25 March 2015 with the nodal Ministry, Ministry of Women and Child Development (MWCD) for projects designed specifically to improve the safety and security of women. The MWCD is to appraise, recommend proposals and schemes to be funded under the Nirbhaya Fund.

The Nirbhaya Fund is a non-lapsable corpus fund. The empowerment committee has enumerated that the proposed projects under Nirbhaya Fund should have the following features:

The proposals can have budgetary allocation from anywhere between Rs. 100 crore to Rs. 1000 crore. Funding pattern for all projects is a 60:40 share for all States, 90:10 for States with difficult terrains and 100% for UTs. There is provision for a few initiatives to be 100% funded by the centre. The nodal monitoring agency of the project would be MWCD.

The Nirbhaya Dashboard is a digital platform for all concerned Ministries/ Departments, States/UTs/Districts to update the Status of expenditure and details of women availing the Schemes/Projects funded under Nirbhaya Fund. The URL is: www. nirbhayadashboard.nic.in.

Out of an allocation Rs.6212.85 crore (including Rs. 500 crore allocated to Ministry of Women and Child Development in the year Financial Year 2021-22) till date, under Nirbhaya Fund, a sum of Rs. 4087.37 crore has been disbursed/ released by the concerned Ministries/ Departments and a sum of Rs. 2871.42 crore has been reported to be utilized, roughly estimated to be 50 percent of the fund. Since its inception of Nirbhaya Fund, schemes/ projects worth Rs. 9764.30 Cr. have been appraised by the Empowered Committee (EC). To view the state wise allocation and projects funded under the fund so far please review: https://pib.gov.in/PressReleasePage.aspx?PRID=1737773

Major Projects Launched under the Fund:

For women, One Stop Centres (OSCs) have been set up across the country. Popularly known as Sakhi Centres. The Scheme is implemented across the country since 1st April, 2015 for facilitating access to an integrated range of services including police, medical, legal, psychological support and temporary shelter to women affected by violence.

The Scheme of Universalisation of Women Help Line is also being implemented since 1stApril, 2015 and is intended to provide 24 hours emergency and non-emergency response to women affected by violence through referral services (linking with appropriate authority such as police, One Stop Centre, hospital) and by providing information about women welfare schemes/ programmes across the country through a single uniform number (181). So far, women helplines have become operational in 33 States/UTs. They have managed more than 54.25 lakh calls.

The Mahila Police Volunteer (MPV) Scheme is being implemented by the Ministry in collaboration with Ministry of Home Affairs. This scheme is funded by Nirbhaya Fund as a centrally sponsored scheme with the aim to create and empower MPVs. They are to act as a link between police and the community and facilitate women in distress. MPVs serve as a public police interface in order to fight crime against women and report incidents of violence against women such as domestic violence, child marriage, dowry harassment and violence faced by women in public spaces.

2. In Collaboration with Other Ministries:

Along with the Ministry of Home Affairs plan to launch the Cyber Crime Portal www. cybercrime.gov.in with the help of Nirbhaya Fund. The portal receives complaints from citizens on objectionable online content related to child pornography, child sexual abuse material, sexually explicit material such as rape and gang rape. It enables complainants to report cases without disclosing their identity. The complaints registered through this portal will be handled by police authorities of respective State/UTs. The complainant can also track the report on the portal. Hyperlink of this portal has been made on the Ministry’s website.

As part pf MHA’s Safe City Projects, to plug in the gaps between police and women citizens Rs.  2,919.55 Crore have been approved to be spent on building existing police infrastructure. The proposals, inter-alia involves crime mapping for identifying crime hotspots and filling in gaps in the eco-system for ensuring safety of women in public places.

Hiring of Professional Counsellors/ Social workers at the District, Sub-Division and Police Station level in Delhi Police at a cost of Rs.5.07 Crore. It also seeks to establish an effective multi-agency co-ordinated response by the State to all forms of violence against women and children including sexual assault through trained social workers providing quality psycho socio-legal services for violated women and children.

An amount of Rs. 10.20 Crore has been appraised to Delhi Police for undertaking various activities which inter-alia include holding Camps for Self Defence Training in School/ Colleges, Publicity in mass media, procurement of essential items/equipment to enhance the capability of women police force for imparting training, procurement of cyber equipment and making short films/pamphlets on women safety for distribution.

MHA has approved setting-up of a state-of-the-art DNA Analysis facility at Central Forensic Science Laboratory (CFSL), Chandigarh at cost of Rs.99.76 crore under Nirbhaya Fund. This Laboratory has a capacity and capability for examining 2000 DNA crime cases per annum for speedy disposal of cases relating to sexual assault and POCSO Act related cases. The Laboratory has been operationalised on December 23, 2019. An amount of Rs. 189.45 Crore was approved under Nirbhaya Fund for strengthening DNA analysis cyber forensics and related facilities in 20 States

For training and skill building programs for Investigation Officers, Prosecution Officers and Medical Officers and procurement of Forensic kits for sexual assault cases. Additionally, approval has been given for procurement of nearly 14000 Sexual Assault Evidence Collection (SAEC) Kits for distribution to States/UTs in FY 2019-20. The Kits will facilitate expeditious and efficient collection of DNA samples in the crimes of sexual nature, identification of dead bodies etc. The project cost of Rs. 7.09 Cr. has been appraised under Nirbhaya Fund.

The Empowered Committee for Nirbhaya Fund in Ministry of Women and Child Development has approved a project by MHA for setting-up/strengthening Anti Human Trafficking Units (AHTU) in all districts of the country at cost of Rs.100 crore under Nirbhaya Fund. The AHTUs will provide counselling and support to the victims of trafficking. A total of Rs.94.36 crore has been released.

With the Ministry of Railways 2.78 Integrated Emergency Response Management System (IERMS): are being set up under Nirbhaya Fund and will be run by the Ministry of Railways. CCTVs and Monitoring rooms are being installed at 983 major Railway Stations to provide 24×7 securities to women passengers at stations. The total cost of the project appraised by the Empowered Committee is Rs. 500.00 Cr. An amount of Rs. 336.58 Cr. has been allocated/ released by M/o Railways. Further, an amount of Rs. 17.64 Crore has been appraised under Nirbhaya Fund for installation of CCTV cameras at Konkan Railway Stations.

With the Ministry of Road Transport and Highways pilot project Abhaya has been approved. The proposal is for installation of ‘IoT’ (Internet of Things) device and related software in public transport vehicles in Vishakhapatnam and Krishna District of Andhra Pradesh on pilot basis. Proposal was approved with total estimated cost of Rs. 138.49 Crore and Central Share of Rs. 58.64 Crore was released.

With the MoRTH and Government of Uttar Pradesh a safety project has been launched. The proposal includes 50 ladies pink Buses, CCTV, Panic buttons and controllers on 12500 buses, 24 interceptors, Advocacy/ Advertisements/ Awareness Campaign’. Proposal of UPSRTC has been sanctioned with total estimated cost of Rs 83.40 Cr. An amount of Rs. 80.92 Crores has been released to UPSRTC.

Functioning of the Nirbhaya Fund:

It cannot be denied that the Government of India has been jolted into action where Nirbhaya Fund becomes the locus of launching projects nationally to increase mobility and public access for women in the country. Though the project is still functioning at mitigation and protection. The fund has not appraised or approved any proposals which solve the problems at their root cause. The failure of Fast Track Courts is not new, the working condition and centralised protection through surveillance systems has not yielded the desired results due to either surveillance gaps or inactive systems.

Gender Sensitization is still amiss building infrastructure and one of training programs are not the solution to systemic concerns. Women issues are not close to being solved in India the NCRB data clearly shows that crimes against women is on the rise. We are still hesitant in recognising marital rape as a threat to women. The spatial accessibility for women is lowest, workforce share is dismal and lowest in the previous decade due to COVID- 19. Nirbhaya Fund has still only bee utilised for 50 percent of its capacity.

An Oxfam Report Towards Violence Free Lives for Women found that, Women-specific budgets under the budget have increased 3.5 times in the years from 2018-19 to 2020-21 after a very poor allocation and uptake in the previous years. Since 2018-19, the number of proposals for the Nirbhaya Fund as well as the allocations and approvals have increased. However, the expenditures under the fund for specific projects and schemes have been quite low.

Looking at the Flagship project of One Stop Centre only two states Uttarakhand and Chhattisgarh have utilised more than 40 percent of the funds.

At the same time, Karnataka, M.P, Maharashtra & West Bengal have not utilized any of the funds released towards Women Helpline Scheme.

Recent Data also shows that funds allocation under Nirbhaya Fund with Department of Justice and Ministry of Road Transport and Highways also has not been consistent across states.

Oxfam India Reported that Nirbhaya Fund’s underuse could be attributed to the larger lack of political will to act for gender safety in India. The report also speaks to budgetary concerns, “One of the biggest problems with all women-specific schemes is that budgets are substantially underutilised. This leads to a circular logic of reducing the Revised Estimates (RE) for the current year and Budget Estimates (BE) for the subsequent year, as lesser the utilisation, lower the allocation.”

Transparency of funds allocated and the expenditure under various projects is a key concern specially because 73 percent of the allocated funds go to the Ministry of Home Affairs (Oxfam Report). The budgets under ‘Mission for Protection and Empowerment of Women’, have been transferred to SAMBAL. This included the following schemes: OSCs, Mahila Police Volunteers, Women’s Helpline, Swadhar Greh, Ujjawala, Working Women Hostel, and Home for Widows. One of the consequences of such clubbing or transferring of schemes is that deciphering individual allocations to various schemes under this broad umbrella becomes difficult, resulting in a lack of transparency.

Most schemes under the Ministry of WCD are 60 percent funded by the Centre, the remaining 40 percent being the responsibility of the states. In many cases, states are often not in a position to bear this 40 percent cost of services. This can become a bottleneck for expenditure, as well as cause delays in releasing funds by the central government. The Oxfam Report recommends that the central government must provide at least 90 percent, if not 100 percent of the women-specific budgets required to institutionalise services addressing violence against women.