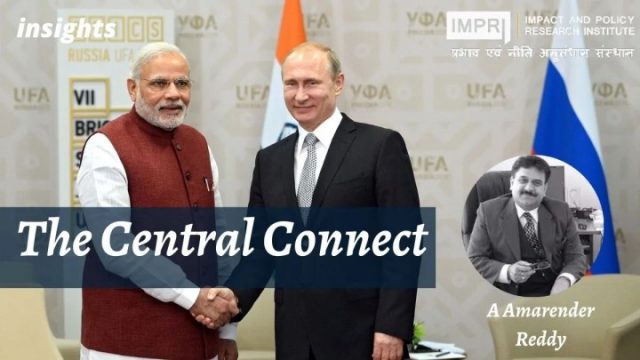 After President Putin’s short, symbolic yet substantive visit for the 21st Annual Summit with Indian Prime Minister Narendra Modi , New Delhi installed the first S-400 battery of the Russian Triumf air defence system in Punjab to keep and eye and take care of threats from western and northern fronts .Others are in the pipeline as talks of upgraded S-500 are said to be a logical next step.

India , pursuing her national security interests, went ahead with the procurement ,despite CAATSAisation threats from the US – it’s another global comprehensive strategic partner . China was not happy either  with the Russians for going ahead and providing at least a partial defensive  equalizer to New Delhi  in their  competitive and conflictual game.

India must have weighed in the likely repercussions and cost benefit analysis while exercising her strategic autonomy for which it has been known at least since independence . Many especially big powers hate her guts. It is crucial that New Delhi exercises her choices more robustly and independently as it celebrates her 75 years of Independence. Bottom line is that those who produce weapons need or create the conditions for their eventual use either as conduit for deterrence or eventual use.

Hence , those significant markets like India have a choice to leverage it also to their advantage which they must as trade is a two way street. India is trying to do that through her self-reliance or ‘Atma Nirbhar ‘ programme in defence and other sectors where Make in India, Make for India and the world become the underlying dictum for suppliers.

Of course , simple foolhardiness has its costs but well calculated decisions have their eventual benefits while one is able to test the credibility and reliability of its strategic partners . Security has many dimensions where strategic engagement and outreach is absolutely an imperative. Good partners help in achieving that .

Afghanistan and the onset of not so friendly  Taliban has been a set back for India’s bilateral and regional connectivity dimensions for which it has been working diligently and consistently . But pro Pak factions and Chinese primacy are challenges for New Delhi in the changing equations in an unstable Afghanistan . Taliban per se would like to see India continue to  play a constructive and nation building  role which  it has been doing for two decades,  despite pressure from Rawalpindi and the hesitations of security scenario and terrorism concerns of India. It was evident with Islamabad disallowing transit for  India’s 50000 tonnes of wheat assistance for the suffering Afghans until the Taliban expressed their displeasure directly.

Since connectivity with Central Asia for its larger outreach  remains a priority for India beginning with Connect Central Asia Policy of 2012 ,New Delhi has developed an all encompassing collaborative matrix from security to trade to energy to AI and digital as well as HEALTH connectivity with its extended neighbourhood as PM Modi terms it. Renewed focus on International North South Transport Corridor (INSTC) with the inclusion of Chabahar strategic Iranian Port are a step in the right direction for a broader Eurasian outreach.

After the NSA level dialogue with CIS ,Russia and Iran over Afghanistan ,the recently held 3rd India -Central Asia dialogue in New Delhi among the Foreign Ministers and invitation to five Central Asian Heads of State on the Republic Day 2022 is a unique honour conferred on real strategic partners and friends . The Summit meeting may be held then . Contact, Commerce ,counter terrorism and connectivity are binding requirements between India and Central Asia for security and stability of the region. But for Pakistani intransigence and zero sum game with India, peace and prosperity for Central and South Asian people could have been easier.

President Putin ,meanwhile, had another Telecon with PM Modi after his virtual Summit with President Xi Jinping of China .There are efforts to upgrade the Primakov conceived RIC framework to the Summit level even though New Delhi is still coping with the Chinese assertions and advancements on the borders and trust deficit is difficult to bridge .Moscow obviously finds it not cool from its own geo political perspective where Sino-US rivalry combined with Sino-Indian conflict could lead to further Quadisation of Indo-US strategic bonhomie .

How the dice will be cast eventually is any one’s guess but all options are on the table. Least confrontational the most beneficial as common sense dictates.

Meanwhile as Omicron creates the mischief let me wish you a  Merry Christmas and a much better and happier and healthier 2022.

The article The Central Connect first appeared in The India Observer