Home Articles Exodus of migrant workers from Delhi: Where are the data to help...
Facebook
Twitter
WhatsApp
Linkedin
Email
Print 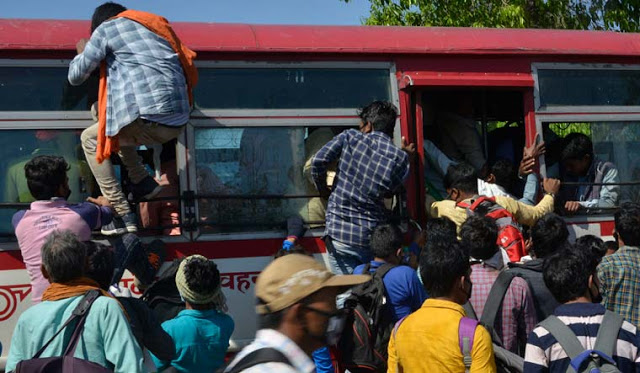 Large scale exodus of migrant labourers from Delhi following the announcement of the nationwide lockdown due to the COVID-19 pandemic crisis stirred up the nation’s conscience. Haunting scenes of people defying the law enforcing agencies’ instructions to keep safe distances from each other and not crowding at bus and railway stations and attempting to walk hundreds of kilometers in the absence of any transport were due to administrative inadequacies.
A complete lockdown is an untested exercise anywhere in the world, but what cannot be denied is the total absence of factoring the migrant population in the decision-making.

Documents on Indian domestic migrants have highlighted how most of the migrants, especially those coming for employment, do not carry government provided welfare entitlements to their place of migration. This adds to the woes in reverse migration, especially when there are uncertainties over their lives and livelihood.
Migration has many dimensions and migrants come with many intentions from many places. Individually they are visible everywhere in the city but collectively they are rarely accounted for in the city’s demography. Failure to quantify the city population characteristics is a failure of the statistical apparatus.

As per the 2011 Census, the National Capital Region (NCT) of Delhi had a population of 13.9 million. Of this nearly 51% were migrants from within India. Close to a million (14% of the population) was people who migrated for employment. In this situation, it is obvious to understand the widespread unease among them when their livelihoods stand threatened by a long economic lockdown.

In any city, migrants with a longer duration of stay are expected to be more established in terms of housing and other entitlements. In Delhi one in five migrants has had stayed for less than five years. Assuming that migration trends remained the same if not increased, it was to be expected that at least 2 lakh persons will be left to fend for themselves without any economic support or an address where any social security assistance can be delivered (Census Table D-3: Migrants by place of last residence, duration of residence and reason for migration – 2011).
Another point to note from the 2011 Census is that the migrants in Delhi are not evenly distributed within the city. The New Delhi and Central districts together account for only about 3% of the migrants. Majority of them are scattered in the periphery of the city (click here for table).

Another fact that comes to the fore during the recent spectacle of reverse migration was the direction of their movement, namely, these were mainly towards the eastern states of India. Over half of the Delhi migrants are from UP and Bihar, which accounts for about 65% of the migrants who came for work to Delhi.

“It is time for a comprehensive plan to address the data lags, which will help to factor in the city’s population in times of calamities”

Other states having significant migrant population were: Haryana, Rajasthan and Uttarakhand. These five states accounted for 75% of the migrants in Delhi in 2011. If we see the migrants who came for work then these states account for 81% of them (click here for table).
Around 40,000 relief camps and shelters have been set up (as on April 12, 2020) all over country in which over 14 lakh stranded migrant workers and other needy people are provided relief. Out of this, more than 80% of relief camps have been set up by states, while the rest are by NGOs. Also, over 26,000 food camps have been set up in which more than 1 crore people are being provided food. Over 16.5 lakh workers are being provided food and relief by their employers and industries.

The hotspot of these relief shelters and camps are in the cities of Kerala, Maharashtra, Tamil Nadu, Delhi, etc. Southern states are handling the situation relatively well as compared with capital Delhi. In Delhi, as of 15 April 2020, more than 6 lakh people were provided food from over 1800 camps, operating from shelters (223 shelter homes having capacity of over 18,000 and live occupancy of mere 7,000).

Sufficient data is not available on the living arrangements of the migrants, their economic or occupational engagements, especially at city levels. The Census does provide the aggregated numbers with limited qualitative dimensions. We do not have any inter-censal surveys to project the census migration data before the next census.
While the Census is held decennially, the National Sample Survey Organization (NSSO) used to fill the gap with surveys on employment and migration every five years. These have been dispensed with. The last NSSO survey on internal migration and outmigration was held in 2007-08 (64th Round). It is time for a comprehensive plan to address the data lags, which will help to factor in the city’s population in times of calamities — whether natural or something like the COVID-19 type pandemic health crisis.
Disclaimer : Originally published in Counterview on April 13, 2020

Requirements for A New Telecom Law – IMPRI Impact and Policy...