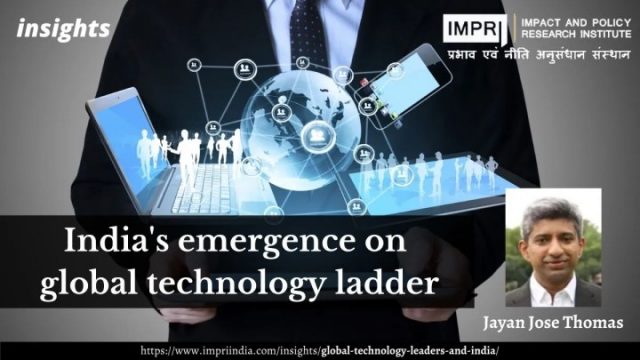 Every time a technology giant chooses an India-born techie as its leader, there is a justifiable swelling of pride in the country, but also some disappointment. Despite having so many celebrated technologists around the world, why is India still not a major player in technology? India has the potential to occupy the upper echelons of the global technology ladder if only it identifies its shortcomings and acts upon them urgently.

India has the potential to occupy the upper echelons of the global technology ladder if only it identifies its shortcomings and acts upon them urgently.

The popular narrative is that India’s failures are linked to its inability to make use of the market-driven growth opportunities. The country’s earlier commitment to planning and the public sector continues to damage its chances, so the argument goes, even after the 1991 economic reforms. And so, the talented left the country in droves for the U.S. Indeed, as of 2019, there were 2.7 million Indian immigrants in the U.S. They are among the most educated and professionally accomplished communities in that country.

No doubt, the U.S. is a country of fabled opportunities. However, what is less known is than an invisible hand of the government has been there to prop up each of the so-called triumphs of enterprise and the free market. Research by Mariana Mazzucato shows that the state has been crucial to the introduction of the new generation of technologies, including the computers, the Internet, and the nanotech industry.

Public sector funding developed the algorithm that eventually led to Google’s success and helped discover the molecular antibodies that provided the foundation for biotechnology. In these successful episodes, the governmental agencies were proactive in identifying and supporting the more uncertain phases of the research, which a risk-averse private sector would not have entered into.

The role of the government has been even more prominent in shaping the economic growth of China, which is racing with the U.S. for supremacy in technology. A little over a decade earlier, China was known for its low-wage manufacturing. Even while being hailed as the ‘factory of the world’, China had been stuck at the low value-adding segments of the global production networks, earning only a fraction of the price of the goods it manufactured. However, as part of a 2011 government plan, it has made successful forays into ‘new strategic industries’ such as alternative fuel cars and renewable energy.

China’s achievements came not because it turned ‘capitalist’, but instead by combining the strengths of the public sector, markets and globalization. China’s state-owned enterprises (SOEs) were seen as inefficient and bureaucratic. However, rather than privatizing them or letting them weaken with neglect, the Chinese state restructured the SOEs. On the one hand, the state retreated from light manufacturing and export-oriented sectors, leaving the field open for the private sector. On the other, SOEs strengthened their presence in strategically important sectors such as petrochemicals and telecommunication as well as in technologically dynamic industries such as electronics and machinery.

When India inaugurated planning and industrialisation in the early 1950s, it was possibly the most ambitious of such initiatives in the developing world. Public sector funding of the latest technologies of the time including space and atomic research and the establishment of institutions such as the Indian Institutes of Technology (IITs) were among the hallmarks of that effort. Many of these institutions have over the years attained world-class standards. The growth of information technology and pharmaceutical industries has been the fastest in Bengaluru and Hyderabad. However, the roadblocks to progress have been many, including India’s poor achievements in school education.

In 1991, when India embraced markets and globalization, it should have redoubled efforts to strengthen its technological capabilities. Instead, the spending on research and development as a proportion of GDP declined in India from 0.85% in 1990-91 to 0.65% in 2018. In contrast, this proportion increased over the years in China and South Korea to reach 2.1% and 4.5%, respectively, by 2018.

Despite the setbacks, India still possesses favorable supply and demand factors that can propel it into the frontlines of technology. The number of persons enrolled for tertiary education in India (35.2 million in 2019) is way ahead of the corresponding numbers in all other countries except China. Further, graduates from STEM (Science, Technology, Engineering and Mathematics) programmes as a proportion of all graduates was 32.2% for India in 2019, one of the highest among all countries (UNESCO data).

Without doubt, India needs to sharply increase its public spending to improve the quality of and access to higher education. An overwhelming proportion of tertiary students in India are enrolled in private institutions: it was 60% for those enrolled for a bachelor’s degree in 2017, while the average for G20 countries was 33%, according to OECD.

The number of persons enrolled for tertiary education in India (35.2 million in 2019) is way ahead of the corresponding numbers in all other countries except China.

India — which will soon have twice the number of Internet users as in the U.S. — is a large market for all kinds of new technologies. While this presents a huge opportunity, the domestic industry has not yet managed to derive the benefits. For instance, the country is operating far below its potential in electronic manufacturing. Electronic goods and components are the second largest item, after oil, in India’s import bill. Also, the country’s imports are almost five times its exports in this industry (based on 2020-21 data).

High-value electronic components needed in the manufacture of, say, mobile phones are technology- and design-intensive. Big multinational companies control these technologies and corner the bulk of the revenues. China has used its large market size as a bargaining chip in negotiations with the foreign firms: stay in our markets only if you localize production and share technologies with the local firms. Meanwhile, there have been aggressive efforts to enhance China’s own technological strengths through its research institutions and SOEs.

The ‘Make in India’ initiative will have to go beyond increasing the ‘ease of business’ for private industry. Indian industry needs to deepen and broaden its technological capabilities. This will happen only if universities and public institutions in the country are strengthened and emboldened to enter areas of technology development for which the private sector may have neither the resources nor the patience.

Indian industry needs to deepen and broaden its technological capabilities.

Over the last three decades, PSUs in India have been judged mainly on the short-term fiscal benefits they bring. Instead, they should be valued for their potential long-term contributions to economic growth, the technologies they can create, and the strategic and knowledge assets they can build. A strengthened public sector will create more opportunities for private businesses and widen the entrepreneurial base.

Small and medium entrepreneurs will flourish when there are mechanisms for the diffusion of publicly created technologies, along with greater availability of bank credit and other forms of assistance. The next big story about Indian prowess does not have to be from the U.S., but could come from thousands of such entrepreneurs in far-flung corners of the country.

First published in The Hindu, Can India become a technology leader?

Read another piece by the author on Unemployment, Imperative to Tackle Unemployment Crisis in 2022