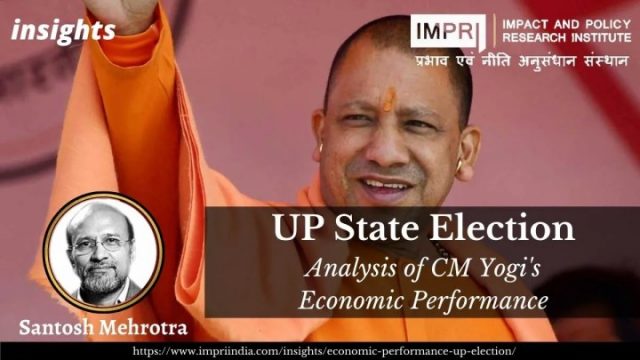 Gross Domestic Product growth in India was plummeting even before the pandemic, and UP is no exception. But still, the Uttar Pradesh government has put out front-page advertisements in leading newspapers that per capita income in UP has doubled in the four years of the BJP government.

The reality, however, is reflected in Figure 1 below (GDP growth).

Official estimates are that the gross state domestic product (GSDP) of UP  grew at a compound growth rate of only 1.95% per annum over 2017-21. In contrast, the growth rate was 6.92% over 2012-17 during the previous state government. Falling growth under the Adityanath government has meant that per capita income in UP has increased merely by 0.43% on average over four years.

Manufacturing showed negative growth of 3.34%  during the Adityanath government as compared to 14.64 %  during the previous regime.

Figures 2 and 3 below show the colossal failure of Adityanath government policies. Overall unemployment increased 2.5 times and youth unemployment by nearly 5 times compared to 2012.

This is a voter base that could be mobilized by the opposition in the UP polls.

This performance of UP is worse under the Bharatiya Janata Party regime, despite the ‘double engine’ of Modi and Adityanath, where both have the largest majority that any government in UP’s history has had in the last three decades. But it is part of a larger crisis of the Hindi belt states of northern-east India.

What are the sources of this larger crisis of economic and social development in India’s Hindi belt?

We have argued elsewhere why in the last three decades the southern/western states of India have diverged in terms of both GDP growth and human development indicators compared to the Hindi belt.

Here we take the argument deeper by taking in our analysis economic and agrarian systems, as well as sociological and political categories into account to understand the phenomena of northern states under-performing compared to the southern ones.

First, the economic bases of the two regions of India (even at a risk of some simplification) were historically different. The agrarian systems of the Hindi belt (part of the Calcutta Presidency) from colonial times diverged significantly from those in provinces of the Madras and Bombay Presidencies. The Hindi belt (including Bengal) had a zamindari system of revenue collection (since the Permanent Settlement of 1793 by Lord Cornwallis).

This involved an intermediary between the peasant and the colonial state to perform the collection function. This was  a brutally exploitative system, which subjected peasants to extraordinary extraction of surplus, meant to feed the colonial state’s appetite for both loot and funds for administration. The Gangetic Plain land was fertile, which only marginally offset the effects of this exploitation of the peasantry.

The second difference between the southern and most of the Hindi belt of north India is sociological in nature. Social movements of lower castes were widespread in much of the south and west. The demography facilitated the emergence of such social movements: 71% OBCs and 23% SCs in Tamil Nadu, leaving a fraction of upper castes; in Kerala,  62% were OBCs in 10% were SCs. By contrast, in UP, SCs are 20.7% and OBCs about 52%. In UP, Brahmins are a very significant 12% of the population, much higher than in almost any other state of India.

This social composition, together with the power equation resulting from the agrarian legacy of colonial times, in the villages, meant that the southern and west states were a fertile ground, even in colonial times, for lower caste emancipation movements (Narayan Guru in Kerala, Periyar in Tamil Nadu, Mahatma  Phule in Maharashtra). These social movements (culminating in the emergence of political parties founded upon these movements) bore fruit after independence in pressure on rulers (and even in colonial times) to focus on social policies that enabled social indicators to rise.

It is not that the northern states did not experience social movements for the empowerment of Scheduled Castes or Other Backward Classes, especially post-Independence. Certain social and political movements in last 30 years broke the Congress dominance in northern states. These are the Yadav-led movement for OBCs in undivided UP and Bihar, the SC mobilization by Jatav leaders Kanshi Ram and Mayawati, the tribal’s mobilization by Communist Party of India (Marxist–Leninist) in Jharkhand, Madhya Pradesh, Odisha, Bihar, Chhattisgarh.

However, neither Zamindari abolition post 1956 nor the land ceiling acts, nor these social movements ever managed to break the hold of feudal forces in these states.

If anything, the dominance of the Congress ‘coalition of caste interests’ for the first four decades was disrupted by the political parties (relying upon certain caste groups), but what emerged in many northern states (especially Bihar and Uttar Pradesh) is multiple parties each articulating the interest of specific sub-castes within OBCs and SCs. In other words, the articulation of marginalized citizens’ interest got fragmented.

Hence these political parties representing caste group interests became captive to the interest of dominant castes within the SCs (Jatavs in UP that constitute half of the 20% of SCs) and OBCs (Yadavs) who constitute chunks of these caste groups. The result was a fragmentation of the vote, with inter caste rivalry and competition for limited resources undermining governance that could have promoted the cause of an inclusive social policy.

This is in complete contrast to the effects of these social movements in southern India on social policy.

The combination of these three sets of factors in several northern states (especially UP) has worked to keep social policy captive to specific sub-caste group interest, rather than the interest of marginalised groups as a whole.

What emerged in the southern states of India, by contrast, was that the entire set of  marginal groups benefitted from social movements, with significant social and economic progress as a result. The dominance of two party systems in most southern states has made social and economic policy competition in them more consistent with the interests of the masses, with each party working for more egalitarian policies. Political parties competed electorally in the south on a similarly inclusive social policy agenda.

Returning to UP specifically, BJP’s success in UP might have been built upon uniting the Hindu vote hitherto fragmented into caste group based parties, but its appalling performance since 2017 on economic growth, employment and inflation bodes ill for the ruling party. It is now resorting to ‘news-making’ (and often, news faking), because now adverts are appearing claiming four lakh government jobs since 2017.

When information was sought through RTI about which departments of UP government provided these jobs, the youth forum ‘Yuva Halla Bol’, which has been campaigning for several years across different parts of India (especially north India) on the issue of growing joblessness among youth, was told the relevant departments/government agencies were unable to provide this knowledge, since they did not have such information.

Similar questions exist over the UP government’s claims about UPSC-based appointments in the state of Uttar Pradesh. It should be noted that before coming to power, the BJP had promised in its manifesto that all vacant posts in government will be filled within 90 days of coming to power.

First published in The Wire, As Uttar Pradesh Heads to Polls, How Does the Yogi Govt’s Economic Performance Hold Up?

Read another piece by the author on employment, Has Chai-Pakoda Employment Helped in Quenching India’s Poverty and Hunger?