Home Insights Under the Shadow of the Virus, a Year of Despair Giving Way...
Facebook
Twitter
WhatsApp
Linkedin
Email
Print 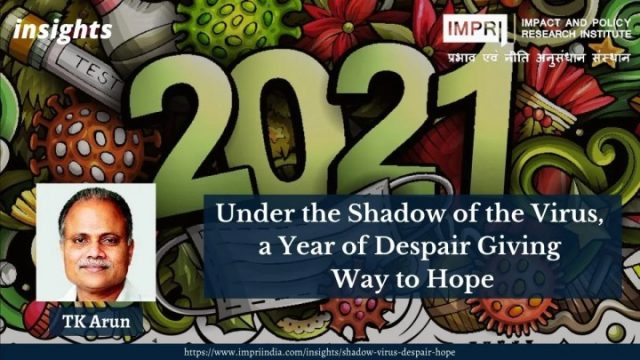 The year that is coming to an end is one in which letters of the Greek alphabet acquired a virulence unimaginable even to those who had shuddered in the classroom at the sight of Sin Theta and Cosine Theta, one in which the ﬂotsam on the Ganga included bodies of the Covid dead by the hundreds. It was a year in which the pandemic’s acknowledged death toll crossed 5.4 million across the world, suggesting an actual count three times as large.

It was a year in which people died, gasping for oxygen, inside hospital wards, waiting for a vacancy in the packed Intensive Care Unit, inside hospital car parks, on the way to the hospital, at home in quiet despair, often labeled as suffering from just a cough and a cold, so as not to embarrass those in power with blame for the miserable end of multitudinous, miserable lives at the hands of the virus.
Yet, as it draws to a close, it is also a year of redemption, with mass vaccination, economic recovery, and, even under the looming threat of a fresh wave of the pandemic, the promise of escape, via an avatar, to a metaverse in the near future.

The year 2021 began with promise and betrayal. A new American president was inaugurated, whose principal quality is that he is not Trump. Yet, that succession was marred by the insurrection of January 6, which underscored the fractures in the world’s oldest democracy. Anti-vaxxers and protesters against Covid restrictions demonstrated the subjugation of citizenship and the mutual obligations it imposes on all its members by the overweening entitlement to individual rights that has taken root in the western psyche, exposing the fragility of their democracy as well. In countries like India, burgeoning democracy has stalled and taken an authoritarian detour.

Vaccine production remained far below the level required to vaccinate the world. Vaccine inequity lets new variants emerge among the unvaccinated, and one of them, Omicron, is now the dominant strain, replacing Delta. Vaccine production is being stepped up, but so is the demand, with even those twice vaccinated now lining up for a booster shot to ward off Omicron. New anti-viral treatments for Covid, from Merck (MSD in India) and Pﬁzer, hold enormous promise in containing the pandemic. The point is to license enough low-cost producers to ﬂood the world with the drugs. India bristles with generic drug producers, who could shoulder this responsibility. But the government has to help them, via compulsory licenses and price controls.

In 2020, China ﬁrmly and indisputably emerged as a superpower, ending America’s unipolar dominance since the collapse of the Soviet Union. China successfully tested a hypersonic missile that traveled around the earth and re-entered the atmosphere over the South Pole, where the means of detecting incoming missiles are sparse, to glide towards its target faster than sound. It gave rise to another Sputnik moment for the US, galvanized all nations with reason to fear an unbridled dragon in the neighborhood into heightened security awareness, and catalyzed the birth of a new geopolitical grouping, AUKUS, comprising Australia, the UK, and the US.

China consolidated its grip on Hong Kong, changed the ‘One Country, Two Systems’ formula to ‘One Country, One and a Half Systems’, with Hong Kongers enjoying some freedoms that still elude those in the mainland. China rattled its sabre at Taiwan, blocked all efforts to isolate Pakistan for its terror-linked money laundering, and continued its forays into the Indian side of the Line of Actual Control. At the same time, attempts by their new Supreme Leader, Xi Jinping, to reinforce his individual supremacy via a new ideology of ‘common prosperity’, has doused Chinese entrepreneurs’ animal spirits with distinctly human caution, dampening some of the Chinese private sector’s dynamism.

Russia is trying to stay relevant, bullying Ukraine and propping up an unpopular Belarussian autocrat. It controls gas supplies to Europe and so has clout that goes beyond its formidable armory and trigger-happy demeanor.

America left Afghanistan, handing over the nation to the Taliban and their Pakistan controllers. The manner of the Nato forces’ departure left observers in shock and awe, at the utter lack of planning and cohesion in their ﬂight, exempliﬁed by the precise drone-bombing of an imprecisely chosen target: a car carrying an aid worker and nine others of his family, including seven children, was blown up, instead of the two terrorists the US military wanted to target. Those of us who have crammed ourselves into the good old Ambassador have little diﬃculty in understanding how 10 people could ﬁt into one car.

Iran elected a new president, a hardliner, who nevertheless has continued with talks to revive the Iran nuclear deal that President Trump had effectively killed. Turkey continued to suffer under Recep Tayyip Erdogan, who, having run Turkey since 2003, has come to see himself as the successor to the Ottomans, and has been trying to emerge as a regional power, helping Azerbaijan in its confrontation with Armenia, claiming offshore mineral wealth Greece thinks it owns and taking sides in Libya’s civil war.

Saudi Arabia is undergoing rapid cultural changes under its Crown Prince Mohammed bin Salman, who is trying to build a post-oil future for his country, with not just petrochemical and metal industries, but also tourism and technology. He has reopened movie halls, put paid to the moral police, is easing up on women’s rights, starting with the right to drive. The United Arab Emirates is following in the same direction. But these powers have not formally ended their war against Yemen.

Notwithstanding the participation of an Arab party in the ruling coalition of post-Netanyahu Israel, that country’s policies towards Palestine remain unchanged. New settlements are being built in occupied lands, including the Golan Heights taken from Syria.

Africa continues to be racked by Islamic radicals and criminal gangs who kidnap hundreds of schoolchildren, hold oil pipelines hostage, and stage wanton attacks on civilian targets. Climate change has produced extended droughts in several parts of Africa, creating not just hunger and want, but also migration and resultant conﬂict.

But the primary cause of conﬂict continues to be ethnic and tribal hostility, besides the reluctance of former dictators to give up their hold on power. Ethiopia is ravaged by civil war, with its Prime Minister Abiy Ahmed, with his Nobel prize for peace tucked ﬁrmly under his belt, personally leading the national army against the forces of the rebel state, Tigre, where people have been starving, their supply lines cut off.

Afghanistan, Tigre, and Yemen form three regions, apart from North Korea, where large numbers could starve to death unless the multinational will is mustered to let humanitarian need make its way through political barricades.

The global economy has been recovering, albeit in a lopsided fashion. Services that require contact cannot really normalize till the virus is vanquished. Money that would have been spent on eating out and travel is being splurged on goods in Europe and America. Added demand is creating additional strain for restarting supply chains. Shipping charges have quadrupled, labor shortages constrain recovery in the US and parts of Europe, and Opec’s decision to squeeze oil output has made energy expensive. The cumulative result is inﬂation, which, monetary authorities recognize, is getting entrenched and is no longer transitory.

Quantitative easing is being rolled back, interest rates are scheduled to rise in America and Europe, and in parts of the emerging world, including in India.
Even as rising policy rates of interest threaten to reallocate footloose capital across national borders and create mayhem on overvalued bourses, the real interest rate is still negative in most parts of the world, and economic growth is expected to remain robust.

A growing, even if insuﬃcient, resolve to ﬁght climate change is putting its own stamp on ﬁnance and economics. Environmental, Social, and Governance (ESG) factors guide where serious money deploys. The Glasgow climate summit made yet more pious noise about slashing carbon emissions kept grievously mum on sucking existing carbon dioxide out of the atmosphere (negative emissions, in the jargon), and left attaining climate goals to national initiatives and corporate ingenuity.

Modular nuclear reactors of the ﬁssion kind and new successes infusion technology hold out the promise of radically changing the energy outlook, but do not stir the public imagination the way green hydrogen and yet more solar and wind projects do. But electric cars deﬁnitely have become a thing.

Cryptocurrencies and NFTs (non-fungible tokens that digitally attest to the originality of a created product), along with De-Fi or decentralized ﬁnance, which hopes to replace banks, ﬁat currencies, and their regulators with blockchains and their smart contacts, beguile technophiles. Early adopters in this tech-underwritten universe hope to pioneer the shift to Web 3.0. We, the stragglers, are invited to join in, providing the moolah for the early movers to realize their dreams of fabulous riches.

India would like to be at the cutting edge of economic recovery and the paradigm shifts in energy, technology, and ﬁnance. But our legislative, governance, and regulatory capacity lag our ambition, notwithstanding the $10 billion subsidies on offer for the domestic semiconductor industry.
The trouble is divisive politics and a xenophobic, obscurantist ideology that attributes, without comprehension, the modern to India’s ‘forgotten’ or ignored ancient.

This combination seeks to thrive on sectarian strife among the people, and naturally, preclude constructive cooperation between the ruling and opposition sides. After being trounced in West Bengal, Kerala, and Tamil Nadu, and after having had to surrender before the farmers’ agitation, the BJP has identiﬁed communal polarisation as the sole viable plank left to them in the forthcoming crucial assembly elections in Uttar Pradesh, Punjab, Uttarakhand, Goa, and Manipur.

The BJP had hoped Prime Minister Modi’s charisma and popularity could counter Mamata Banerjee in West Bengal but was soundly rebuffed. Now, it is relying on sectarian politics to retain UP, Uttarakhand, Goa, and Manipur. Mamata Banerjee’s national ambitions will play out most visibly in Goa, where the BJP can hope to see the anti-BJP vote split among the Congress, the Aam Aadmi Party, and the Trinamool Congress.

The Congress limps in Punjab, after its leadership shot it in the foot, humiliating the old warhorse, Captain Amarinder Singh, and feting a silver-tongued but feckless Navjot Singh Sidhu while sidelining traditional Congress leaders.
But Uttar Pradesh is the key state. Mixing Hindu religiosity with naked political ambition, the Prime Minister and the chief minister have been using Varanasi, its Ghats, and age-old rituals to mount an audio-visual appeal to latent Hindu harkening to an imagined glory of the past. A variety of big-ticket infrastructure projects provide an economic gloss, too. Which way the people of Uttar Pradesh vote will have a large bearing on which way the nation would lean in 2024.

First published at The Federal titled Under the Shadow of Virus, a Year of Despair Giving Way to Hope on 30 December 2021