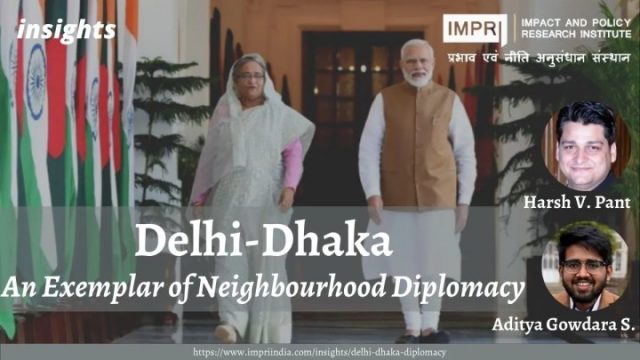 President Ramnath Kovind was on a State visit to Bangladesh from December 15-17. His visit to attend Bangladesh’s 50th Vijay Dibos served two purposes. First, it reflected the historical roots that interconnect India and Bangladesh. Second, it reflects the new realities of a deepening special and ideal relationship between both States.

Throughout the visit, the President took part in celebrations, visited memorials, and inaugurated a temple destroyed by Pakistan in 1971. These gestures were reflective of India and Bangladesh’s mutual struggles against Pakistan. India’s hosting of 10 million refugees, equipping and training the Mukti Bahini, and fighting a war against Pakistan are just some of the sacrifices it undertook while liberating Bangladesh. And both nations want to conserve and ennoble these collective memories for their younger generations to cherish and learn from.

This invite also underlined Bangladesh’s interest in further deepening its relationship with India. Today, the India-Bangladesh relationship can be viewed as a role model for the rest of the neighborhood. To be sure, India and Bangladesh have also had their fair share of differences. If religious clashes and a violent Partition weren’t enough, East Pakistan (Bangladesh) was also cut off from India and exploited to promote insurgencies across the Northeast. The relationship also underwent a tumultuous phase after Sheikh Mujibur Rahman’s assassination in 1975.

But since 2009 Prime Minister (PM) Sheikh Hasina had been able to revitalize Bangladesh’s ties with India. Her priority has been to limit cross-border terror attacks against India by clamping down on the Northeast militants and the ISI-backed extremists and to ensure that political stability in Bangladesh can lead to economic dividends.

New Delhi under PM Narendra Modi reciprocated the sentiment and there has been an unprecedented investment in the relationship. Both leaders have sustained a very positive relationship. They have visited each other multiple times since 2014 and have committed to bilateral engagements. Like other neighbors, Bangladesh is also crucial for some vital Indian interests. It includes limiting China’s influence, overcoming mistrust for India, and promoting economic growth. These new challenges were the reason for India’s desire to invest more in Bangladesh vis-à-vis the Neighbourhood First and Act East policies.

In recent years, India has put in significant efforts to build trust with Bangladesh. India’s willingness to resolve and accept the United Nations tribunal that favored Bangladesh to explore maritime resources is a case in point. The Land Boundary Agreement of 2015 was another landmark development that enhanced trust and neutralized a vital irritant. Also, bilateral trade has tripled to $10 billion by 2021, all within a decade. Promoting social development projects, scholarships, and border markets have also been at the core of this relationship. Bangladesh has also received over 2.18 crore doses of Indian vaccines, the largest that any country has received from India.

Connectivity has been a vital aspect of the relations. Both States have perceived it as a means to promote mutual economic growth and counter China’s growing assertiveness. Investments in Bangladesh generate mutual economic growth and employment, especially in the Northeast. Bangladesh’s economic success portrayed by its development indicators, anti-poverty measures, increase in per capita income, and sustenance of growth has also attracted confidence and investments from India. It is also showing positive outcomes in the Northeast.

To date, Bangladesh has received over 30% of India’s global developmental assistance. India has also provided the former with a credit of $10 billion and has funded over 46 projects. Both States have focused on establishing new and pre-1965 cross-border rail links, bus services, water transit, and trade routes. Bangladesh has also allowed freight carriages and transit from its Chattogram and Mongla ports. In addition, India has also prioritized exporting hydroelectricity, energy, and diesel to Bangladesh in the subsequent years.

These investments and connectivity aspects are also helping India limit China, and Bangladesh to carve its own strategic autonomy. Despite joining the Belt and Road Initiative in 2016, Bangladesh has been cautious of Chinese projects that are economically unsustainable and possess strategic implications. It is aware that increasing dependence on China will only attract more Chinese assertiveness and aggression.

China’s aggressive comments on the possibility of Bangladesh joining Quad and Dhaka’s prompt pushback were just another case in point. Bangladesh has wisely used investments from India, Japan, and the West to limit its over-dependence on China.

The story of India-Bangladesh relations is an important marker in India’s successful Neighbourhood First policy. It is a lesson that has to be learned and implemented across the region that is facing similar challenges and concerns. True, some issues with Bangladesh still need feasible and timely solutions. But the success story of this relationship will ensure that both nations remain committed to finding solutions.

Growing Delhi-Dhaka connectivity and Bangladesh’s economic growth will hopefully lead to a non-partisan Bangladeshi policy and ease illegal migration and trafficking at the borders in the near future. Finally, transnational challenges such as terrorism, the climate crisis, and extremism also leave no option but to demand more cooperation and coordination from these two neighbors, ready and willing to resolve challenges – both old and new.

First published in Hindustan Times Delhi-Dhaka: A model for the neighborhood on 20 December 2021.

Read another piece on Democracy in 21st Century by Harsh V. Pant titled Democracy in the 21st century and its changing realities in IMPRI Insights