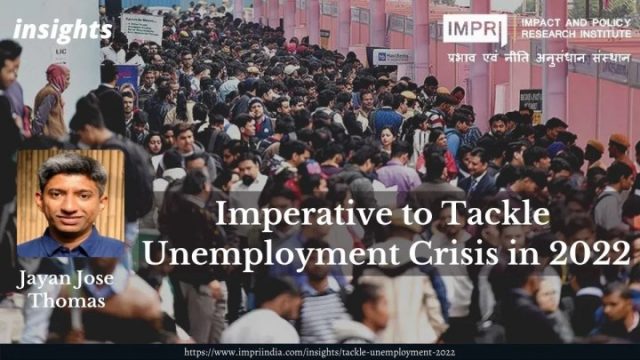 The population in the working-age years (aged 15 to 59) as a proportion of the total is expected to increase to 64 percent in India, while it is set to decline to 59.5 percent in China, by 2030. That there are going to be a larger number of potential workers is indeed a big boon for India’s future economic growth. But, it also presents a challenge for the policymakers — to create new job opportunities for the young.

Agriculture and allied activities such as forestry and fishing provide livelihoods to close to a half (43.5 percent in 2019-20) of India’s total workforce (numbering 471 million in January 2019) but contribute less than a sixth (14.8 percent) to the value of the country’s output. The low levels of per capita value-added, and therefore incomes, of a large section of the working population continue to be an issue of the highest concern.

Historical evidence — corroborated by Nobel Prize-winning economist Arthur Lewis — suggests that with economic progress, workers shift out of agriculture, and move into higher productivity industries and services. The proportion of the agricultural workforce declined in India from 56.5 percent in 2004-05 to 40.7 percent in 2018-19. The rate of decline was faster during the second half of the 2000s, a period of rapid economic growth. Compared to India, the fall in the proportion of the agricultural workforce was much sharper in China, to 26.8 percent in 2008.

The Periodic Labour Force Survey (PLFS) for 2019-20, released in July, provided a surprising result. Rather than declining further, the proportion of the agricultural workforce in India rose between 2018-19 and 2019-20, by close to 3 percentage points (40.7 percent to 43.5 percent). A large part of the increase in employment in 2019-20 was of women who are unpaid helpers. It is likely that this increase in employment was linked to distress, or that it represents a desperate attempt to supplement household incomes.

It may be noted that the numbers quoted here are based on the data collected during July-September 2019, which is the first quarter of the 2019-20 survey period. Therefore, they describe the state of employment in India before the outbreak of the COVID-19 epidemic.

Construction was the major source of employment in India during its high growth phase of the 2000s. The size of the workforce engaged in construction had almost doubled during the second half of that decade (26 million to 49.9 million during 2005-2012) after which employment growth in this sector slowed down considerably (to reach 59.6 million in 2020).

This includes employment in both the organized and unorganized sectors. Employment in organized manufacturing, especially in the large factories, has been rising all along through this period. This implies that there had been severe job losses in micro and small manufacturing enterprises in India through the 2010s. The hurdles to growth include inadequate availability and high cost of credit, infrastructural bottlenecks including power shortages, competition from imports, and the after-effects of the 2016 demonetization.

The service sector has been a silver lining. It generated 53.3 million new jobs between 2005 and 2020, two-thirds of which came during the period after 2012. Trade, hotels and restaurants, education, and professional, business, and allied services (which include the information technology sector) were some of the significant creators of new jobs.

The impact of COVID-19 has been severe on lives and livelihoods. It has deepened the crisis of employment and incomes for the poor in India. Tackling this crisis should be a priority for policymakers in 2022. Action will be needed on multiple fronts, including investments in human capital, the revival of the productive sectors, and programs to stimulate small entrepreneurship. ‘The Make in India’ program will have to devise clear-cut industrial policies to enhance the technological capabilities of the domestic industry.

India will be able to reap the demographic window of opportunity only for a little over a decade, after which the country may be grappling with the possibility of growing old before getting rich. So for India, formulating effective employment and industrial policies is a case of now or never.

First published in MoneyControl In 2022, policymakers must tackle the unemployment crisis on a priority basis on 23 December 2021.

Spotify: Listen to Jayan Jose Thomas at IMPRI #WebPolicyTalk- The Need for a National Employment Policy