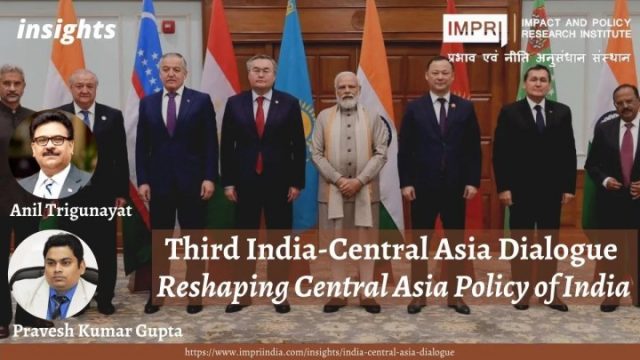 The unsavory developments in Afghanistan have accentuated the importance of Central Asia even more. While Russia is trying to secure her backyard, the Americans are trying to move back in and China is basking in the glory of its already enhanced economic engagement and trying to fortify it even more for her geopolitical and geo-economic objectives.

India, another historic and civilizational neighbor with an umbilical connect, has beefed up her outreach to Central Asia with greater vigor and focussed vision through bilateral exchanges and regional interactions especially in the last few years.

The third India-Central Asia Dialogue held in Delhi on December 19, has exhibited an exalted mutual trust and cooperation between India and Central Asia. Indeed there is a huge potential between the two regions. Consistent mutual contacts at multiple levels are the key to the success of bilateral and regional cooperation. Indian External Affairs Minister Dr. S Jaishankar met all five of his counterparts bilaterally and jointly and highlighted the need to work on 4cs- commerce, capacity enhancement, connectivity, and contact. This will further consolidate India’s presence in this region.

All five Foreign Ministers called on PM Modi who himself had visited all central Asian countries and called it an extended neighborhood and felicitated them for the upcoming 30th anniversary of the establishment of diplomatic relations.

India shares close historical and cultural linkages with the Central Asian region. The mutuality of rich cultural heritage has laid the foundation of diplomatic engagement and people-to-people contact in modern times. The bilateral relations have gained momentum in the recent past. PM Modi’s visit to the five Central Asian countries in 2015 and India’s permanent membership to the Shanghai Cooperation Organization (SCO) in 2017 have paved the way for elevated strategic cooperation between India and Central Asian Republics after the launch of Connect Central Asia Policy in 2012.

In addition to this, the India-Central Asia dialogue mechanism has honed India’s outreach to this region. No wonder, Kyrgyz Foreign Minister Ruslan Kazakbaev, whom I also met separately, claimed that India today is a strategic partner of all CA countries and security and safety of the region is central to our dynamic interactions. The Dialogue also sought to establish cooperation between specialized national institutions including in the fields of finance, renewable energy, information, digital and other advanced technologies, and green energy.

The India and Central Asia strategic cooperation has benefited from this dialogue framework. Many of the initiatives presented at the First Summit, which took place in Samarkand (Uzbekistan) on January 13, 2019, have come to fruition, including forming an India-Central Asia Business Council (ICABC). Many additional development projects are in progress. In 2020, The Second Dialogue was convened virtually due to the COVID-19 pandemic.

India has extended a $1 billion Line of Credit (LOC) for priority development projects in energy, healthcare, connectivity, IT, agriculture, education, etc. In this line, the third dialogue has set the stage for intensifying bilateral relations.

In August this year, the Taliban takeover of Afghanistan presented serious challenges for both India and Central Asia. Three Central Asian nations Uzbekistan, Tajikistan, and Turkmenistan share a direct border with Afghanistan and have been vulnerable to the consequences of the developments in Afghanistan. They adopted a varying response to the Taliban government based on their domestic compulsions. India’s positive contribution to Afghanistan’s development and reconstruction has also ebbed.

Last month, India hosted the Delhi Regional Security Dialogue on Afghanistan. The National Security Advisers/Secretaries of Security Councils of Central Asian republics, Russia, and Iran collectively agreed to adopt a common approach to dealing with Afghanistan. During the recent visit of President Putin to India, a new bilateral high-level mechanism was created to coordinate approaches towards the evolving situation in Afghanistan.

As expected, Afghanistan was the main agenda of the Third India-Central Asia dialogue. The Ministers underlined their strong support for a peaceful, safe, and stable Afghanistan, underlining the need to respect its sovereignty, unity, and territorial integrity. They also agreed to continue providing emergency humanitarian aid to Afghans. The foreign ministers also emphasized the significance of UN Security Council Resolution 2593 (2021), which states explicitly that Afghan land must not be used for terrorist sanctuary, training, planning, or funding, and calls for coordinated action against all terrorist organizations. They decided to maintain close cooperation on the Afghan situation.

In this Dialogue, an emphasis on expediting commerce, connectivity, capacity building, and contact was laid by EAM Jaishankar. The trade and commercial linkages are directly dependent on connectivity whose absence has exponentially affected the economic linkages. India’s development of Chabahar port in Iran and its inclusion in the International North-South Transport Corridor (INSTC) can address the connectivity challenges. Being landlocked, all the Central Asian countries have expressed their interest in developing connectivity between South and Central Asia.

Central Asia presents a viable space for India’s pharmaceuticals industries. Due to a lack of connectivity, there is a huge potential in establishing manufacturing units of pharmaceutical products. In addition, cooperation in the healthcare sector, especially in medical tourism, is promising. The India-Central Asia Dialogue also highlighted that India and Central Asia’s rich civilizational and cultural legacy needs to be used widely to boost bilateral relations. It was also brought out that cooperation in the education sector may be expedited. Indian universities like Sharda and Amity have already been operating in Uzbekistan, which may be extended to other countries.

Remarkably, consistent dialogue and discussions at multiple levels in recent years have taken this relationship to a new orbit. India’s relations with Central Asia still hold huge potential. It is also worth noting that the convergence of interest between the two regions will continue to fill the gaps and develop closer cooperation in unexplored avenues. India-central Asia dialogue has proven instrumental in enhancing the India-Central Asia development partnership.

As a special and smart gesture, India has invited all the heads of Central Asian states to participate as Chief Guests at the Republic Day next year as India celebrates her 75 Azadi ka Amrit Mahotsav. New Delhi is also expected to organize an India-Central Asia leaders summit in January 2022. This will advance India’s outreach to its extended neighborhood and be a game-changer as the region wades through the great power competition.

Read another piece on Russia and Putin’s visit to India by Anil Trigunayat titled Putin’s visit: From Russia with resolve in IMPRI Insights

Read another piece on West Asia by Anil Trigunayat titled West Asia: Winds of Change are Welcome in IMPRI Insights