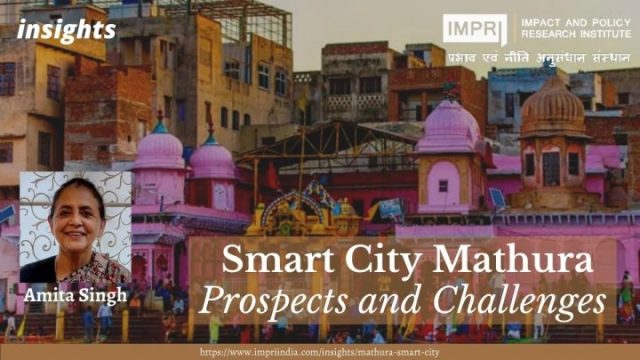 There are many reasons for my close familiarity with Mathura-Vrindavan, a holy district of Uttar Pradesh, a pot brimming with color, music, and swirling dance forms of Krishna, a land where women do have a relatively upper hand within families due to what they describe as ‘Radha power’ irrespective of the stench of patriarchy all around the state.

Being excited to have been reading about its smart city initiatives through newspapers, a chance to visit after two years of pandemic woes could not be missed. I couldn’t wait to reach there, but the visit left me disappointed despite road widening, multi-level parking, and flustered yet dutiful policemen spooking intemperate traffic round the clock. The city seems to be ignored, misunderstood, and exploding with adamant visitors and dictating locals. If pilgrimage is considered tourism, visitors to the place are livelihood generating factories for locals as well as conservators of cultural heritage, but are they treated with care, respect, and safety that they deserve?

The discourse on Mathura-Vrindavan’s smart city status began in 2013 when the World Bank office at the Kasturba Gandhi Marg held a meeting with invited experts on the feasibility of the project and how to fill the gaps in needs assessment studies being planned around the cityscape. I had insisted during this meeting that revitalizing pilgrim cities was a priority and also shared plans on Mathura-Vrindavan. After which nothing was heard from the Task Force till the launch of the National Smart Cities Mission as urban renewal and retrofitting program by the government in 2015.

The Ministry of Housing and Urban Affairs (MoUHA) as a nodal agency describes the project objective, in its vision statement, as an initiative to ensure that these cities are “liveable, inclusive, sustainable, (and) have thriving economies that offer multiple opportunities to people to pursue their diverse interests”.

This year the city was included as a major activity area for the project after Uttar Pradesh Energy Minister Shrikant Sharma held a meeting with officials of the Mathura-Vrindavan Development Authority (MVDA) and directed its chairman to speed up traffic control and decongestion of markets. Initially, only 100 cities were selected to be made ‘smart’ by 2020, but the project was extended due to its pathetic completion rate of just 19 percent by 2019. The end date has not been specified, but 2023 seems to be a shared deadline. For the initial round of 100 cities Rs. 1,000 billion was allocated and 5,151 projects were identified on the ground.

The glory of Mathura-Vrindavan both in its historical, cultural, and educational elements need not be exaggerated as there are innumerable accounts available to document this information. The British Imperial Gazetteer (1908) can be looked into, but more of it comes from accounts available from Indica’s four books by the ancient Greek historian Megasthenes (C. 300 BC). He had given a most authentically complete account of India ever known to the outer world.

In 634 AD, Hiuen Tsang mentions it as Mot’ulo, which contained 20 Buddhist monasteries and five Brahmanical temples. More recently many historians on the city’s history such as the famous KP Jayaswal, Buddha Prakash, and RK Mukherjee have vividly brought out the importance this city has in the wider landscape of India.

If history was seriously considered by smart city planners, the city would have needed some extra attention for the suffering and brutalizing it had undergone by many invaders starting 1018 AD with Mahmud of Ghazni and later Sikander Lodhi who looted its gold, diamond, and precious decor on the city walls almost 27 times.

The city gasped for breath in Indian history due to its proximity to Delhi, the seat of power where all invaders headed to. Committed and passionate city planners see life in a city that breathes and resonates with relationships around it. The Smart City project is laden with technologists and administrators largely from the corporate world or compliant officers from the IAS, etc, who focus on finances, media advertisements, task completion, and target achievement. All this is important but holistic planning supersedes these brick and mortar substances in a policy. Ironically, this is lost to this culturally, architecturally, and philosophically rich and enlightening pilgrim city.

The city suffered immensely due to its dying water bodies, lakes, and wells, while its holy river the Yamuna was pumped with city sewerage. The workability of water filtration plants was never a priority in the smart city plan, but skill development without providing a local marketplace for them won the city laurels for no reason. Reclaiming the livelihood of ancient boatmen tribes who are sunk in abject poverty by redesigning and replacing their half a decade old boats missed a thought for planners as a cue to kick-start boat tourism for the twin cities.

What some of us had suggested in 2013 was to incrementally start a center to periphery cleaning and decongesting effort for the city with the mobilization of local ecological, religious, and also women groups. Today we see multilevel parking spaces thoughtlessly planned in the middle of the city setting at abeyance traffic decongestion needs. One sees many e-rickshaws plying side by side huge SUVs due to unimaginative city planning. The periphery is now fully cluttered with residential skyscrapers and it would be a death knell for the city once they all become occupied.

The worst neglect has been on the ground level comfort providing solutions that go beyond ossified minarets of project plans by technocrats. The city is overpopulated with monkeys, dogs, and cattle. Chief Minister Yogi Adityanath has provided funds to open gaushalas (cow shelters). We passed through a number of them stuffed with cows and cattle anxiously waiting for food and water throughout the day which as the information gathered sometimes comes once in two days.

Around the holiest places of Raman Reti, Dwarkadheesh temple, and Vrindavan lanes from ISKCON to Bihariji temple starving and depressed dogs and monkeys display their skeleton under a drying skin to passers-by.

I wheeze for an ounce of holiness in this pilgrim city. The city remains ‘unsmart’ if projects continue to be driven without holistic planning. NITI Aayog is unable to deliver unless it gets advisory groups to plan more thoughtfully and holistically, keeping in mind not just physical requirements but also inclusivity beyond caste and speciesism.

First published in Firstpost How Mathura’s smart city challenge is more than just brick and mortar on 25 December 2021.