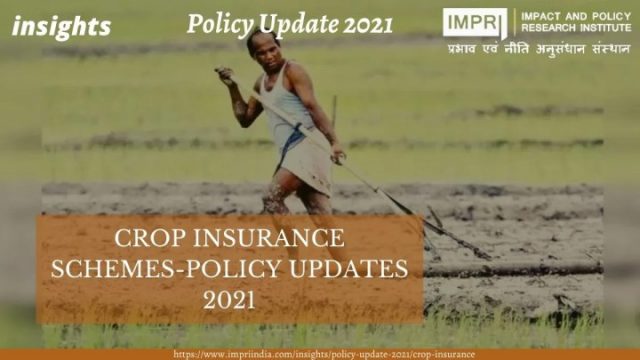 Over two-thirds of the working population in India is engaged in agriculture and it contributes 18% to India’s GDP which clearly signifies it is the backbone of the Indian economy. Every sector or industry is either directly or indirectly dependent on agriculture.

But unfortunately, farming is very uncertain because it depends on the weather which indeed is unexpected. Natural calamities like floods, droughts, cyclones, earthquakes, forest fires, etc., or fluctuations in market prices, pest and disease attacks and heavy rainfall can destroy the cultivation within seconds.

Government mandates the coverage under these four if the farmer has availed crop loan otherwise it’s voluntary. The main objective of these schemes is to provide financial support to the farmers even at the time of failure of crops due to unforeseen calamities and also to restore the creditworthiness of the farmers arising out of crop loss and nonpayment of crop loans. Hence, farmers can stabilize income against crop loss and also adopt progressive practices and high-value inputs in farming that helps to sustain production and food stability in the country in a way.

The four schemes have been discussed in brief below:

It was introduced for implementation in the Kharif season 2016. Under this scheme, insurance is provided to protect food crops, horticulture crops, oilseeds, and commercial crops notified by the state government authorities.

It facilitates a maximum premium for all farmers: Kharif- 2%, Rabi- 1.5%, Commercial crops- 5%. It covers the risk of loss of yield to standing crops due to non-preventable risks like drought, dry, spells, flood, inundation, pest and disease attacks, landslides, natural fire due to lightning, storm, hailstorm and cyclone which is available only up to a maximum period of two weeks, The scheme also promotes the use of remote sensing technology and drones.

It provides exclusive insurance protection for Coconut Palm growers with a premium rate per palm ranging from Rs. 9.00 (plant age group of 4 to 15 years) to Rs. 14.00 (in the plant age group of 16-60 years) in which 50-75% subsidy of premium is provided to all farmers.

This scheme includes seven sections: Crop Insurance (PMFBY/WBCIS), Loss of Life, Accident Insurance, Student Safety, Household, Agriculture, implements, and Tractor Crop Insurance has been made mandatory. Through this scheme, farmers will be able to avail all requisite insurance products for farming through a single application form.

Despite around Rs.16,000 crores allocated for the crop insurance schemes in the Budget every year;  as per the study report of the Associated Chamber of Commerce and Industry of India (ASSOCHAM) and Skymet did in 2015, less than 20 percent of farmers in India are insured, exposing a vast majority of the farming community to the vagaries of weather which lead them to take desperate steps.

In one of his replies Shri Narendra Singh Tomar, Union Minister of Agriculture and Farmers Welfare wrote that coverage under PMFBY has increased to 30% of Gross Cropped area in the country from 23% in erstwhile crop insurance schemes in 2015-16 due to better features in the scheme.

The coverage of non-loanee farmers, for whom the coverage is voluntary, has increased from 5% under erstwhile schemes in 2015-16 to 42% during Kharif 2019, which shows the acceptability and progress of the scheme on a voluntary basis, though it decreased in the second year of implementation due to the increased complications in the process to avail these, due to the improved features of the scheme and efforts made by the Government and other stakeholders, coverage is showing increasing trends.

The Department of Agriculture, Cooperation, and Farmers Welfare has selected 18 companies including 5 public sector companies for better implementation of the schemes. Although some of them haven’t contributed potentially so it is required to review and assess the performance of these companies. The government should revise the operational guidelines of the scheme after discussing with various stakeholders.

There are various loopholes in the implementation of the schemes like the area insured for a particular crop is more than the crop area sown in most of the cases, loanee farmers do not comply with the provision of compulsory insurance, there are multiple loans on the same land, delays in the settlement of the loans. The determination of the premium rate is not transparent; banks and agricultural insurance companies seem to exploit illiterate and innocent farmers by not providing the benefits of the scheme.

How Artificial Intelligence and Machine Learning can help to augment the benefits of the current crop insurance scheme?

AI and ML have become indispensable to every sector. Similarly, these can also be used here for better implementation and results from these schemes.

Monitoring crop growth using IoT platforms/Growing Degree Days model which uses hyperlocal temperature and humidity to estimate the growth and development of plants which could help to predict the estimate of crop yield at the farm levels. Computer vision can play an important role in preventing weed control effectively. Drones can be used for soil and field analysis, planting, crop spraying, monitoring,  irrigation, and health assessment. To reduce crop cutting experiments and deliver speedy claim settlement, imagery for crop cutting experiments can help to a large extent.

It can be concluded that despite various reviews and changes in the scheme, most of the farmers are unaware and even those who know are not interested to get insured due to the premium cost.

Hence, the government is required to advertise these schemes of risk-mitigating tactics in agriculture. Easy availability of credit is indispensable for encouraging the promotion and adoption of insurance products. Strict vigilance from the government or respective bodies over the insurance companies and proactiveness of the companies would lead to eliminating the loopholes in the schemes to an extent. Along with this, farmers should also be taught other ways of mitigating risk like alternatives to farming and diversification. Non-farming sources of income help the farmers to pay the premium of the insurance during the growing season of the crop.

Finally, factors like education and social participation can play a major role in creating awareness among the farmers. The use of AI and ML can make the process even more transparent and effective, and clearly, there is a need for the government to adopt ways to implement the scheme successfully.