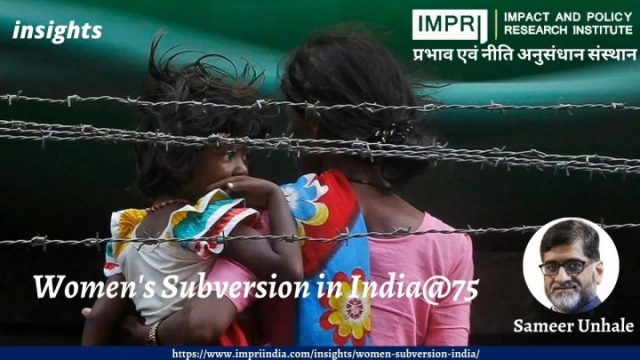 The status of women, often at political, economic (mostly as property rights , ancestral or otherwise, equal pay for work), social dimensions is normally discussed. Though not discussed academically, the sexual dimensions, or the social attitudes toward sexuality has a very powerful influence on the status of women in India.

At a psychological level Freud tried to address this contradiction/ dilemma of baser instincts and the societal value /moral structure which he mentioned as super ego . However the right of women, in its feminist mode, was probably not considered. The middle ages, feudal agrarian social frame work , that was dominant in last one and half thousand years created a strange concoction, adversely affecting the status of women , in religious , social and legal frame work. It was reproductive slavery that got eulogised in religious and social values and norms ….. Mangalsutra , bindi , pativrata etc etc..

Newer advances in surrogacy and IVF and banks will have a major impact on the institution of marriage and family in say coming two decades. The feeling of fear and shame, that religion, social norms and law have woven around the biological capacity to conceive and give birth to a child, issues of menstrual health, female infanticide, crime against women is difficult to comprehend on its purpose and its methods. Rational economic actor would ideally require women to be more valued/economically and further into family/socially.

The attempt to contain, regulate and direct the baser instincts into less socially disruptive structures probably led to the various institutions like marriage and family. However they favour men over women. It can only be hoped that the post industrial economy and society would be favouring women more as they would now be involved in generating wealth.

The status of women, as determined by religion, social norms and law circle around these facts and technical advances in reproductive sciences could be as liberating to women as the invention of steam engines did to the institution of slavery.