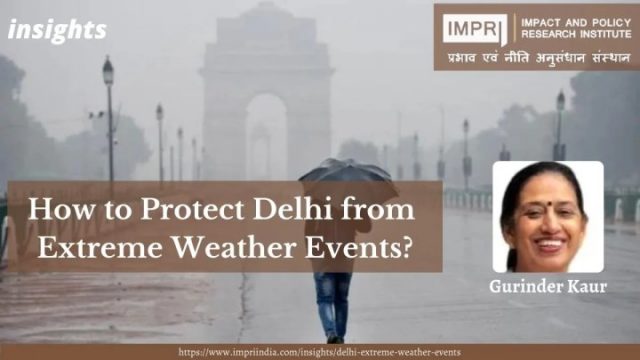 During the year 2021, from January to December, extreme weather-related events, such as extreme rainfall, and maximum and minimum temperature in a day or of a month occurred in the city of Delhi. The year began in January with a seven-day long record of the cold wave in Delhi since 2008. According to the Indian Meteorological Department, when the minimum or night temperature in a plain area is 4.5 degree Celsius lower than the average temperature or recorded at 4 degree Celsius, that area is considered to be affected by cold waves. In January alone, 56.6 mm of rain fell in Delhi, breaking the record of the last 21 years, where the average rainfall is 19 mm in January.

In the first four months of 2021 from January to April 2021, five weather records were broken. Temperature was normal till mid-May, but on May 16, a cyclone with heavy rains and strong winds from the Arabian Peninsula caused severe damage from Kerala to Gujarat. Delhi received 119.3 mm of rain on May 19 under the influence of the Tauktae cyclone. As per record, it was the heaviest rainfall in Delhi in May. The same day Delhi’s maximum temperature was just 23.8 degree Celsius, the lowest for May since 1951 and down 4.1 degree from the mean maximum temperature of 27.9 degree Celsius in February this year.

The maximum temperature in Delhi, which was hit by a heatwave in June, broke another record on June 29, 2021. Delhi recorded a very high temperature of 43.5 degree Celsius, seven notches above the average maximum temperature. Monsoons usually reach Delhi annually around June 27. In 2021, the monsoons reached Delhi on July 13 after a lag of 16 days, breaking many old records of rainfall in Delhi. The month of July recorded 507.1mm highest monthly rainfall during the last 18 years.

They broke the 120-year record on October 18 with 122.5 mm of rain. Delhi usually gets two or three western disturbances in the month of November, but they did not reach Delhi in 2021. November 2021 has been the highest air pollution month on record so far and one in which the average monthly maximum temperature was 27.8 degree Celsius, the lowest since 2013.

The weather has been warmer than usual in December, but despite this fact, three days of cold winds from December 19 to 21 broke the record of cold. On December 29, Delhi received 1512.4 mm of rainfall, the highest since 1933 (1534.3 mm). The record-breaking trend of weather-related incidents in Delhi started in August 2020.

Although all types of extreme weather events are related to climate change, there are a number of local factors that contribute to the increase in the number of outbreaks and the depth of their impact. Local causes mainly include increasing urbanization, population, concrete spaces(residential areas, roads, bridges, etc.), and an increase in greenhouse gas emission activities (increasing number of cars, industrial units, thermal plants, brick kilns, etc.), increasing air pollution, increase in slum areas, and declining areas under green areas and water bodies.

With the rise in the average global temperature, various countries of the world have been hit by extreme natural disasters during the year 2021 like the United States of America, all European countries, China, Japan, Indonesia, Canada, and others have suffered from heat waves, droughts, wildfires, record rains, and floods.

The sixth IPCC report released in August 2021, revealed in detail that in the coming decades, winters will get shorter and summers will get longer. Some places will experience an increase in the incidents of drought as a result of heatwaves and some places will face floods due to heavy rains.  Data from six organizations, including NOAA, and NASA revealed 2021 was the seventh warmest year on record in the world and according to the Indian Meteorological Department 2021 was the fifth hottest year on record in India.

Various states of India have been hit hard by heavy rains and floods before and after the onset of monsoons in 2021. According to a report by India’s Ministry of Earth Sciences, India’s average temperature rose by about 0.7 degree Celsius between 1901 and 2018. According to a 2020 report by the Council on Energy, Environment and Water, 75 per cent of the country’s districts have been hit hard by climate change due to rising temperature.

The report provides a district-wise study of natural disasters that occurred between 1970 and 2019. According to the report, there were 250 catastrophic natural disasters between 1970 and 2005, but the number has risen to 310 between 2005 and 2019. In these five decades, the incidents of floods have increased eightfold and the incidence of drought has increased 13 fold.

Due to climate change, the withdrawal of monsoon winds is taking place only after the new date since 2017. This date was September 27, 2017, September 29, 2018, October 9, 2019, September 28, 2020 and October 6, 2021. With the rise in the average global temperature, new records of extreme weather events are being set in all parts of the country including Delhi.

The record breaking weather events in Delhi resulting from climate change are no stranger than what is happening in other cities of the world. These extreme events are resulting from climate change, but the increase in the number and intensity of these extreme events is also attributed to local factors. According to NOAA, a three-year study of Baltimore, Washington, Richmond, and some other cities, temperature in areas with high concrete densities where trees are in small numbers recorded 17 degree Fahrenheit higher than in shady areas.

The concrete areas in Delhi are also steadily increasing which is having a direct effect on temperature. A study conducted by the National Remote Sensing Center commissioned by the National Capital Region for review of Regional Plan-2021 revealed that the built-up area grew by 34.5 per cent between 1999 and 2012. The increase was witnessed at the cost of a decrease in  ​​green spaces and water bodies as the area under these two areas decreased by 22.5 per cent and 5.9 per cent during this period respectively.

According to the study, wastelands in the National Capital Region, including  gullied land, waterlogged, barren, rocky, and river sand declined by 19.6 per cent, but the area stone quarrying and brick kilns increased by 159.59 per cent. Concrete areas are warmer than green spaces (vegetated areas) which increases the inflow of hot air.

Hot air with high temperature can absorb more moisture which can lead to more rain in a short time. One of the reasons for the record-breaking rainfall in Delhi is the rising temperature because of the rapidly increasing concrete buildings. Deforestation is also associated with rising local temperature. Trees not only block the sun rays, they also provide shade and cool air through evapotranspiration.

According to India’s State of Forest report released in January 2022, the area under trees in Delhi has increased marginally by 0.44 sq km while the forest area has decreased by 0.62 sq km. Older trees and thicker canopies contribute more in keeping the temperature cool than newly planted trees. Work on a plan to plant 3.3 million trees in Delhi by 2025 has started this year, which is expected to increase green spaces by 25 per cent by 2025.

One of the reasons for heavy rains in Delhi in May due to cyclone Tauktae is deforestation and quarrying in the Aravalli hills. Due to the high temperature in Delhi, which has a high capacity to absorb water, it received heavy rainfall under the influence of humid winds from the Arabian Sea.  The Aravalli hills have been degraded and the trees on these hills have been reduced in large numbers in the name of economic development.

A report published by the World Economic Forum on January 17, 2022 has highlighted the fact that although 80 per cent of the world’s total GDP is contributed by cities, cities also emit 75 per cent of the greenhouse gasses that contribute to global warming, the city of Delhi is a part of these cities.

Every day an increasing number of vehicles, industrial units etc. in Delhi city are emitting huge amounts of greenhouse gasses in the environment which is polluting Delhi’s environment. A research study conducted by Arunabha Ghosh has revealed that high intensity of heat released in the major cities, coupled with locally generated air pollution, triggers aerosol load that contributes to cloud formation. Urban structure traps the wind and acts together to bring bursts of intense rainfalls in Indian cities. Delhi, with a cocktail of extremely high projected heat rise and severe air pollution, is likely to suffer critically from the trend.

In order to control the weather-related incidents in Delhi, India must ensure that the promises made at international level are fulfilled so that the average global temperature can be controlled to a safe limit. To curb these incidents at the local level too, the Union and Delhi governments should first of all reduce the number of private vehicles by making the means of public transport very efficient, this will reduce greenhouse gas emissions. People when facilitated with public transportation would naturally be inclined to reduce their use of private vehicles, reducing millions of vehicles emitting greenhouse gasses from the roads.

With this reduction in the use of private vehicles, parking spaces will also become vacant. The government can turn those vacant places into green spaces like parks. The government should ensure that pollution treatment devices are installed in industrial units so that sulfur dioxide, nitrogen oxide, and smoke particles do not pollute the environment of Delhi.

The Union and Delhi governments must conserve green spaces, dense forests, old trees, and stop deforestation in the name of economic development, remove illegal encroachments on all kinds of water bodies (lakes, seasonal streams, Yamuna river) and ban any kind of dumping of waste in them. Trees and water bodies contribute a lot in keeping the temperature in place.

At the same time, the people of Delhi must rapidly change their ways of living to adapt to an eco-friendly way of living. All these changes are the need of the hour to save the green cover which will in turn save our environment too.  Time to act is now because tomorrow might be too late.