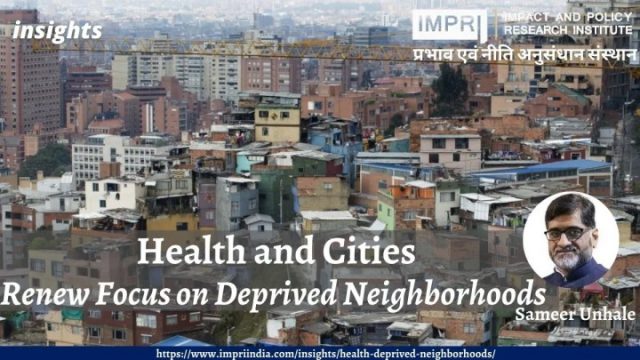 Access to Public Health facilities for urban poor in cities and town of global south has always been an area of concern. City Governments, by and large tend to be engineering dominated. Thus, road network and mobility, water supply and drainage, storm water and street lighting, projects related to markets , convention centres, ICT etc tend to find primacy in policy and financial resources in urban setting.

Despite many efforts, the health, education and skilling sector tend to struggle for attention in Municipalities and other institutions in urban sector like metropolitan region development authorities, smart cities , development Authorities, private SEZ’s for budgets and policy action. In this back drop, any infectious diseases reaching epidemic or pandemic stage, water borne or air borne, brings out the fault lines in provision of civic infrastructure and access to civic services for urban poor and in poor neighbourhoods.

In many cities, municipal organization along with local organizations and the front line workers toiled very hard, even at the personal risk, to continue efforts over multiple waves of covid. The story of grit and determination of these individual heroism is commendable. However this Calls for efforts to study, analyse and convert the lessons learnt into SOPs, programs and policies for local bodies. The institutional empowerment for adaptability and mitigation, for any crisis or emergency, and making the organization resilient and inclusive is extremely crucial.

City has emerged as most important territorial pattern of organizing people, economy and society in 21st century. The history of this century , to large extent, will be determined by cities and towns, including urban neighbourhood. The way cities dealt with pandemic in urban poor neighbourhoods requires special focus in academic , media and policy circles ,documentation and experience sharing across cities of global south.

A Collaborative experiment was tried after first wave with help of anaclaudia with CityAlliance from Rio de Janeiro , Brazil and Utkarsha Kavadi from AIILSG Mumbai. The mid level functionaries working in municipal government in cities from Latin America, Asia and some organization working with Africa viz covid experience. It was surprising to learn that many cities do face similar kind of challenges despite geographical variation. This has an important implications of greater possibility of collaboration and cooperation amongst mid level functionaries of municipal or city governments and academic institutions /Multilateral agencies for Institutionalization sharing platforms.

Experiences from Cities like Mumbai , focussed on personalized attention and follow up with all patients for emotional, medical and logistical support with multiple phone calls at decentralised ward level control rooms and directly connecting to data line of national testing agency Iike ICMR were innovative, considering the population of over 13 million.

Use of Data science tools like AI algorithm to predict possible hot spots in urban poor neighbourhood was useful. Many cities were seen setting up municipal quarantine and isolation centres, temporary covid hospitals where residents of urban poor could be provided with isolation, otherwise not possible in small houses very dense localities.

Noteworthy efforts were done by local political workers of all hues and colours, local NGOs/CBOs, local media for provision of daily needs rations in poor neighbourhood in cities and towns, packed food and more importantly bridging the information gap amongst local authorities and public. Over 70 Smart Cities SPV, all around India, including Pune, pimprichinchwadsmartcity also saw use of Integrated Command and control Centres (ICCC) and network of cameras were used in various aspect of covid containment measures.

Innovative use of CityApp like Digi thane by Thane Smart City, could manage almost 50 million on line engagement during earlier phases of covid for a city of half a million families of the city in wide range of city living. Using geospatial technologies, and new technology of ICT has tremendous potential to be used for all aspects of civic life for urban neighbourhood. As always, the ability of converting the ideas of technology, climate, participation within municipal system in cities and towns is always a challenge.

Many national government, state/provincial government initiatives were seen where food security by cheap food supply/coupons and direct benefit transfer (DBT) of certain amount to vulnerable sections were seen during or just after the period of lock down period. When we try to consider the pandemic issue , from frame work of disaster management methodology, we realise that as rescue measures in immediate duration of covid infection are important.

The relief and rehabilitation in medium and long term measures need also to be considered, and more so in urban poor neighbourhood. The economic impact of pandemic at local level might evolve in uncertain way which may not be predicted and some thinking would be necessary. The contraction of tax income at local level could create pressures in municipal finance which may require need of support by higher level of governance.

A new framework, focussing on urban poor neighbourhood, beyond slums paradigm or building cement pathways, gutters or common latrines, would be necessary. The social , health and economic support to families, individuals, small home business, higher skill development of young adults will have to be executed with compassion.

One may hope that such activity could also pave way for renewed efforts on a vigorous and well funded mission for health in urban areas, with primacy to urban local bodies and their controlling structure, with strong components for outreach, maternal and child , nutrition, communicable and non communicable diseases and public health post at every urban poor neighbourhood.