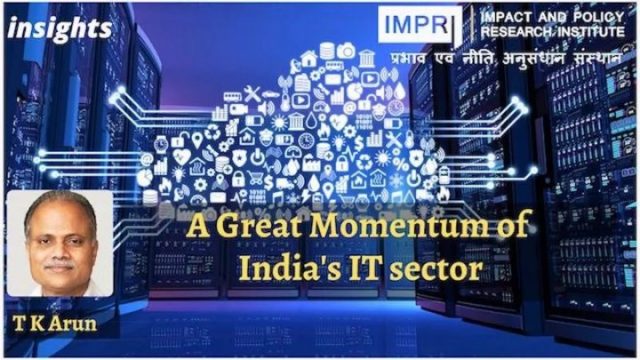 Introduction about India’s IT sector

India’s expertise in digital governance can be a major form of foreign aid and Indian soft power.

ET Government felicitated, last week, nine state governments for their innovative use of information technology in governance. Increasing use of IT to improve healthcare, education, engagement with the department of motor vehicles, transparency, ease of doing business, welfare payments and monitoring is a remarkable trend, often not noticed.

This trend lends itself to a number of observations.

One, it is taking place across India. The states being felicitated were three from the North (Punjab, Haryana and Uttar Pradesh), three from the South (Tamil Nadu, Andhra Pradesh and Telangana), one from the West (Rajasthan), one from the East (Orissa), and one from the Northeast (Assam). The selection was made with the help of Deloitte and entailed no attempt to be politically correct. The picture that emerges is one of increasing use of IT across geography, political orientation of the party heading the state government and income levels.

Two, it is fortuitous that ET Government spotted the trend and brought ministers from all these states together for them to discover that several states tackle the same challenges using disparate methods, some better than others. There is no official effort or platform to help states compare notes (the Niti Aayog does compile IT practices, but do not bring state government IT representatives together to spot best practices and enable adoption).

Three, with 5G telephony about to take off across the country, there is scope for a great deal more of technology-enabled service delivery, for which the states and the Centre must prepare.

Four, mere IT-enablement of governance will not translate into widespread popular access, unless the citizenry is made aware of the possibility and encouraged to make use of it

Five, if Uttar Pradesh, with a per capita income below $1,000, is capable deploying IT in governance, so would be most developing countries.

These form the basis for a set of actions by the central and state governments and by political parties and voluntary organization.

One: A certain degree of centralization is intrinsic to the use of IT. India urgently needs a data protection law and certain other enabling laws and regulations to make 5G work. This can be done only at the central level.

The main thing about 5G is not so much high data throughput as its low latency. Latency is the gap between sending out a signal and seeing its desired result. People are yet to figure out a great many realistic use cases for 5G, apart from gaming, autonomous driving and remote surgery.

Remote surgery can revolutionise healthcare. Surgeons are rarer in rural India than those who know all the lines of Vande Mataram in a gathering of those shouting Vande Mataram. A surgeon sitting in a town can conduct minor surgery in a remote village, whose only health worker is a nurse, with the 5G network transmitting both a real-time, granular view of the surgery in progress and the surgeon’s instructions that guide the robotic arms carrying out the operation.

IT that Touches People

For this to happen, the nurse would need to be trained to assist in remote surgery. Further, central regulation must provide clarity on how to allocate responsibility among the telecom operators, robotics vendors, software providers and the medical personnel involved, in case something goes wrong with the surgery.

Two: Political parties and voluntary groups should mobilise ordinary folk to make use of IT in governance. The colonial government passed assorted Factory Acts and labour laws, laying down norms. Trade unions used these norms to organise workers and secure benefits. Treat the official IT facilities as the equivalent of those labour norms, to empower the people vis-à-vis the bureaucracy.

Three: Set up a special, standing secretariat of the Inter-State Council to assess and share state level experience and experiments in IT. The ISC is a constitutional body and has a greater role for the states than the Centre-dominated Niti Aayog.

Four: The secretariat can generate and grow expertise within legislative committees, state level agencies and civil servants, who volunteer to learn. Digital governance should not be surrendered to a bunch of consultants.

Five: Let that secretariat also keep abreast of the latest trends in cyber security and train state level trainers to prepare all government personnel and vendors for cyber threats.

Six: Offer India’s experience and expertise in digital governance as official aid to developing countries, a tad more empowering and a tad less debt-laden than Belt and Road projects.

Along with Aadhaar, the Unified Payment Interface and the India Stack APIs that enabled UPI, the DigiLocker and much else, there is a lot India can offer the world in the use of IT for popular welfare.

Read another piece by T K Arun- Women being the Scapegoat in Every War: The Release of Bilkis Bano Rapists in IMPRI insights

Read another piece by T K Arun – India in 2047: Wishful Thinking in the Season of Hope in IMPRI insights

Read another piece by TK Arun –Is there a Counter to Nitish Kumar’s gambit ? in IMPRI insights