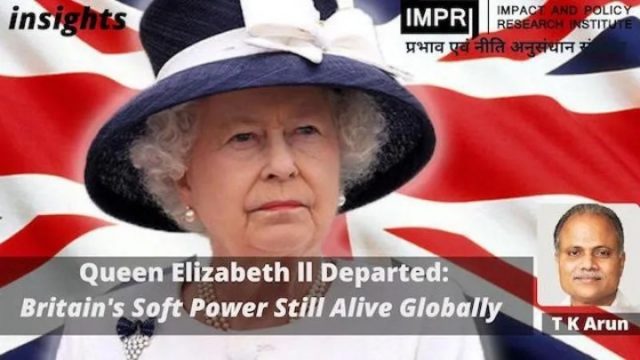 Queen Elizabeth provided a solid symbol of Britain’s collective identity; the greater the soft power, the greater disruption caused by the passing of such power’s tangible embodiments.

Queen Elizabeth II’s death  has been widely reported, commented on with empathy and mourned in much of the world, even in countries that had ceased to recognise the British monarch as their own head of state as early as at the time of her coronation in 1952 (Pakistan figured as one of the realms under her charge on that occasion, India’s neighbour having turned a Republic only in 1956).

This speaks to the soft power Britain wields in the world, far out of proportion to the nation’s economic or military clout.

The ubiquity of the English language in the world of globalised business is, of course, the biggest vehicle of British soft power. But that, it might be argued, owes more to the heft of the American economy than the British. But there is no gainsaying the authority of the Oxford English Dictionary when it comes to determining lexical propriety and rectitude.

English is the language of pop music, whether sung by Sweden’s Abba, the Dutch Vengaboys or South Korean sensation BTS. You could be excused for putting that down to the size of the American music market, and that certainly matters.

But two other factors help. Wherever the British decided to bag the natives of their far flung empire into that swaddle they called the white man’s burden — burden of deliverance from stunted humanity, of course — they created consumers for all things British, and that covered a pretty large part the world’s geography and an even bigger part of the cultural universe.

Britain, after all, was the nerve centre of an empire on which, in contemporary parlance, the sun never set. Of course, Spain was the first power to create an empire that spanned all the degrees of longitude on the globe. Not surprisingly, quite a few of the most played songs on Spotify today are in Spanish.

From music to literature to sports

It wasn’t just that the British created a market for its language’s cultural products, appointing English as the normative domain of culture, through the device of introducing English studies in its colonies, to stand in for the Classics used back home to civilise those of the masses who could be redeemed via education. Britain also produced and supplied the most popular products to cater to that market.

In popular music, they range from the Beatles, the Rolling Stones, Led Zeppelin and Pink Floyd to the Spice Girls. In literature, just Shakespeare would be enough to establish England’s hegemony, but he came in the company of Jonathan Swift, Charles Dickens, Wordsworth, Shelley, Keats and Willian Blake, the Bronte Sisters and Jane Austen, James Joyce (Irish, admittedly), Conan Doyle and Agatha Christie, RL Stevenson, Rudyard Kipling, Enid Blyton and Roald Dahl, George Orwell and George Eliot, besides countless others.

India stayed on in the Commonwealth of Nations, a collection of former British colonies, even after gaining Independence and becoming a Republic that designated its own President as the head of state, because there were not too many forums around where developing countries could exchange notes and seek help.

Now, it is a total anachronism, with even some tiny Caribbean nations questioning why they should remain in the Commonwealth. But every time India celebrates its athletes’ achievements in the Commonwealth games, it cements and amplifies British soft power.

Wimbledon in tennis, the Lord’s in cricket and ManU in football energise not just sport but also Britain’s pre-eminence in these fields.

Karl Marx might have been a German, but he is associated with the British Museum, where he pored over voluminous government reports on the condition of workers in British factories, and the Highgate Cemetery. The joke on Bengaluru’s civic conditions had Rishi Sunak shifting to ‘10 Drowning Street’ in Bengaluru, after losing out on 10 Downing Street.

Granted, soft power does not depend solely on the colonial past or the artifice of BBC’s vaunted objectivity, which somehow survives its professed inability to decide which side is lying when Russia and Ukraine both blame each other for shelling the Zaporizhzhya nuclear power plant under Russian control, as if the Russians would shell a facility at and around which they have stationed their own personnel. It depends on new achievements, renewal of old traditions of excellence.

Britain is home to advanced technology companies, such as ARM, which produces the intellectual property underlying the processors running our smartphones, and DeepMind, the artificial intelligence company that is revolutionising biomedicine with its ability to forecast the shape of millions of proteins, and which Google purchased some years ago.

Britain is home to advanced technology companies, such as ARM, which produces the intellectual property underlying the processors running our smartphones, and DeepMind, the artificial intelligence company that is revolutionising biomedicine with its ability to forecast the shape of millions of proteins, and which Google purchased some years ago.

A nation’s soft power centres on some symbols of that nation’s identity. Princess Diana and Downton Abbey might have been media sensations, but Queen Elizabeth provided a solid symbol of Britain’s collective identity. The greater the soft power, the greater the disruption caused by the passing of such power’s tangible embodiments.

James Bond, Rolls Royce and the halo of excellence over Oxbridge will likely protect the transnational popularity of the British constitutional monarchy beyond its transient individuals, because power needs embodied representation.

This article was published in The Federal as The Queen is dead; British soft power remains globally all-pervasive on 9th September 2022.

Read another piece by TK Arun – Women being the Scapegoat in Every War: The Release of Bilkis Bano Rapists in IMPRI insights

Read another piece by TK Arun – Democracy Deficit : Dalit Boy killed for drinking water from pot and stabbing of Rushdie in IMPRI insights

Read another piece by TK Arun – India in 2047 : Wishful Thinking in the Season of Hope in IMPRI insights

Read another piece by TK Arun – Is there a counter to Nitish Kumar’s gambit? in IMPRI insights

TK Arun, is a Senior Journalist and Columnist based in Delhi