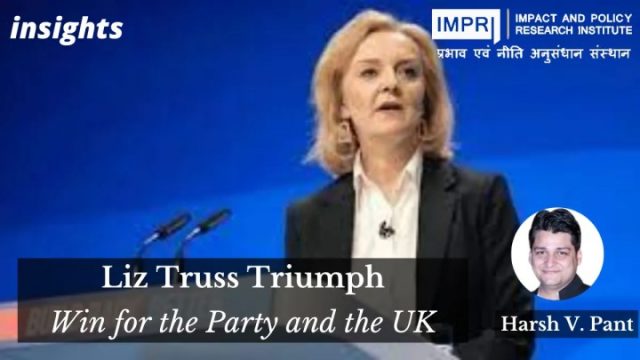 Besides steering the economy through one of its most challenging phases, Truss will also have to undo the damage done to the Conservative Party by Boris Johnson.

Power is a strange beast; it allows extraordinary leeway when you possess it, but the moment it deserts you, you are relegated to the footnotes. The moment Boris Johnson decided to step down in July after quitting as the leader of the Conservative Party, saying it was “clearly now the will” of his party MPs that there should be a new leader, he became almost invisible.

Though he stayed on as the prime minister until a successor was chosen, his power had dissipated. He was a needless distraction for a nation that was keen to move on. The void was filled by the drama of his succession that ended today when Liz Truss was finally announced as the winner of the Conservative Party leadership contest after weeks of a closely fought and often bitter competition.

Truss will be taking over as the new British prime minister tomorrow after meeting the Queen at Balmoral in Scotland to complete the transfer of power. This visit to Balmoral will also be a first as traditionally the Queen welcomes new prime ministers at Buckingham Palace in London. But the monarch has not been well for some time and faces issues with her mobility, necessitating the visit by the new prime minister to Scotland.

The challenge of an aging monarchy under a cloud is, however, just one, and probably the least tricky of the many issues that Truss will have to grapple with as she takes over a divided party and a nation badly in need of a sense of direction after Johnson’s misgovernance and lack of discipline.

Johnson, who won one of the largest political mandates in 2019 after leading the Conservatives to their biggest majority at Westminster since Margaret Thatcher’s 1987 election victory, could not translate it into an effective governance agenda and lurch from one crisis to the next. Truss will be succeeding him at a time of great intra-party and national turmoil. Rishi Sunak, who was defeated by Truss, actually had the backing of the majority of Tory MPs.

But he could not generate confidence among the 1,60,000-odd Tory members who saw him as too disconnected from their day-to-day lives. His role as the chancellor during the pandemic and the lockdowns and his assertion that he would want to be a responsible manager of public finances, thereby not announcing a tax cut like his rival, did not really endear him to the Tory rank and file.

Truss may have won by presenting herself as the self-styled heir to Thatcher but given her background as a former member of the Liberal Democrats who once wanted to abolish the monarchy and also wanted to remain in the EU, traditional Tories are skeptical of her ability to bring the party together after a bruising leadership battle. Sunak had targeted her economic policies by suggesting that he would rather lose the Tory leadership race than “win on a false promise.”

The economic challenge will be front and center as the British economy passes through one of its most difficult phases with inflation running above 10 percent, the British pound at its lowest against the US dollar in years, and the cost of living crisis hurting ordinary Britons hard. Amidst signs that the British economy might enter into a recession in the coming months, Truss has promised help within a week of taking over. A freeze on energy bills seems to be in the offing to help manage soaring inflation.

The new British prime minister might be keen to revive the economy by cutting taxes, but there is a looming danger that this could result in inflationary pressures and destroy public finances. Major state intervention in the absence of adequate resources may seem irresponsible to some but given energy inflation and a broader surge in prices demands from the street for saving businesses, livelihoods, and lives cannot be overlooked. The potential for social unrest remains high as economic distress morphs into larger societal distress. Not surprisingly, contingency plans are reportedly being put in place by the UK police to manage civil unrest.

This economic crisis is linked, in some ways, to the Ukraine question that will continue to shape Truss’s foreign policy trajectory. She will, of course, continue with the UK’s steadfast support for the Ukrainians but it is clear that across Europe, the costs of this war are becoming more palpable. There is no real solution in sight at the moment. In fact, the two sides seem to be digging in for the long haul. Yet as winter sets in, the streets in western Europe are likely to get more restless and policymakers will have to come to terms with it. Truss will be no exception.

In the ultimate analysis, however, Truss will have to make the Conservative Party the party of serious governance once again, something to which the legacy of Boris Johnson has done lasting damage. The Labour Party, after years in the wilderness, is watching its chances with glee, as it takes the lead in opinion polls.

The Truss versus Sunak battle has exposed the inherent contradictions of the Tories and unless Truss manages to rise to the occasion, as demanded by this critical inflection point in British politics, all her effort to win the Tory leadership would have been in vain. Truss now has the power that she was seeking but as the Bard has reminded us: Uneasy lies the head that wears a crown.

This article was first published in Indian Express as Liz Truss takes charge of a divided party and a UK badly in need of direction on September 6, 2022.