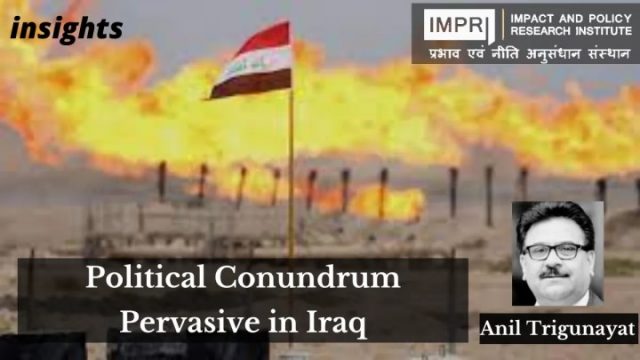 Iraq’s problems do not seem to go away. Any effort for domestic stabilization always meets with an unequal and more intense opposing force. Politico- religious leaders hold the sway. External powers play their own games in keeping their stables always charged. People are totally dissatisfied and disgruntled by the political dispensation at least since 2003. The removal of Saddam Hussein should have led to some stability and a way forward to meet the democratic aspirations of the ordinary Iraqi but that precisely is not the case.

In the last two decades situation in this oil-rich country has continued to worsen. US intervention to remove Saddam on a fabricated pretext has unleashed the unforeseen instability in Iraq and the forces of radical extremism in the region and beyond burgeoning into the ultra-radical ISIL (Daesh) that has become a global challenge and nemesis.

Last week’s violence is a continuation, symptom, and reflection of this conundrum that prevails in the society and polity of the country which has been divided on the basis of religion and ethnicity. Moreover, the distribution of powers on the basis of the confessional system has its own severe limitations as it tries to accommodate and apportion the power among the Kurds (President) Sunni (Speaker of the Parliament), and Shia as a Prime Minister. Elections are held but the acceptance of results is not there. No clear winners with an adequate majority have emerged hence stitching alliances becomes mandatory. Not an easy way out in a deeply distrustful and divided breed of politicians.

The outcome is prolonged uncertainty and power wrangling among various groups and the invariable and uncondonable delay in government formation will further disenchant the ordinary Iraqi who is looking for stability, food, water, energy, employment, and a functional political dispensation. They are left with no option but to take to the streets. T

ishreen protests by the people from 2019 onwards are a testament to the grassroots frustration, prevailing corruption, and lack of public services. They have also been disenchanted by the viability of the political process itself hence their participation in the electoral process is around 40% which should be a sign of worry for the politicians whose legitimacy will be at stake.

The last elections about a year ago (October 2021) called earlier to diffuse the Tishreen crisis, threw up an unclear mandate. But the Shia Cleric Moqtada Al Sadr of the Sadrist Movement, who has hitherto been a kingmaker, won the largest number of seats. But that was not good enough and he has been unable to form a coalition with other Shia parties with greater allegiance to Iranian leaders Ayatollah Khomeini and Khamenei.

But parties with Iranian affiliation and patronage did not do well at the hustings especially the pro-Iranian Fatah alliance, representing the former paramilitary alliance Hashed al-Shaabi (Popular Mobilisation Forces), which suffered acute losses. They rejected the results, calling them a “scam”. While Sadr won 73 seats the pro-Iranian group could muster only 17 seats (down from 48) in the 329-member parliament. Sadr tried to bank on his Sunni and Kurdish supporters to form the government.

Moreover, Al Sadr has been trying to dissociate from the Iranian influence or their Shiite leadership and is against the interference of Tehran and the presence of US forces in Iraq. He also accused pro-Iranian Popular Mobilization Forces (PMF) of interference. However, the twist happened when frustrated Sadrists MPs resigned on June 10 to force the formation of government or reelection. As per extant provisions, their votes were passed on to the next bloc (Coordination Framework) which is pro-Iranian that eventually became the largest group by default.

They decided to nominate (July 25) Mohammed Shia Al Sudani, a former Minister that led to the ongoing crisis. Finally, Muqtada al Sadr decided to resign from politics stating that all institutions linked to his Sadrist movement will be closed. But this did not prevent but rather enraged his supporters who breached the Green Zone and occupied Parliament and other buildings. Several people were killed and injured. Sadr asked his supporters to not indulge in violence and vacate the premises which they gradually did, but perhaps only temporarily.

Sadr also has some legitimacy issues as well as an insufficient religious sanction. Grand Ayatollah Katheer Al Haeri in retirement urged his supporters to follow the religious leadership of Iranian Supreme Leader Ayatollah Ali Khamenei for spiritual guidance. Since Sadr also depended on al Haeri for legitimacy and succession it took the wind out of his sail and may have provoked his ‘Sanyas’ from active politics.

Sadr lamented “It saddens me a lot what happens in Iraq; I apologize to the Iraqi people, the only ones affected by the events. We had hoped that there would be peaceful protests, not weapons.” Moreover, another major spiritual leader Ayatollah Ali Sistani’s reluctance to support Sadr would have decimated his chances to lead a united Shia front. Hence unbridgeable crevices may have led to the setting of the Sadrist sun. Or is it too early to assess that- only time will tell!

Meanwhile, the conundrum continues and the caretaker Prime Minister Mustafa al-Kadhimi is treading a cautious path. He tried to call an all-party meeting to resolve the crisis but Sadrists declined as they would prefer a fresh election to overcome the stalemate. Finally, he also threatened to resign in protest at the political uncertainty and fed up with the ‘duplicity of state and non-state actors. At the same time, the Iranian Foreign Minister during his discussions with the Iraqi counterpart stressed the need to settle the tensions in Iraq within the legal framework and by maintaining the Baghdad government’s authority.

As of now, all the balls are in the air but if indeed al Sadr has retired from politics and does not interfere further, the pro-Iranian group may be able to carry the day and end the political crisis otherwise it might lead to a more fluid and dangerous situation for the hapless Iraqis, whose patience is wearing thin.

This article was first published at Vivekananda International Foundation as The Iraqi Political Conundrum on September 6, 2022.

The Gorby Factor in the Context of India | September 8, 2022