Home Insights Women being the Scapegoat in Every War: The Release of Bilkis Bano...
Facebook
Twitter
WhatsApp
Linkedin
Email
Print 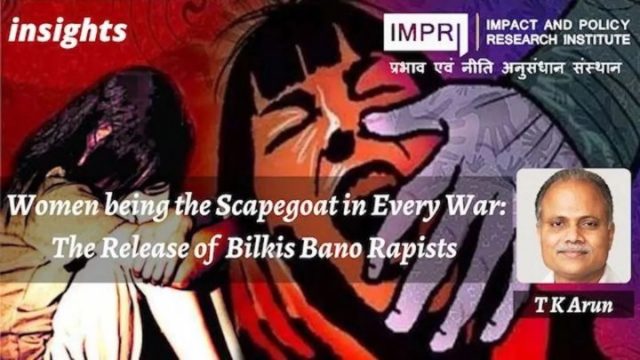 Bilkis Bano’s rapists were greeted as heroes and garlanded because that act advances an ongoing war, in which women are raped to demonstrate the rapists’ dominance over the victim’s community.

We have seen any number of columns expressing shock and horror at the remission of the life sentence given to those convicted for a particularly gruesome episode of the 2002 Gujarat riots, in which a pregnant Bilkis Bano was raped, beaten up and left for dead by a gang of men, who also killed members of her family, including a child, whose head was smashed against a tree trunk. The convicts did not just walk free, they were greeted as returning heroes, with garlands and vermilion smears on their foreheads.

Some have drawn attention to the missing horror and outrage that followed in the wake of the gruesome gang rape and torture, in 2013, of Nirbhaya, a young woman in Delhi, who died of her injuries.

The difference in response to the two cases of sexual assault is significant. In Nirbhaya’s case, it was a case of the sexual violence that males of just two species of the animal world are capable of, humans and chimpanzees. No other animal commits rape.

In Bilkis Bano’s case, she was raped as part of a war.

“The holding up of women as symbolic bearers of caste, ethnic or national identity can expose them to the risk of attack. The widespread occurrence of rape in times of conflict has attracted particular attention and has been seen as directly related to the position of women in communities as bearers of cultural identity. The rape of women in conflict situations is intended not only as violence against women, but as an act of aggression against a nation or community,” notes the International Committee of the Red Cross, in its study, Women Facing War.

The study goes on to list the ‘uses’ of rape as an instrument of war noted by Susan Brownmiller, in her pioneering book on sexual violence, Against Our Will: Men, Women and Rape. It includes the rape of the defeated enemy’s women by the victorious army to show its strength; soldiers raping as a display that the defeated men cannot defend their own women (rape as humiliation); rape as a display of the conqueror; rape as a prize or payment for soldiers (who are rarely paid) – the “war booty”; rape as a way to measure victory and to prove the success and masculinity of soldiers; rape as an attempt to destroy the enemy through the destruction of the reproductive capacity of “their” women by impregnating them with the rapists’ children (rape as genocide); rape to spread hate and thereby keep men fighting; rape to spread fear amongst civilian populations to make them flee an area (rape as ethnic cleansing); rape as torture; rape as a means to brutalize, humiliate and terrorize; rape because soldiers are commanded to do so as a means of warfare.

In his book, Pakistan, or the Partition of India, Dr BR Ambedkar catalogues a string of episodes of communal violence and says: “These acts of barbarism against women, committed without remorse, without shame and without condemnation by their fellow brethren show the depth of the antagonism which divided the two communities. The tempers on each side were the tempers of two warring nations. There was carnage, pillage, sacrilege and outrage of every species, perpetrated by Hindus against Musalmans and by Musalmans against Hindus — more perhaps by Musalmans against Hindus than by Hindus against Musalmans.”

When India got freedom from the British, Congress leaders who formed the government assumed the war was over and the newly Independent nation could begin to redeem its tryst with destiny. A section of Indians was not willing to declare peace. They continued with the war. Mahatma Gandhi was one of the prominent victims.

The Constitution adopted by Independent India sought to make this war irrelevant, by substituting democracy, with its promise of equal rights to all, regardless of identity, rather than rule by either community over the other, as the operating framework of the nation. Those who continue to prosecute the war reject, in effect, democracy as well, and will not be satisfied until they establish Hindu Rashtra.

“If Hindu Raj does become a fact, it will, no doubt, be the greatest calamity for this country. No matter what the Hindus say, Hinduism is a menace to liberty, equality and fraternity. On that account, it is incompatible with democracy. Hindu Raj must be prevented at any cost.”  No, that is not from a speech by any contemporary ‘sickular libtard’, but from the latest icon being appropriated by the Hindutva Brigade, Dr Ambedkar, in his book, Pakistan or the Partition of India.

One Bilkis Bano is enough of a blight on a nation’s conscience. To prevent more such atrocities, the war must be brought to an end — by the victory of democracy, rather than of either community.

The article was also published in The Federal as Men and Rape: When the garland becomes a weapon of war on 23 August 2022.

Read another piece by T K Arun – India in 2047: Wishful Thinking in the Season of Hope in IMPRI insights

Read another piece by TK Arun –Is there a Counter to Nitish Kumar’s gambit ? in IMPRI insights