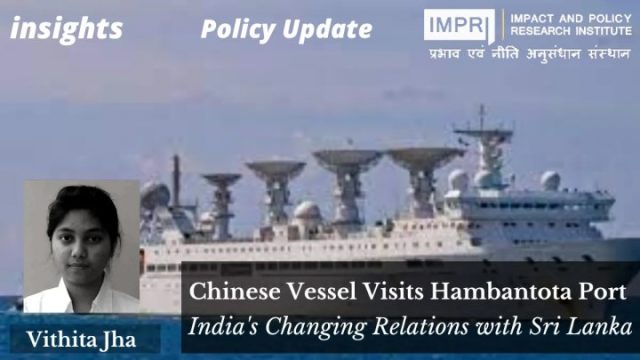 The recent controversial visit of the Chinese Vessel Yuan Wang 5 to Hambantota Port in Sri Lanka manifests a new future for transforming diplomatic ties between India and Sri Lanka. The latter’s inclination toward China has called into question India’s foreign policies and strategies. In this article, I will elucidate the changing nature of India and Sri Lanka’s relations.

As a result of the political and economic turmoil it is now experiencing, Sri Lanka has fewer diplomatic alternatives to it when addressing China. Its frequent indecisiveness initially ended in permitting the Chinese dual-purpose naval ship, Yuan Wang 5, to be docked at the Hambantota Port on the southern coast. This occurred despite India articulating its security concerns over the issue, which alluded to Sri Lanka’s possible tilt toward China.

As a threat to Indian security, China’s growing tight grip over the Indian Ocean has also become a concern for US-led West as the Chinese vessel reached the port with “Long Live China and Sri Lanka Friendship” banners.

The vessel used for space, satellite and intercontinental ballistic missile launches is not the first to be in Sri Lankan waters, causing tension in India- Sri Lanka ties. In 2014, two Chinese submarines berthed at Colombo Port perturbed India. However, in 2017, the then prime minister and now president of Sri Lanka, Ranil Wickremesinghe’s denial of Chinese submarines during Indian prime minister Narendra Modi’s visit catered to Indian sensitivities.

Though Dhaka or any other CSC member has not expressed India-like concerns over Yuan Wang 5, Bangladesh has refused China-built Pakistan’s PNS Taimur. Ahead of Sheikh Hasina’s September visit to New Delhi, the Bangladeshi government may have taken into consideration genuinely held Indian concerns. In response, Sri Lanka has given PNS Taimur permission to dock at Colombo Port. This has also piqued the interest of the Indian strategic community.

This has come at a time when India is at the forefront of extending financial help and humanitarian aid to Sri Lanka, which is facing a steep economic crisis. India has supported Sri Lanka with more than $3.5 billion as credit, currency swaps, and several shipments of food, fuel, and fertilizers. India, conveying its concern to Sri Lanka about Yung Wang 5 being docked in the Indian Ocean and to find out its “real purpose”, has evoked a harsh response from China that, without naming India said, “it was senseless to pressure Sri Lanka”.

Is China trying to (re)establish a New World Order?

However, China’s stronghold over the Sri Lankan economy and its ninety-nine-year lease of Hambantota port is a prominent example of “Chinese Debt-Trap diplomacy”. With Sri Lanka at its weakest, China is using the moment to showcase its military and strategic intent to establish a new world order in the broader region by encircling India in its “Strings of Pearl Strategy”, a proposed hypothesis by the United States. India’s 60% of trans-shipment cargo is handled at Colombo Port, raising concerns for India.

China’s friendlier relations in South Asia and the Indian Ocean than in Southeast Asia and the Pacific (it faces opposition from Taiwan, territorial disputes in the South China Sea and East Asia, and myriad frictions with the US and Australia) have contributed to its establishment of “Special Economic Zone” around Colombo Port City and a new economic commission to be funded by China. This has elevated India’s concern and future expectations from other CSC members since mutual concerns and respect build regional associations’ legitimacy.

The docking of Yung Wang 5 has altered the ties between India and Sri Lanka, manifesting Sri Lanka’s alignment with China’s economic diplomacy. However, it should not be overlooked that India has held its ground in assisting Sri Lanka during its crisis for humanitarian needs and the island’s own self-interests unlike China which refused to restructure the Sri Lankan debts and pushed it towards unsustainable loans. Practising its vision of the “Neighbourhood First” policy, India’s aid to Sri Lanka is oriented toward the welfare of the Sri Lankan people.

By fostering cooperation in fields of technology, development and communication, India can make notable gains in Sri Lanka as it has already done with the agreement on manufacturing and gifting Dornier aircraft to Sri Lanka. India’s Chief of Navy’s visit to Sri Lanka to donate the aircraft that will now be supervised by an Indian team only elucidates India’s building of strategies to counter China in the Indian Ocean. With good diplomatic relations with Sri Lanka on maritime security, India can be a step closer to achieving its ambition of emerging as a regional player.

India’s diplomatic engagement and assistance to Sri Lanka are well considered in politics of compulsion, need, and willingness. China’s investment and loans to Sri Lanka still outweigh India’s financial assistance. Even India is thoroughly aware of Sri Lanka’s need to convince China to restructure its loan in case, it wants its “IMF rescue plan” to work. While China’s global image keeps eroding with its assertive ambitions toward nations like Sri Lanka, India can continue with its engagement and assistance.

Therefore, as an emerging nation of power among its Indo- Pacific partners, India needs to carefully curate its strategy to deal with the incident in order to avoid further military or strategic influence of China that can undo its diplomatic gains of past years.

Vithita Jha is a Research Intern at IMPRI, who is pursuing her Masters in English from University of Delhi.