Home Insights Its been 6 months since Russia-Ukraine War and we are doing WORSE...
Facebook
Twitter
WhatsApp
Linkedin
Email
Print 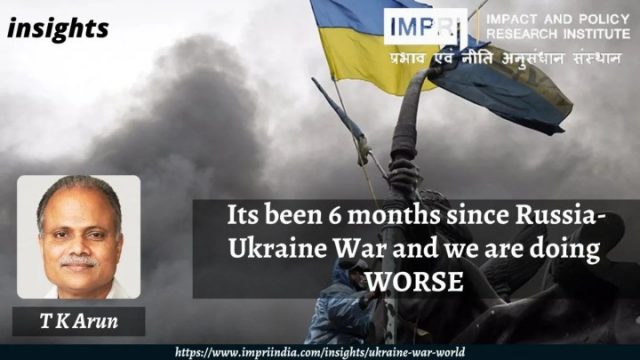 Six months after Russia’s invasion of Ukraine, and the West’s sanctions on Russia, curbing its export of oil, gas, food, and fertilizer, the world is a more miserable place, with higher prices, lower growth, diminished ability to combat Climate Change, and greater political instability. Yet, every country has not had an equal draught from the chalice of misery: some suffer more, some less, and some others, a whole lot less.

The developing world has certainly got a bad deal, with higher inflation than in the rich world. On the whole, greater depreciation of their currencies, translating into higher prices for energy, whose price is, for the most part, designated in US Dollars. Lower local currencies, and globally more expensive energy and food together form a prescription for higher interest rates — except, of course, in Turkey, where President Recep Tayyip Erdogan believes he can invert the laws of economics.

Higher interest rates crimp the recovery from the pandemic — except in China, where the government’s Zero Covid policy, and ill-timed attempts to rein in the over-leveraged real estate sector do the job of squeezing growth more efficiently than high interest rates can, so much so that the Chinese have actually cut their policy rates.

High prices, low growth, and pent-up popular anger over poor governance and corruption have created extreme political instability in much of the developing world. Sri Lanka saw a popular revolt that overthrew the strongman President Gotabaya Rajapaksa. In Pakistan, army-assisted dissension among allies saw the government of Imran Khan lose the confidence of the legislature. The only long-lived democracy to come out of the Arab Spring of the early 2010s, Tunisia, gave way to strongman rule. Somalia, Male, and Mozambique see greater levels of Islamist insurgency.

The Democratic Republic of Congo suffers from a greater level of internal strife. Bandits, and gangs of abductors have extended their grip over larger swathes of Nigeria. Economic hardship helped the corrupt former President of South Africa, Jacob Zuma, foment trouble over his arrest. Lebanon, Egypt, Somalia, and the Tigre region of Ethiopia see acute shortage of wheat, dependent as they have been on imports from Ukraine, and Russia.

Much of Latin America has seen regime changes, with a swing to the Left, even before the Ukraine war. Colombia recently joined Mexico, Argentina, Chile, Peru, Bolivia, Venezuela and, of course, Cuba in a second Latin American Pink Tide. The biggest of them all, Brazil, is expected to elect the Workers’ Party champion Lula da Silva as President, to replace Latin America’s Trump, Jair Bolsonaro, in October.

The rich world does not suffer uniformly across its expanse spanning North America, Europe, and Japan. Japan is the least affected: despite a currency decline of almost 20 percent, inflation is 2.3 percent, unemployment is 2.6 percent, policy rates are zero, and the current account is positive. The economy has been growing robustly, by post-1990 Japanese standards.

The US, of course, has seen inflation of an order not seen since the 1980s, driven by food and energy prices. Yet, it is nothing of the sort you would expect in a country that ran a fiscal deficit of 25 percent of GDP, in order to cushion the economy from the effects of the pandemic. Long-term interest rates are still low: the yield on 10-year government bonds is 2.9 percent, after four consecutive increases in the US Federal Fund rate to 2.25-2.5 percent as of now.

Unemployment is at a historic low, with more job openings in the economy than there are people looking for work. Politics stands in the way of the rational solution to the skills shortage faced by the US economy: faster immigration.

The place in the rich world worst impacted by the war in Ukraine is Europe. It suffers a much higher rise in the prices of food and energy, higher rates of unemployment, as compared to the ally from across the Atlantic that is egging it on to finance and arm Ukraine, so as to prolong the war, and weaken Russia all the more.

The Economist cites research that posits near-quadrupling of energy prices in the United Kingdom, compared to their level in 2020. With apparent Russian resolve to prevent Europeans tanking up on reserves for the winter, the flow of gas through the Nord Stream 1 pipeline has been reduced to about a fifth of its normal capacity. Germans are gearing up for a winter of gas shortage, partial shutdowns at industrial plants long accustomed to relying on cheap Russian gas, and a spike in power prices. Already, the price of power in Germany is 0.7 euros per kwh (Rs 56 per unit), and this will go up.

Europe has worse problems than high food and energy prices, and rising unemployment. It is on the verge of electing a fascist party to power in Italy, which, along with France and Germany, is core to European Union cohesion, and coherence. The Brothers of Italy, in alliance with the Northern League and Berlusconi’s Forza Italia, is poised to emerge the largest party in the elections that have been necessitated by the fall of Mario Draghi’s government. The Brothers of Italy is described as the spiritual inheritor of the Mussolini legacy.

Further loss of moral authority stems from Europe, long used to haranguing the rest of the world for effective climate action, stooping to burn coal and lignite to ward off power shortages, at a time when Climate Change makes itself tellingly felt as drought, heat waves, and forest fires across Europe and other parts of the world. The Congo is gleefully awarding new hydrocarbon exploration licences in its virgin forest land, without a peep of protest from Europe, which is scrounging for any available shipment of liquefied natural gas or other hydrocarbons across the globe, to make up for the shortfall of gas from Russia.

Europe is being forced to stare at the dark underbelly of the energy reality even as that regular climate offender, the US, is putting in place a meaningful climate action plan, with funding to the tune of hundreds of billions of dollars for everything from electric cars, energy-saving buildings, and renewable energy co-operatives for low-income communities to new, small modular nuclear reactors.

Europe will import coal and natural gas from the US. It will also buy hundreds of billions dollars-worth of weapons from the US, as European governments seek to raise their arms budget to 2 percent of GDP, the NATO target.

In return, the US will offer them a putatively weakened Russia, with a gargantuan reconstruction bill building up in Ukraine, all ready to be picked up by Europe. Should we then be surprised, if the forthcoming meeting of the G20 in Indonesia sees a degree of European enthusiasm for proposals from India, China, South Africa, and Indonesia to find ways to end the Ukraine war, well before someone sets out to explore what the world looks like one year into the war?

This article was first published in Moneycontrol as The world six months into the war in Ukraine on August 24, 2022.