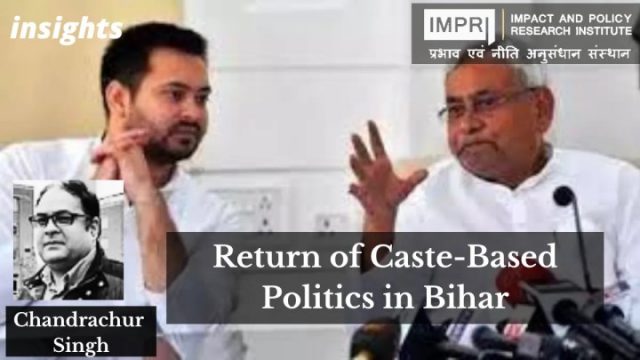 In the landscape of India’s federal politics, the state of Bihar is an outlier of sorts. One of the most politically conscious states, Bihar is also the least developed on the parameters of the human development index.

The process of social churning that began in the 1970s and was perceived to have stabilized with the rise of OBC patriarchs Lalu Yadav and Nitish Kumar seems far from over. Instead, with the BJP becoming a potent force in the electoral arena in the state, the process is now paving way for yet another tectonic shift in its already vexed caste-based political constructions. The formation of yet another Mahagathbandhan (the grand alliance) under Nitish Kumar’s leadership only further confirms that Bihar’s political pathways continue to be both capricious and enigmatic.

Immediately after setting in the formalities of this newest alliance, Deputy CM Tejashwi Yadav made an interesting comment. Justifying and condoning questions raised over the flip-flops of Nitish Kumar, Tejashwi, in an interview with journalists, said: “Hum log toh Samajwadi log hain na” (We are socialists).

Arguably, the deputy chief minister meant that coalescing of the socialist forces was natural and that the newest coalition was compact is being held together by the ideological commitment to socialism. Given the fact that caste-based mobilizations in India have often been embalmed by the rhetoric of socialism, it is clear that politics in Bihar in the days forth is least likely to offer steps towards aspirational governance or steps for resource enhancements. Rather, it is likely to adopt strategies that might once again flare up caste-based identities, triggering refiguring and reconsolidating strategies which, in turn, may aggravate the already fast deteriorating law and order situation in the state.

The fight between the BJP and the Mahagathbandhan for gaining a mathematical edge in vote share by creating new forms of caste alliances and splitting the others is clearly on. The caste composition of Nitish Kumar’s new cabinet only substantiates it.

Politics in Bihar has always been deeply drenched in caste-based identities and their violent manifestations. However, given the fact that it is also the state with the highest number of younger voters, the promises of good governance, law, and order, education, employment, etc. hold a significant magnetic force in mobilizing them.

In fact, it was only by touching this chord that Tejashwi Yadav was able to create not just a mass appeal, particularly amongst the younger voters in Bihar but in doing so could successfully emerge out of the shadows of the caste-maligned imagery of his father – Lalu Prasad Yadav.

Despite the aggressive and combined electoral campaigns of the BJP-JD(U), Tejashwi was very near to coming to power on his own. In his new-found popularity, he was seen by generation next as a dynamic force, who could propel Bihar out of its miseries. Roughly 20 months later, in affirming his faith in the same old caste-based strategies embalmed with the regressive appeal to socialism for gaining access to power, Tejashwi seems to have surrendered to the fait-accompli.

Nitish Kumar’s return to the Mahagathbandhan is clearly understandable. Kumar has been in power since 2005, by creating a bouquet of castes comprising of not just his fellow Kurmis but also the other non-Yadav OBCs (EBCs) and Mahadalits and a sizeable support base amongst the dominant upper castes and minorities.

The bouquet of castes was purposefully carved to create not just an exclusive support base but also to project an image of a leader who, in being inclusive and empowering, was flexible in approach, free of corrupting influences, leading a modest lifestyle, and most importantly, having no familial baggage to carry. Peppered by the promises of good governance Nitish Kumar offered a ‘Caste Plus’ agenda of governance and to be fair, it did resonate well with the voters.

However, with the BJP expanding its footprint in the state, the flowers in Nitish Kumar’s bouquet started falling apart. For many years now, the BJP has been eyeing the chief minister’s position in Bihar. Knowing pretty well the sharpness and unpredictability of Nitish Kumar and despite doing much better in the assembly elections in 2020, it accepted the position of a junior partner for itself.

This was deliberate because while sharing power would, on the one hand, allow it to energize the party cadres, on the other hand, it would also allow it to deepen and broaden its support base amongst the castes in Nitish Kumar’s bouquet. It was precisely why it opted to forgo its claim to the chief minister’s position in 2020, settling in instead for two deputy chief ministers belonging to the dominant non-Yadav OBC and EBC castes respectively.

The strategy was clear — create a new caste-based bouquet comprising the upper caste, the non-Yadav dominant OBC groups, the Dalits — particularly Mahadalits — (Paswans, Ravidasias), and a section of the minorities (Pasmanda Muslims) and plank it on the ideas of nationalism developmentalism and the ever-enhancing popularity of Modi. This was the agenda of ‘Caste Double Plus’ or Caste Plus Plus, which had everything that Nitish Kumar could offer, but also more.

The mere fact that despite having similar hence competing support bases, no formal or informal channels of coordination were created, implies that both the JD(U) and the BJP knew that their dalliances weren’t intended to last for long. Either way, Nitish Kumar’s proposition of ‘Sushashan’ had been gradually losing its sheen in the wake of PM Modi’s grander calls for developmentalism and corruption-free India. And so, when the moment of reckoning came, it was only natural for Nitish Kumar to turn back and shed his good governance agenda in favor of returning to the tried and tested route of holding power by basing it on caste identities.

Having failed in creating an acceptable second-line leadership in the party, this was perhaps the best option for him as it certainly enhances his political longevity.

The BJP may have lost power but it certainly sets them up to clear the last hurdle. It is well understood that of all the parties, the BJP does oppositional politics the best. Having created inroads amongst castes, it would certainly apply the UP model following an aggressive and agitational path to power in the days ahead.

It is well understood that the yearning for acquiring, preserving, and perpetuating power brings the strangest of partners together or can even precipitate splits between the most compatible ones. Cases of coalition partners switching or swapping sides mid-way, pre or post-elections are also not new. Coalition formations, both at the national and regional levels in India, are replete with such examples of friends becoming foes and vice-versa.

What is, however, saddening in the case of Bihar is the fact that just when it appeared that Tejashwi Yadav would be able to ride over the primordial loyalties in ushering in a new era of governance that would be sensitive to the aspirations of the youth and set the path for Bihar’s integration in the market systems, at least for the time being, it seems to have been taken over by the age-old caste-based bids to power, albeit once again in conceit to socialism.

This article was first published in News 18 as ‘Sushasan’ the Casualty as Nitish-Tejashwi Alliance Marks Return of Tried & Tested Caste-Based Politics on August 20, 2022.