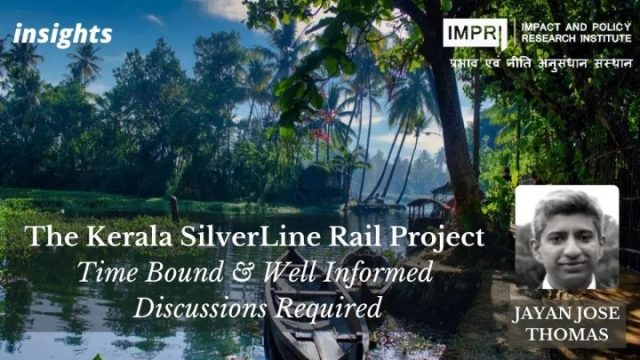 The debate around the SilverLine, the proposed semi high-speed railway in Kerala, has reached a blind alley. If the project, funded partly by the State government, comes through, the 530-kilometer distance between Kerala’s capital Thiruvananthapuram and its northern-most district Kasaragod could be covered in less than four hours. This journey takes at least 12 hours now.

But many critics of the new railway question the very idea of high-speed travel in Kerala, arguing that there would not be enough riders. The State government, for its part, is yet to convince the people that the railway line can be a catalyst for a progressive transformation of Kerala’s economy.

It may be useful for Kerala to go over the experience of Japan in building the world’s first-ever high-speed rail line, called the Shinkansen. In the 1950s, there were serious doubts about its viability, in a country that had been devastated by the Second World War. However, ever since its inauguration in 1964, Shinkansen has been a powerful agent and a symbol of Japan’s economic resurgence.

By the 1980s, Kerala had achieved most of the preconditions required for an economic take-off. Its record in public health and education then (as they continue to be now) was not only the best in the country but comparable to that of the East Asian tiger economies.

However, the economic opportunity slipped away for Kerala, which received a relatively low share of public sector investments in infrastructure, and research and academic institutions. Over the decades, Kerala has been a large exporter of skills.

Estimates suggest that between one and one-and-a-half million people from Kerala are employed in high-skilled jobs — as nurses, engineers, teachers, media professionals, and so on — outside the State, most of them outside the country.

There is now a growing realization that new economic activities have to be nurtured within Kerala, drawing on the talents of its educated job seekers. In colleges and universities across the State, 1,66,000 enroll for tertiary education every year, which includes 60,000 who join engineering courses.

The Kerala State Planning Board has outlined the possibilities for knowledge-led economic growth. In addition to tourism and information technology, the sectors in which Kerala sees potential include healthcare, life sciences, biotechnology, media and animation, space and aeronautical technologies, and artificial intelligence.

In the post-pandemic world, as companies seek greener and less congested spaces, Kerala offers a unique advantage. Modern economic activities can thrive across the length and breadth of the State, given its dispersed nature of spatial development.

Building an effective public transport system is central to realizing Kerala’s economic ambitions. The proposed semi high-speed railway, which will cover 11 of Kerala’s 14 districts, assumes importance in this context.

The SilverLine could serve the function of a fast-paced suburban rail system for the whole of Kerala, with each of its stops becoming nodes for future economic growth.

This could be similar to the way the local trains have uplifted the economy of the Greater Mumbai region or to the long-run impacts made by the London Underground railway. The northern districts of Kerala will benefit in particular.

In fact, the need to have frequent stops (at an interval of roughly 50 km) partly explains why Kerala has opted for a semi high-speed, and not a high-speed, railway line.

The maximum speed that can be attained on the semi high-speed line being planned in Kerala will be 200 km per hour, while trains can run at a speed of 320 kmph on a high-speed line.

The State government has to drive home the point that the SilverLine is not a vanity project, but part of a long-term effort to modernize the economy and create new jobs in Kerala. Many of the criticisms against the rail network will simply wither away when the project is viewed as a part of tomorrow’s, and not today’s, Kerala, catering to the needs of a much bigger economy.

There are concerns that the rail project may damage the environment in the short run, especially during the construction stage. But in the long run, there are no doubts that a public transport system such as the SilverLine, run on renewable energy and capable of carrying more than a million passengers a day, will help reduce pollution and carbon emissions.

It is also clear that a land-scarce Kerala cannot afford to depend on the road network for its future transport needs. The number of motor vehicles on the State’s roads has doubled over the last decade. There were 14.4 million vehicles in Kerala in 2020, which included 3.2 million cars and jeeps, all for a population of 35 million. The number of accidents involving motor vehicles has been rising steeply. Compared to a six-lane national highway, the proposed semi high-speed railway will require only half the amount of land but can carry three times the traffic (according to a note circulated by the Kerala Rail Development Corporation).

The rail project, which will take five years to complete, is expected to cost ₹63,941 crore, or roughly 7.5% of Kerala’s annual income. But the argument that the railway construction will push Kerala into a debt burden is not correct. It arises from an assumption that the economy will remain where it is today. As Kerala’s economy enlarges with the stimulus given by the new rail line, the debt will be within manageable limits. The fears that the construction of the semi high-speed rail will cause natural calamities may be unfounded. Even as it crisscrosses an earthquake-prone terrain, the Japanese high-speed rail network has seen no fatal accidents in over the last six decades.

The public debate covering the financial and technical aspects of the SilverLine project must continue. It must address questions such as whether the new railway should run on the standard gauge or broad gauge, and whether the modernization of the existing railway network will turn out to be a more cost-effective option than the building of a new rail line. The concerns regarding environmental impacts and compensation to those who lose their land for the project must be looked into. The planning for the railway should not be done in isolation, but go hand in hand with the measures to reinvigorate the industrial, technology, and tourism sectors in the State.

All of these must be done in a forward-looking and time-bound manner. Needless to say, the discussions should be well informed, based not on hearsay but on scientific and technical inputs. At the same time, the voices that reject outright the plans for a modern rail network in Kerala must realize that they are doing a grave injustice to the State’s future.

Read another piece by the author on Unemployment, Imperative to Tackle Unemployment Crisis in 2022