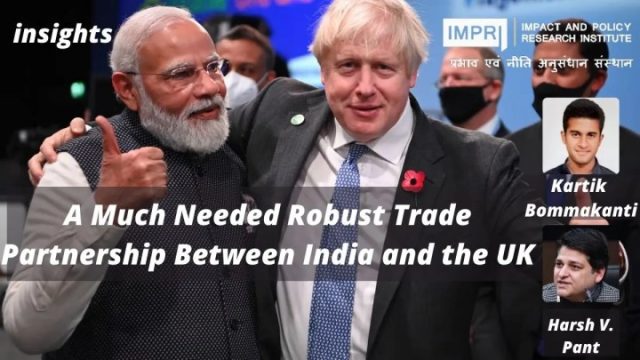 India and the UK have a history of commitment to further educational ties as India is one of the biggest contributors to the British Higher Education system. As of 2019-2020, there are over 53,000 Indians enlisted in the UK educational institutions.

India and the United Kingdom are redefining the contours of their bilateral engagement in the twenty-first century. In January 2022, India and the UK officially launched negotiations for a free trade agreement (FTA) aiming to conclude by the end of this year. The primary aim is to double the existing bilateral trade between India and the UK by 2030.

Earlier in May 2021, British Prime Minister Boris Johnson and Prime Minister Narendra Modi launched a 2030 Roadmap that will serve as an operational framework for the UK-India relations across multiple domains such as health, education, trade, climate, science and technology, and defense.

Under the purview of the 2030 Roadmap, a Joint Working Group on Trade was formed to better understand the ambitions and interests of each other before successfully agreeing for an FTA.

Additionally, India is a key strategic ally for the UK in the Indo-Pacific both in terms of market share and defense collaboration. For the UK, a successful conclusion of an FTA with India would bolster its idea of Global Britain at the heart of the Indo-Pacific. But one of the relatively unacknowledged sectors with high potential within the broader India-UK relations remains education.

India and the UK have a history of commitment to further educational ties as India is one of the biggest contributors to the British Higher Education system. As of 2019-2020, there are over 53,000 Indians enlisted in the UK educational institutions.

The National Education Policy (NEP) of India has proposed major reforms to address the current lacunae in India’s human capital challenges primarily to improve the quality of domestic higher education institutions and widen India’s footprint as a global education hub.

However, the NEP in its nascency is yet to fully implement its goals but the current domestic constraints in India’s educational architecture are one of the primary reasons for outbound student mobility which also explains why India is the second-largest country with a mobile student population amassing over 1.5 million Indian students studying in more than 85 countries.

This is highly disproportionate to the number of foreign students studying in India, which is around 49,000, and for India to be a global education hub, it would require to bolster and overhaul its Higher Education Institutions to enlist its education infrastructure as a central component of India’s soft power.

The 2030 Roadmap along with NEP promotes digital education and creates international collaboration by advancing currently existing initiatives such as the UK-India Education and Research Initiative (UKIERI).

Jo Johnson, former Minister of State for Universities, Science, Research, and Innovation, has been a strong votary of the UK deploying its knowledge assets in a strategic manner with India to establish a comprehensive knowledge partnership which could be the centerpiece of India-UK FTA.

India hosts the world’s largest youth population under the age of 25 representing over 600 million and this demographic dividend has the potential to be the backbone of India’s economic growth in the coming decades.

The report also highlights decreasing Chinese dependency by aiming to double the number of Indian students studying in the UK by 2024-2025. The primary reason for this is the structural breakdown of the relationship between the UK and China which could have major spillover effects on international education and collaborative research.

In the case of India-UK, such a breakdown seems “almost inconceivable.” The UK aims to support India by becoming its first-rank knowledge partner to help in the fulfillment of its potential and achieve its major objectives under NEP.

The report further identifies five building blocks for India and the UK to enable the comprehensive knowledge partnership. It suggests signing an India-UK mutual recognition of credits and qualification treaty; using Turing (an initiative launched by the UK government which is a global program to study and work abroad) to support a more balanced partnership in international education;

doubling the number of Indian students by 2030 by moving India to the low-risk country list and eventually implement visa liberalization of a post-study work visa; provide funding to Indian students to assure quality and sustainability; and, support collaboration in R&D that promotes frontier science.

International education has become one of the most significant export industries in the 21st century and if higher education was to be accounted as exports, the UK’s exports at £7.8 billion would have been its single largest export to India. Hence, India is a key priority country under the UK’s International Education Strategy, and with Transnational Education (TNE) slowly gaining relevance in India, it allows the UK an opportunity to widen its global footprint in India and widen the scope of Global Britain.

Rightful enablement of India’s youthful demographic prowess would significantly contribute towards its economic growth in this century as India’s research base is gradually expanding but is yet to realize its potential.

Under the aegis of 2030 Roadmap, a UK-India Young Leaders Entrepreneurship Forum was established to facilitate a platform for young leaders to collaborate in various sectors.

India-UK relations over the years have blossomed as India has moved from 22nd to 16th place in UK’s preferred partners in less than 10 years. A knowledge partnership would prove beneficial for both as not only will it help promote tertiary education in India but will also allow the UK to further its ambitions as part of Global Britain.

An India-UK knowledge partnership is a natural corollary to the growing ambition in London and New Delhi about the state of bilateral ties. The two nations have waited long enough but the present geopolitical environment makes such a possibility a highly realistic aspiration. It is time to seize the moment.

This article was first published in the Sunday Gardian live as Needed, a robust knowledge partnership between India and UK on 5th March 2022

Rahul Kamath is Research Assistant with ORF’s Strategic Studies Programme. His interests include Europe and the European Union with a focus on Central and Eastern European affairs