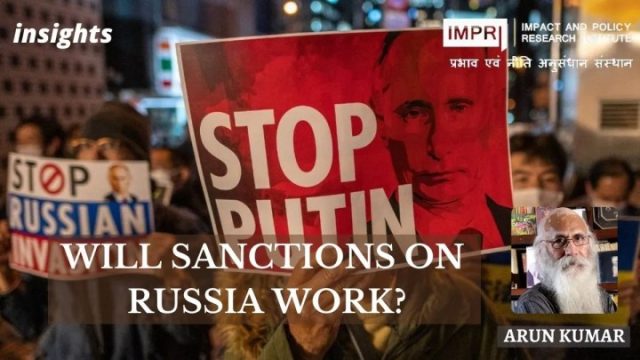 Western sanctions against Russia will cause some disruptions in the Russian economy, but won’t hurt it too much. In the medium-to-long term, they are likely to enhance the relationships between Russia and China

THE rich nations supporting Ukraine in its war with Russia have imposed sanctions on the latter. They cannot intervene militarily directly since that would lead to a much wider conflagration and a possible catastrophic Third World War, as the Russian Foreign Minister has warned.

The North Atlantic Treaty Organization realizes that and has not sent its troops to Ukraine, in spite of pleadings by the Ukrainian government. Instead, it is providing arms and other support to Ukraine to resist the invasion. The situation remains dangerous and tricky.

Sanctions are supposed to punish the Russians for their aggression. It won’t halt the war but will it hurt the Russians enough that they will regret the invasion and not embark on future adventures? If the war drags on the costs could mount.

This could lead to pressures for a regime change in Moscow and that may lead to a ratcheting up of the war. If sanctions are successful, will it be a lesson to China? Severe sanctions against Iran (0.3 percent of the World’s Gross Domestic Product [GDP]) did not bring it to its knees.

Given that the Russian economy is bigger (1.7 percent of the World’s GDP) and much more advanced technologically, its economy may be much less impacted.

Sanctions primarily convert a relatively open economy into a relatively closed economy. No economy is completely closed or open, so it is a question of relative degree. The impact will then depend on a) how open the economy was before the sanctions and how closed it becomes after their imposition, b)

Russia is a major exporter of oil and gas, especially to Europe. This would be disruptive so these items are not sanctioned. But, this exception will blunt the sanctions since this is a major source of foreign exchange earnings for the Russian Federation. Russia also exports other commodities needed by the world. and their trade is also unlikely to be disrupted for long.

Export of these commodities by Russia is likely to continue as long as a) alternative sources are not found, and b) as long as payments for them are not blocked by the importers. If payments are frozen, Russia would stop exporting them and that would disrupt the world economy. Given the uncertainty,

the prices of these commodities have already risen and boosted Russia’s export earnings. Alternative sources for these commodities may be found but that will be more expensive so that the rate of inflation globally will increase. Russia can also export oil and gas to China, which is a big importer of energy and has been planning to import more from Siberia.

Russia’s imports are also sanctioned. This will cause prices of imported items to rise in Russia and inflation will kick up. Russia can reorient its economy to produce some of these goods, though they may not be as sophisticated or as cheap as the imported items.

Anyway, imports will also decline along with the exports, and the trade surplus will continue. Russia’s major imports are machinery, pharmaceuticals, electronics, vehicles, and plastics. If China does not join the sanctions as seems likely, it can provide many of these items.

India is also unlikely to join the sanctions given its huge dependence on Russian imports of defense equipment and spare parts. India and China would need an alternative mechanism of payment since SWIFT [Society for Worldwide Interbank Financial Telecommunications] may not be available.

China already has an alternative called CIPS [Cross-Border Interbank Payment System] and Russia has SPFS [Sistema peredachi finansovykh soobscheniy, literally ‘System for Transfer of Financial Messages’]. Smaller Indian banks with little exposure to foreign trade could become members of the SPFS to enable India to carry on trade with Russia.

Will financial sector sanctions hurt while the trade sanctions may not? They consist of a) shutting out many Russian banks from SWIFT, b) Western companies pulling out their investments in Russian companies, and c) freezing the assets of the Russian Central Bank, Russian oligarchs, and the Russian leadership.

These have created a negative sentiment about Russia both within the country and abroad. Share prices and the value of rubles have declined steeply. Long queues have begun forming in Russia at banks and ATMs to withdraw money. The Russian Central Bank raised interest rates sharply from 9.5% to 20% to lure people to keep their money in the banks.

The freezing of the Russian Central bank accounts by the rich countries would also not matter if capital is not allowed to leave Russia. These deposits would not be needed to pay those wanting to withdraw from its economy. … The freezing of Central Bank assets abroad will also not matter if the public is not allowed to draw foreign exchange (for precautionary purpose) from banks. Foreign debit and credit cards will stop functioning and would have to be replaced by the Russian bank cards.

Multinational corporations [MNCs] like the British oil and gas companies BP and Shell have announced that they will sell their stakes in the Russian firms. American financial services corporations Mastercard and Visa have announced that they are blocking certain Russian activity from their payment networks. Global Accounting network KPMG is cutting ties with certain Russian clients. To prevent capital from going out, Russians closed their stock markets. So, MNCs wanting to sell their stake in the Russian companies cannot do so in Russia and no one will buy these stocks in foreign stock markets. Thus, foreign capital invested in Russia cannot withdraw.

As argued above, the surplus in trade will persist, since oil and gas are not yet sanctioned, and foreign exchange will continue to flow in. If Russia does not allow conversion of the ruble to foreign exchange within the economy, the demand for the dollar will remain low and its value will not fall further.

The freezing of the Russian Central bank accounts by the rich countries would also not matter if capital is not allowed to leave Russia. These deposits would not be needed to pay those wanting to withdraw from its economy. Similarly, freezing the accounts of kleptocrats and Russian leaders who have accounts abroad would be a personal hit for those targeted, but not for the economy. That money was not available for the Russian economy anyway. It would only be a lesson for the Russian rich that they should not indulge in corruption and hold their funds abroad.

Russians rushing to the banks to withdraw their funds is likely to be temporary, as long as sufficient liquidity is provided by the Central Bank. The freezing of Central Bank assets abroad will also not matter if the public is not allowed to draw foreign exchange (for precautionary purposes) from banks. Foreign debit and credit cards will stop functioning and would have to be replaced by Russian bank cards.

Certainly, the financial sanctions would cause disruption in the short run which can be minimized with restrictions on capital flows and due to the continuing trade account surpluses.

What of the medium and long run?

Given that the economy will become relatively closed, foreign transactions will decline in importance, and their impact on the real economy will be correspondingly less. Given the global disruption and uncertainty, the Ruble will decline in value in the short run, which will lead to higher inflation. The shortage of imported goods and their substitution by imports from others or by home-produced goods and services will also be inflationary.

Russia’s rate of investment has been between 26 and 33 percent of its GDP in recent years. This is likely to decline due to the requirements of the war effort, and the growth rate will decline. How much would the decline be would depend on how much the Russians support the government?

Will these short-run disruptions in growth, investment, and inflation persist in the medium run? If major exports like petroleum and gas remain unsanctioned, trade with China and India continues and the economy adjusts to producing the currently imported goods, the Russian economy will recover. If Russia revamps its production and increases its investment with some belt-tightening, growth could be robust. Denial of technology will certainly hurt in the medium term but Russia is advanced enough to develop the technology.

In the long run, how Russia copes with the sanctions would crucially depend on its relationship with China. The two have been drawing closer since the US had viewed China as the main future adversary and sought to encircle it. This is not going to alter given China’s rapid advances in the last four decades. Also, after sanctions against Russia, China would worry about future sanctions against it. This would be tested rather soon as China continues to trade with Russia disregarding the sanctions. Given these scenarios, China would most likely come to the aid of Russia. A bloc with Russia would also give it greater depth, access to raw materials, and access to Russian technology.

The world is headed towards the emergence of two blocs – that of the rich countries and the bloc of China and Russia. The trust between the two blocs has been eroded and is unlikely to be restored any time soon. This situation is likely to persist even if the war ends soon and sanctions are withdrawn thereafter.

The world could see the emergence of two circles of trade, technology development, and capital and financial flows. It will make life difficult for India but most developing countries could benefit from the attention that they would get from the two blocs competing for their support.

If major exports like, petroleum and gas remain unsanctioned, trade with China and India continues and the economy adjusts to producing the currently imported goods, the Russian economy will recover. If Russia revamps its production and increases its investment with some belt tightening, growth could be robust.

It is imperative that a quick resolution to the grave situation is found and hostilities brought to an end. If in the coming weeks the war persists and the Russian economy hurts, Russia may adopt a more aggressive stance; that would put greater pressure on the rich nations to be more proactive. If the sanctions don’t bite, then to there would be pressure to do more. Either way, the situation could spin out of control. In sum, war and sanctions are leading to a negative-sum game and must be ended soon for the sake of the world.

This article was first Published In the Leaflet as Sanctions on Russia: how will they play out? on 3rd March 2022

Prof. Arun Kumar is Malcolm Adiseshiah Chair Professor, Institute of Social Sciences, and the author of `Indian Economy’s Greatest Crisis: Impact of the Coronavirus and the Road Ahead’. The views expressed are personal