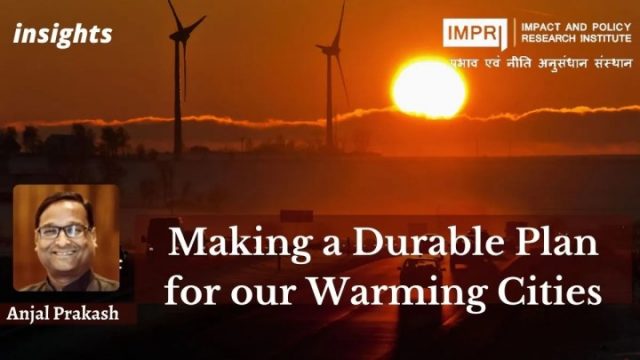 The three major climate change hotspots are the semi-arid and arid regions, the Himalayan ecosystem, and coastal zones. About half of India’s landmass is arid and semi-arid, prone to impacts of rising temperatures. The sea-level extremes that previously occurred once in 100 years could happen more frequently.

India has 7,500 km of coastline, which is home to 33 crore people living within 150 km from the coast, including many essential megacities. One of the most sensitive to climate change, the Himalayan region, is home to five crore people covering 13 states and union territories. The report indicates that the Indian population is one of the most vulnerable and exposed to severe climate-induced risks and disasters.

Roughly a quarter of Indians now live in urban areas. In the next 15 years, this figure is expected to reach 40 percent, covering 60 crore Indians, adding double the population of people living in present-day America. Cities in India will experience more heat stress, urban floods, and other climate-induced hazards such as cyclones. The report mentions, with high confidence, that urbanization processes have generated vulnerability and exposure combined with climate change hazards. This has driven the urban risk and impacts.

The report has predicted that life-threatening climatic conditions will arise from extreme heat and humidity. A disproportionate level of exposure exists in regions subjected to year-round warm temperatures and higher humidity. The primary driver of increased heat exposure is the combination of global warming and population growth in already-warm cities in India.

The urban heat island also elevates temperatures within cities, which will be amplified during the heatwaves. Older adults, people with comorbidities, and dwellers living without much access to hygienic environments will be at a much higher risk in urban areas. A higher urban population also implies heat-induced labor productivity loss, resulting in economic impacts. The current adaptation measures largely focus on knee-jerk solutions and disaster management which has to move towards long-term planning for resilient cities.

Flood risks in settlements arise from hydrometeorological events interacting with the urban system, which exposes settlements to various types of floods. Sea level rise and increases in tropical cyclone storm surge and rainfall variability leading to a rise in the intensity of rainfall will lead to larger probabilities of cities getting flooded. The report predicts that there is evidence that changes in high-intensity short duration (sub-daily) rainfall in urban areas will increase.

Places like Mumbai, Chennai, Kolkata, Visakhapatnam, Goa, the Andaman and Nicobar Islands, and smaller coastal towns and villages are at a greater risk of being flooded. The current adaptation measures to manage flooding impacts such as stormwater management, green infrastructure, and sustainable urban drainage systems must be overhauled to prepare for such flooding in the future.

One of the significant challenges of urbanization in the Himalayas is sprawling small towns with populations under a lakh. Due to the high growth rate, these towns are expected to become major urban centers in the next 10 -20 years.

The unplanned urbanization is causing significant changes in land use and land cover, with reduced recharge areas of springs. Climate-induced changes in the physical environment include increased rainfall variability. Due to this, heavy rains are becoming frequent and are leading to more landslides.

Global warming has increased the average temperature in the Himalayas, which has caused glacier melt and subsequent change in hydrological regimes of the region. One of the contributing factors of glacial decline is the deposition of black carbon, which is contributed by stubble burning, brick kilns, polluting industries.

Most towns in the Himalayan region meet their water needs using supplies from springs, ponds, and lakes that are essentially interlinked systems. Water insecurity in hill towns is becoming the order of the day. India needs to re-adopt its traditional adaptation solutions Not everything is bleak for the climate change future in India. Better adaptation policies could lead to a safer and more sustainable future.

Some examples from Indian cities cited in the report have shown that the economic benefits of adaptation are a strategy for local institutions to support adaptation action. Local governments in Surat, Indore, and Bhubaneswar linked transformation to local development needs in experiments that facilitated accessing human and finance resources at different levels. Surat also stands out as a case where city-level political leadership has supported adaptation action beyond national policy.

Passive cooling technology, a widely-used strategy to create naturally ventilated buildings, can be a vital alternative to address the urban heat island for residential and commercial buildings. The report cites ancient Indian building designs that have used this technology, which could be adapted to modern facilities in the context of global warming.

For making urban India water-secure, the report cites the example of Bengaluru, where Indian communities have traditionally managed a network of water tanks of immense ecological importance.

However, urban development has increasingly threatened this blue network in the last half-century. Today’s Bengaluru depends on long-distance water transfers that create political conflict and a dense network of private boreholes, depleting the city’s water resources. The restoration of the blue network offers a more sustainable and socially just alternative for managing water resources.

In sum, adaptation in cities and other urban areas where most of the world’s population lives will depend mainly on the resilience of natural, social, and physical infrastructure. The challenge for cities in India is a trade-off between long-term planning to make cities net-zero versus short-term response to protect towns from climate-induced risks and threats.

Anjal Prakash, is the research director at Bharti Institute of Public Policy, Indian School of Business. He is an IPCC’s lead author of the chapter on cities, settlements, and key infrastructure and cross chapter paper on mountains as part of IPCC’s 6th assessment cycle.