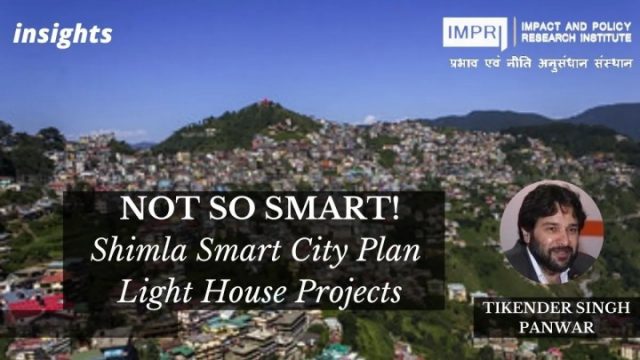 Smart city projects are a big failure, and even the government is realizing this. There was hardly any mention in the Union Budget on the once much-advertised plan.

Smart City Plan (SCP), right at the inception, is a highly exclusive form of urban development that has two problems- firstly, the model of implementation takes away the right of the elected council and instead, SPV (special purpose vehicle), which is run by bureaucrats/officials of even world bank, etc., run such SPV’s.

The BJP wanted to show this as its lighthouses for urban development. The second problem with such a proposal is, unlike the JNNURM, which was brought by the UPA where the share of investment between the central government and the state government/city government was 90:10, in smart cities, it is 50:50.

Most of the cities and states were unable to generate this 50%. But the major issue is that concentrated development was envisioned to showcase rapid development, which too did not occur. Evident from the data across India, not even 50% of the projects have been completed, though the mission is nearing its completion.

Most of the SCP’s were for redevelopment and not even 1% greenfield projects, perhaps due to land and the long gestation period. Pan city development comprised not more than 10 % of the total plan and was mainly for the internet of things- smart bus stops, smart buses, mobility, smart metering, etc.

In the ongoing session of the Vidhan Sabha in Himachal Pradesh, the urban development minister spoke on the two smart cities, particularly on Shimla, and belied many of the facts.

The opposition, Congress, and lone CPI(M) MLA ridiculed the government for turning the proposals of Shimla Smart City Plan into menial works benefiting the cronies of the ruling establishment.

Akin to other cities and towns, Shimla also focussed on redevelopment as the central strategy for investment. But here, unlike other cities, a massive drive was carried out to understand the people’s priorities.

And what was thought it would be water(because it was the period when the town had the outbreak of hepatitis) as priority number one; the people voted, instead, for mobility as number one priority. And that is how the design of the plan for Shimla was built in that manner.

Now what was Shimla SCP? Here are the basic points: Shimla Smart City Proposal was prepared based upon the priorities identified by direct engagement with 1,01,561 (57%) citizens of the city utilizing individual Feedback forms, SMS reply, Facebook, MyGov online engagement, and Ward Sabha meetings.

The following table shows how the total finances were worked out:

As evident from the table, the total budget of Rs 2,905 crore, nearly 87%, was meant for ABD and only 6.7% for pan-city proposals. And even in the ABD, redevelopment and retrofitting proposals were supposed to share almost equally.

Now, where was this money to be spent? Let’s have a look:

If Instead of widening the main cart road providing contracts to the ruling party’s petty contractors, there should have been more pedestrianisation-oriented infrastructure because that’s what the Shimla town has been boasting about. But instead, the government spent money elsewhere. (The table shows work, cost, time period, and the executing agency)

And where are the smart bust stops?

It’s been over 60 months now, and the work should have been done in 36 months. The reality is that not a single new elevator and escalator has been added in the last five years.

Major investment in mobility was supposed to be in the construction of tunnels.

Of all the above projects, none have even reached a preliminary stage. This was supposed to be a massive investment that should have helped the town ease traffic woes.

The redevelopment was another major area of city development, and here is the list of projects that were supposed to be completed within a given period.

It is shocking to note that nothing has happened on all the items listed above, except for the draft proposal of the Shimla master plan, which is out of sync with the mountain requirements. No wonder the Shimla master plan was prepared by an Ahmedabad-based consultant with a copy-paste model of the plains.

Meanwhile, the figures and the scope are illustrative that nearly nothing has happened in the city development aspect. Even if the area to redevelop- from Mall to Cart Road was struck aside by NGT, a new site should have been identified, and work started.

Likewise, for purchasing hardware for the CCTVs in the town, a sum of Rs 163 crore was kept. No progress at all, even on this front.

Why is it that the triple engine government (MC, state government, and unions government- all led by BJP) has not reached even a bare minimum of what was supposed to be developed as infrastructure and software? The major reasons are:

With the change of government and BJP taking over in December 2017, there was not an adequate supply/release of funds, which is called a matching grant; and only then one is able to get funds from the center. Secondly, the capacity of the Shimla municipal corporation to generate its funds also got diminished, and there was hardly any ‘capital generation’ taking place.

To understand this, when the CPI(M) led municipal corporation left in June 2017, the municipality was Rs 50 crore revenue surplus budget. And now the municipality cannot bear the costs of salaries and pensions, what to talk about advancing development. The BJP state government did not provide adequate funds to the Shimla municipality to bear the load of basic services.

Thirdly, not all but many elected councilors are more proxy contractors, and the BJP is drenched in this nexus. Their interest instead of city development is more to ensure works that benefit them as quid pro quo.

Fourthly, the whole question of who is running the town? It’s not the SMC council; it’s the urban development minister (as he happens to be the MLA from Shimla urban) who plays a pivotal role and ensures that his cronies are benefited.

Fifthly, the minister and the council never owned this city; hence there was no major concern for the city’s development. The BJP councilors and the minister are more concerned about who gets the major chunk of contracts. For example, some of the major projects in the pipeline,

the two tunnels from Lift to Chotta Shimla and another to Lakkar Bazar, required just some active engagement. Neither the council nor the minister was able to push for it.

does this mean the dead-end for smart city projects? The same that were supposed to be lighthouses of urban development or the new paradigm will be another disaster in offering a glimpse of what we can see in the redevelopment works in Kashi and the Central Vista?

Tikender Singh Panwar is the former deputy mayor of Shimla and is currently a senior visiting fellow at the IMPRI Impact and Policy Research Institute and an advisor to the Samruddha Bharat Foundation.