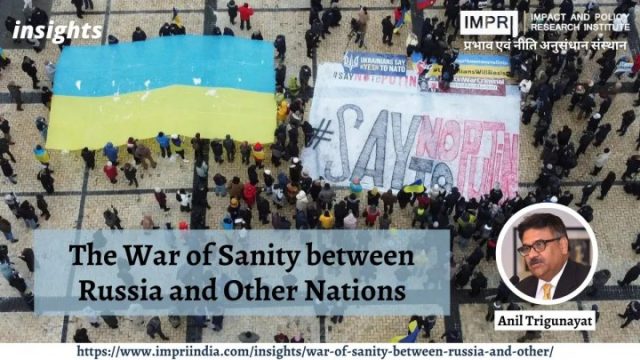 The Russian blitzkrieg does not seem to have worked. It wanted to have a quick victory but the popular resistance sui generis and also supported and allegedly fomented for years by western countries could make the winning sour and delayed.

President Putin chose to teach a lesson to his pro-western Ukrainian counterpart and to convey a tough message to his US and European partners to lay off from his redlines i.e. NATO expansion to his borders. President Zelensky, a comedian turned-politician, was disgusted with the western ‘prayers and words ‘who led him to the garden path but is holding on against the Russian aggression calling people to rise against the invaders and garnering global sympathy as an underdog.

Russia wanted to avoid civilian casualties and public and international outcry even if the calculations of military superiority did not deter Ukrainians. Putin claimed that his goal was to ‘demilitarise and deNazify’ Ukraine and was to protect the Ukrainians from their ilk and sold-out leadership. He maintained that the occupation of Ukraine was not his objective. Since both have been part of the demised Soviet Union, they both can recall the perseverance of Russians against Hitler and Napoleon and have tremendous power to face adversity. No one wants a war but they love their fatherland and would want to defend it.

As Zelensky has been seeking talks and diplomatic solutions even at this stage, he has gone to the International Court of Justice against the Russian invasion. He also declared his intention to be ‘neutral’ which could alleviate immediate Russian aggression. As the international pressure and sanctions grow in the UN and elsewhere, Putin also wants to give a chance to diplomacy and negotiation to find an acceptable solution. Even though expectations are low and no immediate resolution is anticipated bilateral talks ‘on Ukraine -Belarus border are a welcome development if it can result in some ceasefire.

Since United Nations Security Council (UNSC) Resolution was supported by 11 members and piloted by the US and Albania and vetoed by Moscow did not go forward the rare emergency session of UNGA has been marshalled to focus on the crisis and condemnation. Some 80 members have signed up. China, UAE, and India had abstained urging de-escalation and that diplomacy and dialogue should take precedence while sovereignty and security concerns of all sides are addressed. We are not living in an idealistic world but sanity as proposed by India must be given a chance to avert the impending disaster.

Prime Minister Modi also spoke to President Putin and President Zelensky asking for immediate de-escalation and allowing diplomacy and dialogue to take the lead. Of course, India’s major concern remains the safety and security of its 20,000 citizens and students stuck in the war zone. ‘Operation Ganga’ has been launched and even top ministers, including Hardeep Puri, Gen VK Singh and Civil Aviation Minister Scindia, and Law Minister Rijiju have been commissioned to go and oversee the evacuation efforts as India approached leaders of neighbouring countries to facilitate their safe exit.

This is a geopolitical contestation as the current global disorder will yield space to a new power arrangement. Witnessing the failure of unilateralism of Americans and NATO in Afghanistan and Russian difficulties in Ukraine and other wars like Nagorno-Karabakh and Georgia, it is abundantly clear that brute power has its severe limitations. The ongoing crisis is the most challenging for Europe and USA, who also miserably failed in addressing Russian concerns by being innovative since that was not the objective. When Putin says that his ‘western partners’ can’t accept the largest and well-endowed country in the world governed differently or being able to withstand them, there is an element of truth. Ideology and power projection have their dynamics.

Putin in his justification to recognize the two breakaway Republics of Donbas did mention that he had broached Russia’s inclusion in NATO to President Clinton in 2000 soon after he became President. But it would have been a conflict of interest especially geo-economic as both are driven by their arms industry and enterprise for global markets and one-upmanship through the Cold War 1.0 towards the threatening Cold War 2.0. But whether Cold War 2.0 will be borne out of World War III, with nuclear weapons usage, is a possibility everyone shudders. Putin, in the meantime assessing the perceived intervention from NATO countries, just in case, has wagoned out his nuclear option.

Meanwhile, the western countries have begun to pump in arms and ammunitions and humanitarian aid into Ukraine through the land borders of the NATO countries as they start imposing severe and wide-ranging sanctions and costs on Russian banks, financial institutions, important entities, airlines, suspending space cooperation and SWIFT mechanism, etc. President Putin and Finance Minister Lavrov and many of their key figures and oligarchs’ assets are being frozen. The UK, which remained a welcoming haven for Russian tainted money, invested hugely in real estate and other entities, is stooping to saintly extortion, according to several Russians. The impact of sanctions will only be felt in time and may have been duly calculated by Putin along with the resolve of the adversaries who arguably have found a common cause to deter Russia.

These developments will lead to the emergence of new financial instruments and mechanisms and modalities of dealing with the oft-repeated western response matrix. The countries sanctioned or under threat of sanctions by the US-led Bretton Woods system will be more than happy to branch out and sparse out their risks. China is already leading the pack. The blatant Cold War 2.0 with far-reaching consequences will become a harsh reality and greater global challenges like development, poverty, climate change, de-weaponisation, and disarmament will be ignored even as the threat of the pandemic and its aftereffects stares the world community.

One can argue either way, but war is always indefensible and avoidable except when a country is being invaded. Could this war have been avoided? Yes, indeed! But the geopolitics and geo-economics of it and the superpower games did not allow it. While Moscow’s demand asking permanent denial of choice to a sovereign Ukraine to join NATO and asking for written guarantees in this regard might be extraneous, Russia’s security concerns, given the unbridled eastward expansion of the NATO war machine which should have become redundant with the disintegration of the Soviet Union and Warsaw Pact, are real with the adversarial relationship and prevailing trust deficit.

It could have been addressed during the past eight years or so through more economic than military engagement with Ukraine which would not pose a threat to Russian or Ukrainian security interests. The inclusion of Russia in the European security architecture with a genuine indivisible security perimeter could have addressed many other emerging challenges in the Indo-Pacific and other hotspots where both are pitched against the other. But then the spoiler is the geo-politics and perceptions by the deep state in both the countries which thrive on conspiracy theories and by alliance and mutually destructive syndrome. In such a scenario, targets like Ukraine, Libya, Iraq, Yemen, and Syria pay a heavy price.

Leaving aside the standard narrative, explaining India’s abstention vote at the UNSC twice predicated on her enlightened self-interest and safety of her citizens, it is the only sane and credible voice urging to give a chance to diplomacy to resolve the conflicts and differences. It underscores that “dialogue is the only answer to settling differences and disputes, however daunting that may appear at this moment. It is a matter of regret that the path of diplomacy was given up. We must return to it.” Hopefully, India will play a more proactive role in peace-making and dialogue and could even consider hosting the talks in New Delhi.

First published in Blitzindia, Ukraine crisis: Sanity must be given a chance, on March 6, 2022.