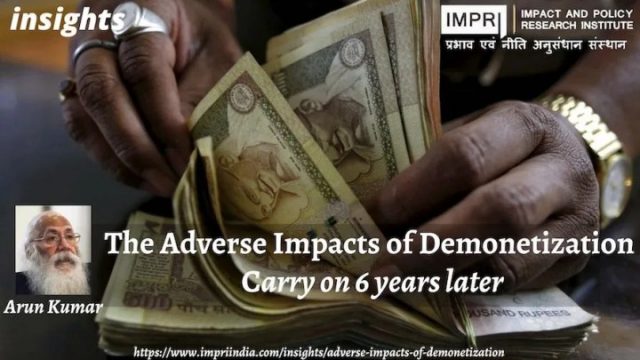 Six years back on 8 November, the country suffered a policy induced shock. The economy which was coasting along at a good clip suddenly stalled. The most severe impact was on the most vulnerable sections who can barely take care of themselves. They largely belong to the unorganized sector which employs 94% of the workers. It is cash based since its operations are too small to use banking, etc. The cash shortage persisted for at least a year and was acute for at least two months. This sector works with small amounts of working capital and that gets exhausted when operations cease.

So, it becomes difficult for them to restart once they close down for even a week. They depend on the informal markets to restart and pay high rates of interest which cuts into their meagre incomes, thereby aggravating their poverty.

Demonetization was premised on the incorrect notion that `black means cash’. If this was true, squeezing out cash from the economy would put paid to the black economy. But cash is less than 1% of the black wealth. So, even if all the black cash returned to the banks it would have meant that black wealth would hardly be dented. Further, black income generation, based on under and over invoicing of transactions would remain unaffected.

Finally, if black income generation continues, black cash would get regenerated. Anyhow, all the cash came back, so even 1% of the black wealth was not impacted. In fact, it got converted into new notes. Actually, cash in the economy has further increased as recent data shows.

The government’s introduction of the Rs.2,000 denomination currency notes was strange if it wanted less cash to be available for storing black wealth. Later it introduced Electoral Bonds which have become a means of bribing the ruling party in white. Effectively, demonetization did not curtail the black economy and it persists. The cost of this policy misstep has been high.

Shock to the Economy

No wonder, official data shows that the year of demonetization (2016-17) had the highest growth rate of the decade of the 2010. The error in the data for 2016-17 got carried forward to ensuing years. The unorganized sector has not recovered since then but the GDP data does not reflect that. In brief, the official GDP data has been erroneous.

Further, this incorrect official data shows that the economy’s rate of growth declined from 8% in Q4 of 2017-18 to 3.1% in Q4 of 2019-20. This decline in the growth of the economy actually represents the decline of the organized sector of the economy. A result of the continuing impact

of demonetization (and of GST) on demand. After all, if 94% of the workers face shortfall in employment and incomes, there is bound to be an impact on demand and economy’s growth.

This shortage in demand reflected itself in low capacity utilization in the organized sector. The RBI data shows that it has hovered at around 72%. This in turn impacts investment which had peaked in 2012-13 at about 36% of GDP and declined to around 32%. Even the massive cut in the corporate tax rate in 2019 did not spur greater investment in the economy. Companies used the extra profit to retire their debt rather than invest when demand was short.

Invisibilization of the Unorganized Sector

The government relying solely on the official statistics based on the organized sector data has been claiming a robust performance of the economy and, therefore, has not deemed it necessary to initiate special measures to tackle the crisis faced by the unorganized sector. Policies have not been revamped and the crisis continues.

No wonder, unemployment has got aggravated, especially for the youth. Even officially it reached a record high of 45 years before the pandemic. It remains high for youth in the age group of 15 to 29 years. Also, the more educated a person, more the unemployment. The participation of women in the labour force has been on the decline for some time. This loss of employment and income has resulted in aggravating poverty as fewer family members find work.

Even if one goes by the official figures, the decline in the rate of growth implies that loss of incomes is at least Rs.10 lakh crore. If the little evidence of the decline in the unorganized sector is factored in, the rate of growth of the economy is not 7% but negative. The loss of incomes for the unorganized sector would be a multiple of the above mentioned figure. So, the human cost of demonetization leading to a policy induced crisis is enormous for the vulnerable sections. The benefits given to this section through freebies and government support is only a fraction of the losses suffered by them since demonetization.

This article was also published at The Leaflet as Six years later, the adverse impact of demonetisation persists on November 8, 2022.