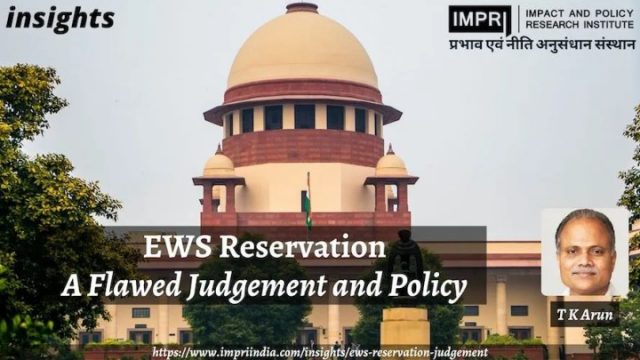 Let us take up the last point first. Two desirable qualities of a policy design for affirmative action are: one, it should not disincentivise striving for excellence; two, it should not reinforce pre-existing perceptions of inferiority. Reservations are a blunt policy instrument that lacks either of these desirable qualities. Yet, reservations work, given time across generations, as shown by the experience of Tamil Nadu, which has had reservations since the 1920s.

The gap between the qualifying scores of the reserved and general categories in Tamil Nadu is narrow and narrowing further. India’s deeply hierarchical society with historically entrenched inequalities and cultural deprivations is better off with reservations for socially and economically disprivileged groups than without them. That said, there is scope to formulate a more nuanced, more effective policy of affirmative action.

Jawaharlal Nehru University used to have an admission policy that assigned handicap points for different categories of deprivation: social, economic and regional. Anyone from a remote corner of India with poor access to educational infrastructure would get the handicap points for regional backwardness.

Nobody thought this system unfair, although some might have grumbled that merit alone should count in admissions.

That system was abused by those who could procure false income and caste certificates. Today, Aadhaar tagging makes false claims of deprivation a life-long risk to reputation. A system based on handicap points for different kinds of deprivation could be designed and implemented today with relatively more integrity than in the past.

But this is not the only or primary kind of affirmative action that ends deprivation and discrimination. Political empowerment of the disprivileged, so that the privileged cannot oppress them directly or using the resources of the state, is the first pre-requisite.

Indian tradition is hierarchical, valorises caste and oppresses women. The religious discourse calls for thorough reform to, for example, rid it of the values of the Manusmriti, which hails the Varna system, celebrates the Brahmin as the lord of all creation and declares women to be unfit for autonomy.

Instead, the discourse could uphold the notion, derived from Advaita or Non-Dualism, of the essential sameness of everyone, which makes seeming difference an illusion.

It is not just Muslims who have to shed customary beliefs and practices that are at odds with democracy; Hindus have to, too, on a much larger scale.

The ongoing consolidation of Hindutva, in contrast, indirectly reinforces the values and prejudices of undemocratic tradition, by glorifying the past, entrenching backward-looking ritual and venerating religious figures who preach the antithesis of democracy, even as it pays lip service to end caste discrimination.

A mobilised, empowered citizenry defending, asserting and expanding their democratic rights is what will realise, in practice, an end to inequality of opportunity. Affirmative action is as effective, in the absence of such a democratic movement, as cough syrup as a cure for cancer of the lungs.

There are other forms of empowerment that have little political traction. Intervention to supplement the nutrition the child receives in its most crucial formative years, from when it is in the mother’s womb to the age of three, makes a big difference. Access to clean drinking water and sanitation to prevent the ingestion of intestinal parasites should be seen as measures of social empowerment.

A new experiment pioneered in Bangladesh and being field-tested in other countries shows remarkable success in battling childhood malnutrition with food to boost the health of gut bacteria.

Mental stimulation in the earliest years of a child — being talked to, cared for, constantly challenged with new, varied bits of information, tested for understanding shapes, quantities and angles, listening to music and rhyme, and playing with toys — has a big role in developing cognitive abilities and emotional intelligence.

Children of well-off families tend to receive all this automatically from carers and grandparents, if not from busy parents, while the children of the disprivileged are deprived of nutrition for the body and nutrition for the mind, during the initial seven, critical years of their life, when children should learn to learn, and love to learn, rather than learn stuff. Remedying this would be affirmative action.

Reservations were critical in India’s early years when the resources available for education were seriously limited. Those constraints have eased considerably.

The goal now should be to train any young person to attain their potential at any level in any field of their choice — by increasing the number, quality and scope of educational institutions, by democratising access, enhancing the funds available for the purpose, as grants, scholarships, loans, private investment, public-private-partnerships and foreign investment, augmenting budgetary allocations. Simply focusing on slicing the existing pie even finer, instead of expanding the pie, is to fool the people.

Governance in the school system plays a key role in social empowerment. Absentee teachers or teachers who lack qualification or motivation or focus on private tuition, instead of doing their job should be recognised as public enemies. Political patronage of dysfunction in schools must be identified as deep elitism that stifles social mobility.

The present judgment shows no awareness of such dimensions of the problem sought to be addressed via reservations.

The dissenting judges are entirely in the right when they say that keeping the scheduled castes, scheduled tribes and other backward castes outside the ambit of reservations for the poor, although these sections constitute the bulk of the poor, violates the Constitution’s prohibition of discrimination.

But there could be one ancillary benefit — if you consider it a good thing that the government makes it clear what it thinks of the services of economists, who make poverty in India vanish in a dazzling cloud of statistical brilliance. If the government seriously believed poverty had reliably disappeared, it would not create a quota for the poor, would it?

This article was first published in the The Federal as A flawed judgment on EWS quota on November 8, 2022.