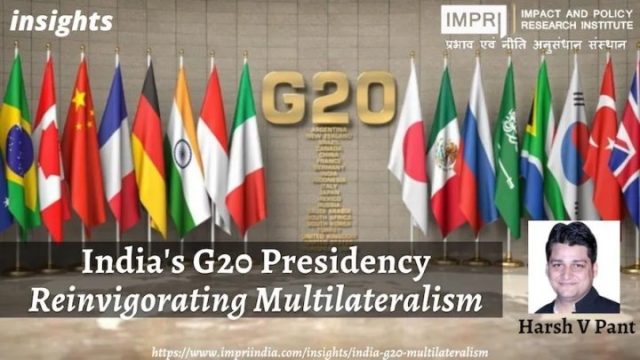 On Tuesday, Prime Minister Narendra Modi unveiled the logo, theme, and website for India’s presidency of the G20, which will commence in December this year. Taking pride of place in the logo is the lotus flower, of which the prime minister said: “[It] is a representation of hope in these times. No matter how adverse the circumstances, the lotus still blooms.” Indeed, India takes the helm of the G20 at an inflection point in contemporary history, when the word ‘adverse’ seems only apt in describing the state of the world order. “India’s G20 presidency is coming at a time of crisis and chaos in the world,” PM Modi said. “The world is going through the aftereffects of disruptive once-in-a-century pandemic, conflicts and lot of economic uncertainty.”

India is keen to play the role of a “leading power”—one that sets rules and shapes outcomes—and this Presidency could not have come at a more opportune time for showcasing India’s capabilities.

During the course of its G20 Presidency—from 1 December 2022 to 30 November 2023—India aims to hold some 200 meetings involving 32 different sectors in multiple locations across the country, highlighting India’s development journey over the last 75 years. India is keen to play the role of a “leading power”—one that sets rules and shapes outcomes—and this Presidency could not have come at a more opportune time for showcasing India’s capabilities.

The world is churning and the challenges are aplenty: the COVID-19 pandemic, the Russia-Ukraine conflict, the US-China contestations, and the withering away of the multilateral order are all fracturing the world in unprecedented ways. Many of the assumptions that have guided our engagements in the past three decades have fallen by the wayside. The post-Cold War world—nay, ‘History’ itself, as we knew it—can truly be said to be over. The world is grappling with the fundamental transformations brought in by shifting power balance, technological overreach, and institutional decay. These underlying shifts have been exacerbated by the COVID-19 pandemic and the Ukraine conflict, resulting in global inflationary pressures, food and energy crises, and widespread economic downturn. Nations are frantically scraping their coffers to provide for their citizens’ basic needs, and we are standing farther from achieving the Sustainable Development Goals (SDGs).

At a time of this global fragmentation—and when the very existence of Earth is being threatened by a massive climate crisis—the G20 is perhaps the only platform of its kind that can claim a degree of legitimacy. Although it might be too much to expect the G20 to deliver the world from its contemporary challenges, its member states are home to 67 percent of the world population, and they account for nothing less than 85 percent of global GDP and over 75 percent of global trade. Therefore it has the potential to revive our faith in effective multilateralism. And this tall task needs a kind of leadership that India today is in a singular position to provide.

The pressures of global disruption are being absorbed most by the poorer economies and few powers are willing to consider their challenges with the seriousness they deserve.

The G20 is unique in so far as it brings together the developed and the developing nations to discuss and create solutions to global governance challenges. India can effectively bridge this divide by forging consensus on key global issues. New Delhi has been vociferous in giving voice to the aspirations of the Global South, at a time when few global powers have neither the time nor resources to cater to the most vulnerable—occupied as they are with their own domestic woes. The pressures of global disruption are being absorbed most by the poorer economies and few powers are willing to consider their challenges with the seriousness they deserve. In recent years, India has taken up their concerns more forcefully at multiple global fora, be it the United Nations Security Council, World Trade Organization or World Health Organization.

For its G20 Presidency, India is poised to focus attention on the following areas: “women’s empowerment, digital public infrastructure, health, agriculture, education, culture, tourism, climate financing, circular economy, global food security, energy security, green hydrogen, disaster risk reduction and resilience, fight against economic crime and multilateral reforms.”  While the G20 was initially formed to manage global economic and financial challenges, its remit has grown and with the current conflation of geopolitics and geoeconomics, the group’s centrality to the global governance discourse is only likely to grow. New Delhi has long insisted that the world needs to “redefine” its conversations on globalisation to include social and humanitarian issues such as terrorism, climate change, and pandemics, as well as the financial and economic impediments to genuine progress and sustainable development.

India’s G20 Presidency will be aiming to move the world away from polarisation towards a greater sense of solidarity. Its own reality of being a multicultural democracy should guide it well in bringing together highly diverse stakeholders to cogitate, and act, on global challenges. The theme of G20 India 2023—Vasudhaiva Kutumbakam: One Earth, One Family, One Future—encapsulates India’s conceptualisation of the global order and its own role in it. And New Delhi has shown that it does not dwell merely on rhetoric. In 2020 as COVID-19 first surged, it insisted on the need for the international community to work together and help those struggling with the least resources, even as developed nations focused inwards, some of them hoarding enough vaccines to inoculate each adult five times over.

By hosting one of the highest-profile international gatherings ever at a time of great turbulence, New Delhi is signalling its readiness to think big and deliver big—something that much of the world had long expected from India.

Amidst this extant crisis in the global order, India can leverage the opportunities inherent in the very same challenges. By hosting one of the highest-profile international gatherings ever at a time of great turbulence, New Delhi is signalling its readiness to think big and deliver big—something that much of the world had long expected from India.

To be sure, the road ahead is a tough one. The G20 is not a panacea for the global governance deficit and the constraints are significant. But with effective leadership from India, this will be an opportunity to reinvigorate the multilateral order from the stupor it has sunk into in the past few years. India’s push for “reformed multilateralism” will gain greater credibility with its effective stewardship of the G20. India today is willing to shoulder its share of the global burden. How effective it will be in shaping the global agenda at the G20 will also depend on how willing others are in reflecting seriously on the present-day disorder. New Delhi, for its part, is pulling out all the stops and aiming high.

This article was first published in ORF India as India’s Moment: The G20 Presidency and Beyond on November 9, 2022.