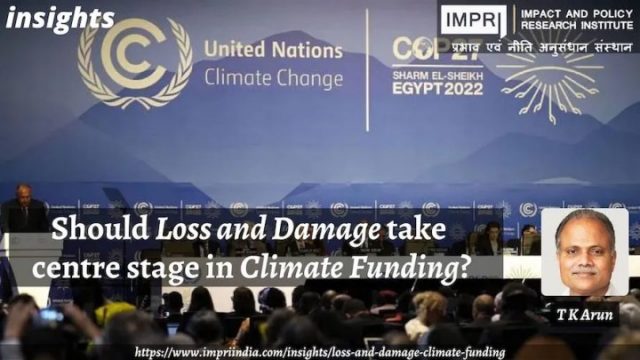 Suppose a forest fire is raging its way to your town, consuming everything in its path. You have a finite quantity of resources to dealwith it. Would you use them to clear the gap between the fire and your town of combustible material, so as to halt the fire head some distance away from the town? Or divide up the funds as part-compensation for the townspeople after the fire has burnt your town to cinder?

“Stop the fire, stupid! What else?” If that is your answer, please join me in calling on all the good people at the 27th Conference of Parties (COP27)  to the UN Framework Convention on Climate Change (UNFCCC) to lay off on ‘loss and damage’ and start demanding that the rich world redirect every penny of their climate budget on carbon dioxide (CO2) removal (CDR) from the atmosphere.

The climate disaster is not just still underway but also accelerating. The world is well on course to miss the Paris Agreement target of limiting the rise in the average global temperature to 1.5° C above pre-industrial levels. The Sixth Assessment Report (AR6) of the Intergovernmental Panel on Climate Change (IPCC) estimated that, in 2019, the atmosphere could take 500 Gt of CO2 before the cumulative greenhouse gas (GHG) emissions trapped in the atmosphere warmed the planet to 1.5° Cabove pre-industrial levels. That is just under 12 years’ worth of emissions, at the last decade’s rate of 41Gt per year.

All the ‘net-zero by 2050’ promises together cannot stop the world overshooting the 1.5° C target. It is not enough to reduce fresh emissions at a steep pace. We need net-negative emissions now in the rich world. That calls for focus on economical, innovative CDR technologies and a new CDR industry that grows from gecko to Godzilla in a decade. Impossible? Just ask Nike. Or look at the Covid-19 vaccines.

Till recently, the focus has been on capturing and storing the CO2 removed from the air deep underground. This is costly and commercially unsustainable. The trick is to find ways to make use of the captured CO2 to generate profits. Suppose chemical processes can be found to convert the captured CO2 into ethanol (and Scotch, thereon?), synthetic fuel, carbon fibre, fullerene, carbon black, diamonds or, failing that, aggregate that could stand in for increasingly scarce sand for use in making concrete, Anish Kapoor’s sprayable paint Vantablack, or something else altogether.

If CO2 can be the starting block for an entire new process for producing assorted hydrocarbons and petrochemicals, instead of digging up crude, people would mine the air for CO2.

This kind of an industry will not come up on its own. It calls for massive amounts of investment, provided or underwritten by the state — it is too risky for commercial capital. It must come from the rich world’s carbon budget.

The other part of needed climate action is nuclear energy: small modular fission reactors and greater efforts to achieve controlled nuclear fusion. The International Thermonuclear Experimental Reactor (ITER) being built in southern France just received its giant magnet from Russia, despite the hostilities over the Ukraine war. India must redouble its efforts on the thorium-based fast breeder reactor programme. All this also needs focused use of funds.

The more funds are diverted from the world’s climate budget for compensating developing countries for loss and damage caused by climate change, the less there would be for building a viable CDR and CO2 use industry, and developing nuclear energy.

What is the case for loss and damage? That poor countries are the worst-affected by climate change wrought essentially by the rich countries when they grew rich through industrialisation. The North American CO2 emission per-capita is some 16 times that for a South Asian, true. That places the onus for climate action on the rich countries. It does not necessarily mean the rich should pay for damage caused in the developing world.

In the process of prospering, the rich world did not just spread around the middle. It also created the scientific and technological revolution that has benefited all humankind. Rich world capitalism, when it spread to the developing world, elevated people out of poverty by the million, innovated fertilisers, high-yielding varieties of staple crops and crop husbandry practices to enable Third World populations to defy Malthus, produced advances in healthcare and living standards that benefit everybody everywhere. Suppose the rich world demands compensation for building these valuable commons of humanity, and offers to pay for loss and damage out of the proceeds?

If the Maldives or the southern parts of Bangladesh were to disappear under rising sea levels, India can expect to see a large influx of migrants. When droughts kill off pastures, herders would transgress into settled areas, producing conflict. More people would seek to migrate, fleeing conflict. European politics would turn increasingly authoritarian, as politicians whip up xenophobia to gain support.

The loss and damage debate can wait. Let us focus on curbing global temperature rise.

This article was first published in the The Economic times as Enough of loss and damage: Climate budgets should all go to CO2 removal and nuclear power on November 9, 2022.