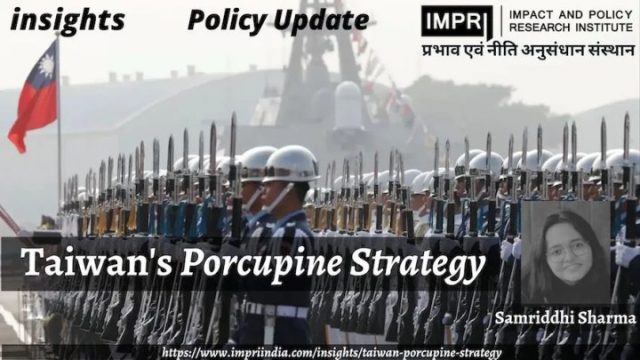 The Asian Century, with China’s emergence as a great power, has raised concern, excitement, and debates. Not only does China seek to have greater influence in the first chain islands but also develops the capability to push the US Navy beyond it. Time and again China has shown its willingness to use force, the Chinese Foreign Ministry for instance has stated that options other than peaceful negotiations were on the table. In this climate, recent developments have drawn the world’s attention to Taiwan and its deterrence strategy.

In the face of the recent political developments from Russia’s attack on Ukraine to Pelosi’s visit have reignited the debate on Taiwan, its sovereignty, and its ability to fend off an invasion. So comes the age-old question about the mainland posing a threat to Taiwan’s security and sovereignty.

“These warm acts of kindness and firm demonstrations of support have reinforced Taiwan’s determination to defend itself,” these words of the Taiwanese President were followed by missile tests, military drills, cyber-attacks, blockade-style interruptions of Taiwanese shipping ports, and aerial traffic by the PRC.

China-Taiwan: A Peek into the History

China and Taiwan, officially, the Republic of China share a long history spanning back to the Qing Dynasty rule, to losing it to the Japanese and finally regaining control after the Japanese defeat in the second world war. Governed independently since 1949, the One-China Principle, Xi’s rhetoric on China and push for reunification has raised eyebrows. In the 19th Congress report, he stated ‘complete national reunification is an inevitable requirement for realizing the great rejuvenation of the Chinese nation’ thus underlining the determination on Beijing’s part.

The reunification is central to Xi’s China Dream, the distant politics, drifting identities, and cultural ties between the PRC and Taiwan have added fuel to his worst fears.

What is Porcupine Strategy?

Asymmetrical warfare is a term associated with warfare between parties with great power disparity. The porcupine strategy falls under this head. As the name suggests fends off the aggressor/the stronger party’s weakness. First propounded by William S Murray in 2008, the disadvantaged power tries to exploit its enemy’s weakness and evade its strengths. Overall Defence Concept has come under the limelight due to the current war in Ukraine. The strategy is multidimensional and calls for investment in intelligence building and making use of things already available like geography and population.

The strategy aims to spend on nooks and corners which will drive the cost of war so high for the aggressor, and increase investment in non-conventional areas. Its primary aim is to make the invasion very difficult and costly for the enemy. Taiwan has been building crisis response capabilities. With China’s military, population, tanks, artillery, fleet strength, and active soldiers all greatly outnumbering Taiwan’s, spending on swift and sophisticated defense tactics and weapons. The Ministry of National Defence 2019 report highlights the changes to the military strategy now focusing on protecting its littoral and near-shore coastal areas, as well as a greater reliance on air and naval forces.

Taiwan has stacked up large inventories of anti-air, anti-tank, and anti-ship weapons and ammunition. That includes unmanned aerial vehicles (UAVs) and low-cost munitions like mobile coastal defense cruise missiles (CDCMs), which can destroy China’s expensive naval vessels and naval equipment. It is spending on a sophisticated early warning system to save time and avoid surprise offensive moves by the counterpart.

Mobilizing men, weapons, and weaponry would require movement across the water body- the strait, here comes the role of monitoring devices, tracking movements along the coast giving time for Taiwan to prepare,  coordinate and act. A densely populated landmass, manageable topography, and easy-to-stabilize armed force all work in Taiwan’s favor. According to a 2017 report published by the RAND foundation, there are 2.5 million men in the military reserve system plus 1 million civil defense volunteers.

The modernization program visions a decrease in active duty force and a transition to an all-volunteer force, though this has faced several roadblocks along the way. In addition, the country has also been manufacturing indigenous defense weapons like the Teng Yun. Apart from these, Taiwan has been working to develop new capabilities in the form of shore-based mobile missiles, unmanned aerial systems, offensive, and defensive information and electronic warfare, and critical infrastructure protection.

Now the question remains, will China go as far as launching a full-blown attack on Taiwan? This points out a greater question about China’s peaceful rise. Wars or say the more conventional form of war becoming redundant, the exorbitantly high cost of war militarily,  economically, and in terms of national and international image, it’s still difficult to comment on the future of this conflict. The US has historically maintained a “one-China” policy based on the TRA, the recent development points otherwise, this ambiguity has attracted attention.

Zinya Salfiti, Jack Detsch, et al. “The U.S. Is Getting Taiwan Ready to Fight on the Beaches.” Foreign Policy, 8 Nov. 2021