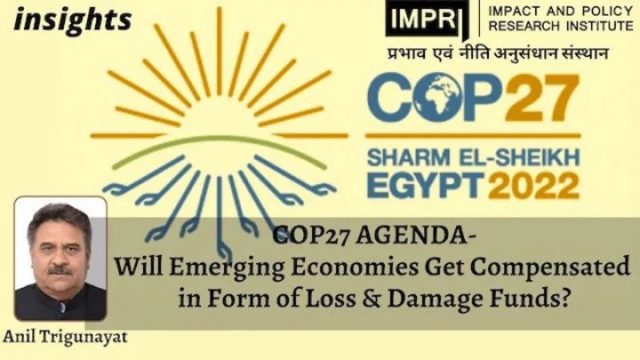 At this stage it looks a great point for discussion at the Conference as the climate diplomats from the developing world expressing hope of some forward movement and justice to the ‘Loss & Damage’ agenda. But the wealthy economies are apparently covering their backs through the recession and Eurasian war by pumping in more money into buying more and dangerous weapon systems. So, the concern is that will there be again a tepid response to a meaningful financial commitment.

The 27th Conference of the Parties (COP27), the UN climate change conference,  opened in the beautiful and touristic Egyptian city  of Sharm El Sheikh by the side of the Red Sea,  which is as such ironically under geo economic and strategic contestations among rival powers. Since the 26th conference in Glasgow last year, the world has been facing not only the aftereffects of the pandemic but more severe challenges of the Russia-Ukraine war as well. This has  created the ‘4F’ crisis which entails unprecedented challenges of Food, Fuel and Fertiliser and now adding Finance to it.

Weaponisation of these four serious challenges by the super powers in this war has opened new fronts to contend with which have a direct impact on Climate change and the global fight against it . Reverting to coal and  other polluting fuels with a vengeance amidst the gas crisis would surely recede the climate mitigation agenda by decades. A concerned UN Secretary General Antonio Guterres warns that; “The impacts of climate change are here and now the loss & damage that they cause can no longer be ignored…it is a  moral imperative and a question of solidarity and climate justice.

“we are on a highway to hell with our foot on the accelerator.  Alas, the Green story continues to be  written in Black,” he added.

For over a decade, talks about introducing and adhering to ‘Polluter Pays Principle’ have been held in vain and kept out of the purview of the agenda by major powers and polluters . Even the $100 billion annual payment to defray costs of adaptation, mitigation and adoption of green technologies has remained a mirage . COPs happen and COPs end with a cry for saving the climate and the world and targets and threats are reiterated vehemently and then business as usual begins .

Call for climate justice by the developing world has been gaining ground as they continue to suffer while the Millennium Development Goals and Sustainability Development Goals recede  into oblivion. This time round finally the Egyptians have been able to manage to place the climate compensation by rich countries on the agenda as ‘Loss & Damage“.

At this stage it looks a great point for discussion as the climate diplomats from the developing world expressing  hope of some forward movement and justice . But the wealthy economies are covering their backs through the recession and Eurasian war by pumping in more money into buying more and dangerous weapon systems, if the SIPRI statistics are to be believed.

So one could expect a tepid response or a cold opposition to any meaningful financial commitments by a specified date as the Egyptian COP27 head Sameh Shoukry hopes to pin them down  to a conclusive decision by 2024. Whether trillions of dollars in compensation will follow or even acknowledgement of the deep injury done to the developing world  is a million dollar question -the answer to which is likely to be more Nays than Yeas.

We have witnessed the story of the Trumpian Presidency when the USA walked out of Paris Agreement.  President Biden was back to the forum but follows the old and beaten track of forcing every one to yield and commit irrespective of their ladder of development putting the developing world to a continuing disadvantage. As the estimates indicate that Republicans might gain advantage in both US Congress and Senate and if  Trump returns in 2024, there could be a dangerous set back for the climate change alleviation efforts.

India has stood for the climate justice and rationality of approaches by being a voice for the developing and under developed world by adhering to the principle of equity and differentiated treatment. India’s stance has been hailed because, despite the developmental differential, New Delhi has taken upon itself much greater responsibility for resorting to large scale renewables enterprise and launched the International Solar Alliance (ISA)  encouraging over 150 countries to take advantage of this international initiative.

India also launched LIFE ( Lifestyle for Environment )  as a global  platform movement focusing on goodness and rationality of the humans to exploit their synergy to deal with the climate change crisis by abdicating mindless and climate harming consumption patterns across the spectrum through collective sensitisation efforts. Prime Minister Modi even committed India to net zero emissions by 2070, and it could perhaps achieve that even sooner.

At COP27, New Delhi would be keen to pursue the climate finance negotiations supporting Cairo and other developing countries to get a fair deal in transfer of green technologies through meaningful, just and fair collaborations and requisite finance by the tech providers and rich homies without further delays and road blocks . Equity and justice have to be the essential ingredients if any justifiable progress, with regard to loss and damage to the developing world, is to be claimed in Egypt and beyond .

Green Apartheid may be a reality and we may have to fight for Loss & damage as well as just transition and climate justice with every argument, incentive  and innovative financing with polluter pays principle to achieve net zero emissions through extensive decarbonisation both domestically and internationally as there are no green or black compartments which would not blend sooner than expected.

This article was first published as COP27 Loss & Damage – Who Pays to Whom and When? in CNBC TV 18

Read another piece by Anil Trigunayat – Terrorism: An Unflinching Danger in IMPRI insights