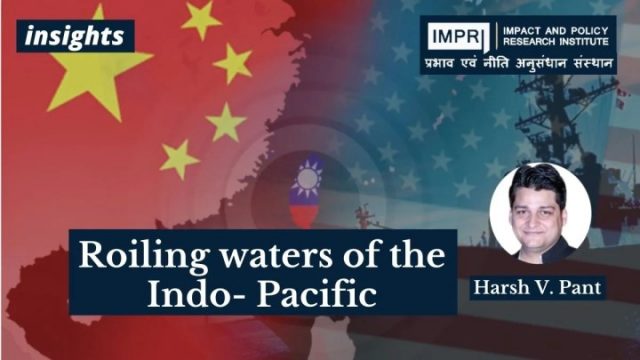 Even as the world continues to be focused on the challenges being posed by the Russian aggression in Ukraine, the battle lines in the Indo-Pacific are getting sharply defined. Addressing the Shangri-La Dialogue in Singapore earlier this month, the US secretary of defence, Lloyd Austin, made it clear that the United States of America would continue to stand by its allies, including Taiwan.

Even as the world continues to be focused on the challenges being posed by the Russian aggression in Ukraine, the battle lines in the Indo-Pacific are getting sharply defined. Addressing the Shangri-La Dialogue in Singapore earlier this month, the US secretary of defence, Lloyd Austin, made it clear that the United States of America would continue to stand by its allies, including Taiwan.

Austin met with his Chinese counterpart, Wei Fenghe, on the sidelines of the Dialogue where the two reiterated that they want to better manage their relationship, but there was no visible movement of any breakthrough in resolving differences. When it was Fenghe’s turn to take the podium, he thundered that the “pursuit of Taiwan independence is a dead end” and warned that “if anyone dares to secede Taiwan from China, we [China] will not hesitate to fight.”

This was a reminder that Taiwan is now the most important flashpoint in the Indo-Pacific as relations between the world’s pre-eminent power and its ostensible challenger are worsening. China has been repeatedly intruding into the Taiwanese air space in recent months as a show of force. In May, Taiwan had to deploy 22 fighter jets, as well as electronic warfare, early warning and anti-submarine aircraft to warn off 30 warplanes sent by China into its air defence zone.

During his visit to Japan, the US president, Joe Biden, had warned China is “flirting with danger” over Taiwan, underlining the American intent to intervene militarily to protect the island if it is attacked. This was the second time that Biden had suggested the US would defend Taiwan in what is perceived to be a change in American policy. Although White House officials later clarified that the US policy on Taiwan remains unchanged, a deliberate element of vagueness is creeping in when it comes to Washington’s posturing.

This is significant as Biden has linked the China-Taiwan issue to the Russian invasion of Ukraine. Biden said, “[I]f there is no rapprochement between Ukraine and Russia… then what signal does it send to China about attempting to take Taiwan by force?” Beijing was quick to rebut this parallel by arguing that “the Taiwan question and the Ukraine issue are fundamentally different”. But in his response to a question whether, contrary to his approach in Ukraine, he would use military force to defend Taiwan, Biden was clear: “Yes … that’s the commitment we made…”

There are pressures on American policy posture towards Taiwan as an economically and militarily powerful China pushes Taipei on multiple fronts, presenting a reunification as a  fait accompli. The former Japanese prime minister, Shinzo Abe, suggested that it is time for America to impart a new clarity in its policy and make it clear to Beijing that Washington would defend Taiwan. In Abe’s assessment, this may enhance deterrence in the region. But it is equally likely that Beijing would take this shift as  casus belli  and Taiwan will come into the crosshairs of great power politics.

The debate on Taiwan is now reshaping the contours of US-China engagement like never before. After dozens of Chinese warplanes entered Taiwan’s self-declared air defence identification zone, a US Navy P-8A Poseidon reconnaissance plane flew over the Taiwan Strait in a demonstration of the US’s “commitment to a free and open Indo-Pacific”. This led to the People’s Liberation Army Eastern Theater Command mobilising air and ground forces. This new aggression is the new normal in China-US ties. Fifty years after the former US president, Richard Nixon, flew to China and reset the terms of engagement between the two countries, a new phase has begun in this bilateral partnership. The issue of Taiwan is now at the centre of their engagement.

The Ukraine crisis is creating new learnings on both sides of the equation. The waters of the Indo-Pacific are roiling. For all regional nations, including India, this is a moment to carefully reflect on their own policy choices and prepare accordingly for a confrontation that is beginning to shape the contours of geopolitics.

This article was first published in The Telegraph as Roiling waters on 29 June 2022.