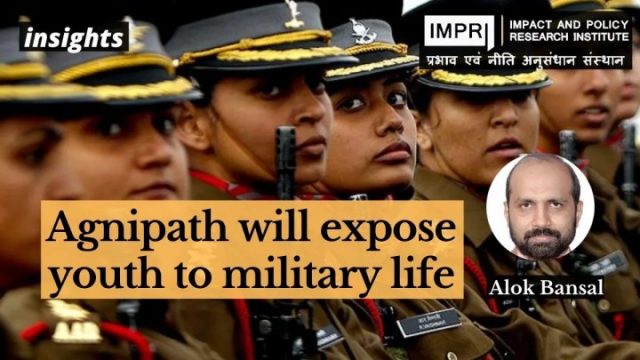 The recently announced ‘Agnipath’ scheme or Tour of Duty is a good step because it exposes a larger section of Indian population to the military way of life and gives them a wider exposure. It also provides the nation with a large pool of disciplined workforce, with varied skill sets. For long, there has been a demand for compulsory military service for all Indians to instill in them a strong sense of nationalism coupled with diligence and dynamism.

It was argued that this nationwide exposure will make citizens rule-abiding and raise them above narrow regional and sectarian outlook, besides enhancing their physical fitness levels. This trained workforce can also act as reservists in times of national emergency. Now that the Narendra Modi government has taken the first step towards exposing the population to military service, it is being criticised.

Human mind always resists transformation and all changes have been opposed by those benefiting from the status quo, more so in organisations with an entrenched mindset like the armed forces. Consequently, the retired officers are at the forefront of criticism of ‘Tour of Duty’. The scheme has been accused of diluting the professionalism of the armed forces. They also feel that the process will result in mixed units, who will lack cohesion and hence regimentation, which will reduce their effectiveness. There is also the criticism that with the induction of women in all trades, a unit’s fighting efficiency and rigour will reduce.

As regards regimentation, there are mixed units in the army, which have in no way performed lesser than the ‘pure’ regiments. In any case, dedication is a factor of motivation and not of the number of years that one puts in. The example of western countries indicates that the induction of women in no way reduces the efficiency, but in most cases enhances it. More significantly, the ‘Tour of Duty’ would reduce the average age of the force thereby enhancing its youthful profile and fitness levels.

There is also an apprehension that this youthful population with military training could “create political militias”, if they cannot find suitable employment avenues. However, a young person aged 21-25 with a nationwide exposure and having led a disciplined life will have much better employability than any other youth from a similar background. More significantly, the ‘Tour of Duty’, coupled with the money received, will prepare them for self-employment. Of course, both the central government and the state governments as well as the society at large will need to provide an enabling environment for their absorption into other walks of life.

Issues with ‘Tour of Duty’

It, however, does not mean that there are no problems with the military scheme as promulgated. Indian bureaucracy has in the past successfully ruined many brilliant ideas propounded by the Modi government — ideas such as demonetisation and lateral induction into the civil services. Similarly, ‘Tour of Duty’, which should have primarily been a scheme to expose the youth to the military way of life and thereby enhancing their skills and employability, has been converted into a cost-cutting exercise. Consequently, while reducing the experience of an average service person, it has also gone for reduction of workforce, whereas ideally what is lost in experience should have been made up in numbers.

More significantly, in trying to cut costs, the attractiveness of the military scheme has been reduced considerably. With a take home salary of Rs 21,000, armchair bureaucrats have placed an Agniveer, who stakes his life for the country, even below the total emoluments of a lower division clerk. More significantly, there is no Dearness Allowance admissible to Agniveers.

Consequently, with expected rise in inflation, due to increasing energy prices, this amount may soon become insignificant. Even more significantly, the current scheme entails that an Agniveer will be thrown out if his medical category is lowered permanently, even if the cause is attributable to the service. Consequently, an Agniveer who loses a limb or more fighting the enemy or an insurgent in the first year itself, would leave the service with mere insurance of a few lakh rupees and no assurance of rehabilitation.

Similarly, while military service will no doubt enhance employability, it will take some time and efforts to breach the established mindsets. As a result, there is a need for some reservation for former Agniveers in jobs in both central government and state governments. Also, there needs to be provisions to provide them with cheaper credit to start their own businesses.

The people coming out of ‘Tour of Duty’ would make ideal recruits for police forces, especially the Central Police Organisations (CPOs), but despite 5th and 6th Central Pay Commissions clearly recommending ex-servicemen’s induction into the CPOs, it has not been implemented by bureaucrats, who occupy the top echelons of CPOs and consider them their handmaidens. It is essential that at least 25 per cent of jobs in all CPOs be reserved for former Agniveers. This will provide CPOs with trained workforce, thereby reducing their training costs, and will ensure that no Agniveer remains unemployed and disgruntled after his ‘Tour of Duty’.

The Modi government has started a brilliant initiative to expose India’s youth to the military life. It should be seen as a national project, rather than just a defence ministry initiative to cut costs. It must, therefore, not be allowed to fail due to bureaucratic machinations.

This article was first published in The Print as ‘Tour of Duty’ will expose youth to military life. Don’t let bureaucracy fail it like note ban on 15 June 2022.