Home Insights The G7 is one part of India’s pursuit of a multipolar world...
Facebook
Twitter
WhatsApp
Linkedin
Email
Print 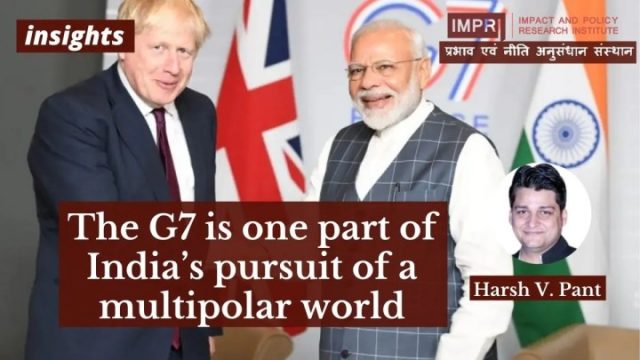 Even as leaders of the G7, a grouping of the world’s seven richest nations, were meeting in Germany, Russia was busy bombarding Ukraine in a show of strength. Just before the summit began, Moscow unleashed a series of strikes across Ukraine using long-range missiles. And during the summit, reports came of Russian missiles hitting a shopping mall in the Ukrainian city of Kremenchuk.

Against this backdrop, G7 leaders tried to project a sense of unity in support of Ukraine for “as long as necessary” and promised to take serious steps to cap the Kremlin’s income from oil sales that are financing the war. They also imposed new sanctions on Moscow to restrict its ability to import technologies for its arms industry.

Unity was the buzzword and the United States (US) President Joe Biden had it on the top of his agenda. “We have to stay together,” he told Germany’s Chancellor Olaf Scholz, underlining that “[Russian President Vladimir] Putin has been counting on it from the beginning, that somehow NATO would, and the G7 would splinter and… but we haven’t, and we’re not going to.” Scholz underlined that unity over Ukraine was the group’s clear message to Putin. “We are united by our world view and by our belief in democracy and rule of law,” he insisted.

Against this backdrop, G7 leaders tried to project a sense of unity in support of Ukraine for “as long as necessary” and promised to take serious steps to cap the Kremlin’s income from oil sales that are financing the war.

But this rhetoric could not hide the simmering worry among the leaders that this unity can easily wither away. As the war has dragged on, the western public is getting restless with rising inflation and a splintering of support for Ukraine remains a distinct possibility, something that Putin will be watching closely. Also, in most G7 nations, domestic politics is getting murkier as leaders such as Biden and the United Kingdom’s Boris Johnson face growing dissent within their own parties.

French President Emmanuel Macron suffered a significant loss of support in the recent parliamentary elections. Even in Germany, there is a growing divide on its Russia policy. So, the G7 members had to tread cautiously as they made their case to their own people and to each other for the best possible response to the Russian aggression. This summit saw them achieve seeming unity on the issue, but it’s unclear how long it will last.

The other major focal point of this year’s summit was a $600 billion infrastructure plan for emerging economies in response to China’s global influence via the Belt and Road Initiative (BRI). This Partnership for Global Infrastructure and Investment (PGII) will have the US raise $200 billion through grants, federal funds and private investment, while the EU pledged around 300 billion euros.

With the aim of presenting a “positive powerful investment impulse to the world to show our partners in the developing world that they have a choice,” this partnership is geared towards tackling the climate crisis, improving global health, achieving gender equity and building digital infrastructure. At last year’s summit, the Build Back Better World initiative was announced, but could not gather momentum. PGII is an attempt to rectify past problems and make it operational quickly.

With the aim of presenting a “positive powerful investment impulse to the world to show our partners in the developing world that they have a choice,” this partnership is geared towards tackling the climate crisis, improving global health, achieving gender equity and building digital infrastructure.

India is now a regular invitee to G7 summits and this year, despite New Delhi’s differences with the West over the Ukraine crisis, India’s presence, with Argentina, Indonesia, Senegal and South Africa, as a guest for the summit underlines its growing weight in global conversations. As a major democracy and a rising economic power, India’s participation is key in resolving global governance challenges and today, more than any other time in recent history, New Delhi is willing to play a role in providing solutions to global problems.

Prime Minister Narendra Modi’s focus was also on showcasing India as a responsible global stakeholder as he highlighted India achieving the target of 40% energy-capacity from non-fossil sources nine years before time and invited the G7 countries to invest in the vast untapped market for clean energy technologies.

At a time when the world order is intensely polarised, India remains one of the few nations which can engage with both the G7 and BRICS in a matter of days with élan. New Delhi has been consistent about its stance on global matters and in the process has managed to generate a sense of trust with its varied interlocutors. India’s pursuit of a truly multipolar world makes it incumbent upon New Delhi to engage with multiple partners while never losing sight of its own vital interests. Partnerships should enhance India’s strategic autonomy, not constrain it. India’s G7 engagement should also be seen in that light.

This article was first published in Hindustan Times as The G7 is one part of India’s pursuit of a multipolar world on 29 June 2022.