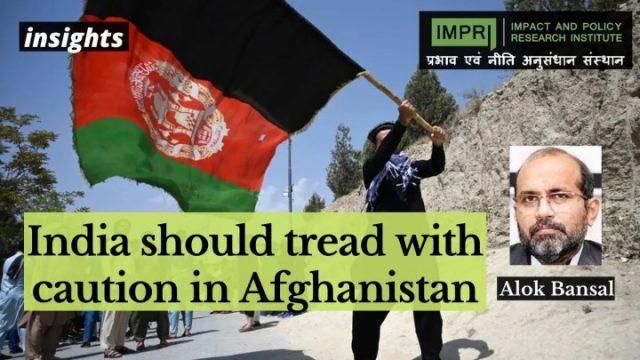 Reports emanating from Kabul, indicate that India has ‘reopened’ its embassy in Afghanistan, thereby becoming the 15th country to do so. The official statement has indicated that India has sent a ‘technical team’ which is going to be based at Kabul. The development follows the visit of an Indian delegation in early June, which was led by the joint secretary dealing with the region in MEA.

The delegation met the acting foreign minister of the Emirate, MAK Muttaqi, and the ostensible reason for its visit was to oversee the delivery mechanism of India’s humanitarian assistance and visit places where Indian programmes/ projects are being implemented. However, as is now, amply evident, the real reason was to work out the modalities of opening the mission.

This raises serious questions as to why New Delhi is so keen to sup with this obscurantist regime, which represents nothing but evil and stands for all those ideals that are an anathema to our secular, socialist and democratic republic. The primary objective behind this undue haste appears to be a belief that India can use Taliban against Pakistan and this belief primarily stems from the fact that in recent past Pakistan has bombed places inside Afghanistan, where TTP camps were believed to have been functioning.

Also, Afghanistan continues to provide safe havens to not only TTP, SSP, LeJ, JeM, LeT and other radical outfits, with which it has ideological affinity, but also to Baloch nationalists and other anti-Pakistan groups. Another reason, cited by Taliban supporters and there are many in India, is that all the major countries including the US are in any case dealing with Afghanistan.

They feel that by not doing so we will lose out on its ‘vast’ resources, ‘huge’ market and access to Central Asia. They also feel that by not opening the embassy, we will be letting down the Afghan population, which holds us in high esteem and is looking up to New Delhi to provide succour.

However, New Delhi needs to take a reality check. Irrespective of minor differences that keep popping up and will continue to do so between Pakistan and Afghanistan, the fact is that both Islamabad and Rawalpindi have invested heavily in Taliban and this relationship is decades old. No efforts will be able to dent it in the foreseeable future. Taliban may at the moment want to project to both their domestic audience, as well as the international community their distance from Islamabad, but their umbilical cord is attached to Rawalpindi, and it would be foolhardy to overlook this fact.

Unlike the Western countries, which are far removed from Afghanistan, India is next door and Taliban’s presence in Kabul will keep motivating jihadis of all shades and hue, in the entire region. Udaipur may just be the beginning. Notwithstanding ‘large deposits’ of iron ore, copper and lithium that are believed to exist in Afghanistan, India has not been able to bring it to its soil economically and will not be able to do so in years to come, as neither Pakistan nor Iran seems to be a viable transit option for extracted minerals. Similarly, as long as Pakistan exists with its present mindset, accessing Central Asia through Afghanistan will remain a pipe dream.

There is no doubt that the Afghan population holds us in high esteem and we may need to help them in this hour of crisis, but all the Indian aid must either be routed through UN agencies or through the legitimate government of Afghanistan led by Amrullah Saleh. It must be appreciated that having brought the Taliban to the throne of Kabul, it is ISI’s responsibility to sustain them in power, not only militarily, but also financially.

One of the contributory factors for the shortages of wheat and fuel in Pakistan is their moral obligation to meet Taliban’s requirements. Consequently, any assistance that is routed through Taliban helps ISI to reduce its costs, at a time when Pakistan is going through a severe economic crisis.

It needs to be appreciated that Taliban is an ideological organisation and notwithstanding the attempts by many to create a Brand 2.0, it has shown its true colours. Having promised the moon during negotiations in Doha, it has gone back to its old ways, as soon as it consolidated power and all its promises about inclusive government and women have disappeared into thin air. On the ideological front it has not compromised even with its allies like Pakistan and China.

Consequently, it has never handed over any Uyghur militant to China or a TTP cadre to Pakistan. It needs to be appreciated that with ISIS trying to occupy the same ideological space, Taliban cannot dilute its ideology, even if it so wants, as that could lead to its cadres deserting it for Islamic State. Anyone with rudimentary knowledge of Islamic theology knows the significance of an Islamic Emirate in Khurasan, which Taliban professes to be. It has boosted the morale of all jihadi organisations in the region.

It is therefore prudent that New Delhi treads with caution as far as its presence in Kabul is concerned. It needs to be appreciated that the majority of Afghans do not support the regime in Kabul and the Taliban government is in no position to provide fool-proof security in Kabul, as was clearly evident during the attack on Gurdwara at Kart-e-Parwan in Kabul.

This article was first published in FirstPost as Dealing with Taliban: Why India must tread with caution in Afghanistan on 1 July 2022.