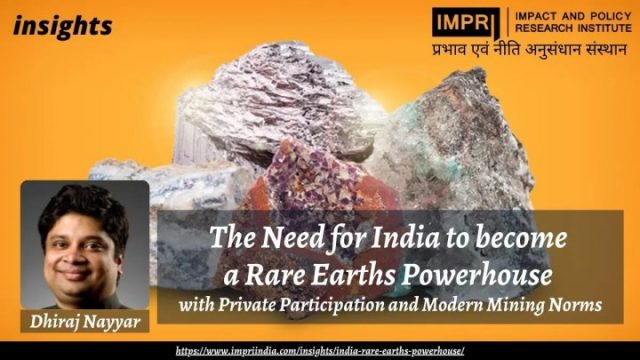 It is unlikely that many people, other than students of chemistry, have heard of scandium, yttrium, lanthanum, cerium, praseodymium, neodymium, promethium, samarium, europium, gadolinium, terbium, dysprosium, holmium, erbium, thulium, ytterbium and lutetium. Together, this group of 17 is known as Rare Earth Elements-a better known term-whose demand is on the rise for many critical applications in modern manufacturing, including electric vehicles, renewable energy and high-tech electronics.

India is almost 100% import-dependent for most rare earths. Interestingly though, India has great potential for domestic production possessing the fourth-highest reserves of rare earths in the world. And the ministry of mines is proposing to capitalise.

Why are rare earths strategic?

Rare earths are used in small quantities but have qualities that make them essential. Neodymium, for example, is a critical component for permanent magnets and has the ability to carry material 1,300 times its own weight. Neodymium-based permanent magnets are key components in EV traction motors and wind turbines. Currently, the demand for these in India is small, at around 900 tonnes per annum, because domestic manufacturing of EVs and wind turbines is still limited.

Rare earths are costly. Like neodymium, dysprosium is also an important component of permanent magnets that will be used in EVs and wind turbines. Europium is necessary for LED bulbs and colour television screens. Samarium is used in optical lasers. Several rare earths also have important uses in emerging hi-tech medical technologies.

Why does India not produce enough rare earths?

What is a matter of particular concern is that the global supply scenario for rare earths is highly concentrated, much more than oil and hydrocarbons, which poses a strategic challenge. Until a few years ago. China controlled 90% of the supply of rare earths. Now, after aggressive production by the US, Australia and Canada, China’s share is down to 60% but still dominant. India has greater reserves than the US and Australia, only behind China, Russia and Vietnam. With Russia embroiled in conflict, the onus is on India to emerge as a supplier not just for domestic use but internal consumption

In India, rare earths are classified as atomic minerals: and are therefore not on par with other minerals. Interestingly, rare earths are actually not “rare” in nature; they occur abundantly but globally are often not concentrated enough to make for viable extraction. In India, they are found in extractable form in beach sands (of which the country has abundance) and in rock formations known as monazites. The reason that they are classified as atomic minerals is because some of these elements occur in the earth’s surface along with thorium and uranium which are radioactive minerals.

Thus, mining for rare earths is reserved exclusively for government companies of which there are only two in India: Indian Rare Earths Ltd (owned by Gol) and Kerala Minerals and Metals Ltd (owned by Kerala government). Their production capacities and technological capabilities are limited which is why India is import-dependent. Beach sand mining was permitted until a few years ago but was banned in 2016 in an attempt to conserve strategic minerals including rare earths and thorium.

The ministry of mines has recently proposed moving the 17 rare earths elements outside the ambit of atomic minerals so that commercial mining by private entities and other PSUs can take place to help reduce India’s import dependence which is bound to increase in both volume and value as the energy transition and domestic manufacturing of electronics gather pace. This is the only feasible way to expand production. Concerns about the presence of radioactive minerals and their use are legitimate.

But those concerns must be addressed via regulation than a blanket ban. Private players can be mandated not to extract thorium and uranium from monazite rock or beach sands and to restrict themselves to rare earths. The leftover ore/ rock once rare earths are extracted may be returned to the designated government agency. Alternatively, the private companies may be permitted to extract any radioactive minerals but sale can be restricted to government. However, to not extract rare earths more aggressively would impose a big cost to the economy. A pragmatic approach is the need of the times.

This article was first published in The Times of India as Why India should become a rare earths powerhouse: But this requires private participation and modern mining norms.

Read another piece by Dhiraj Nayyar The real Agni-Path to better jobs in IMPRI insights.

Read another piece by Dhiraj Nayyar Correct Approach to Disinvestment: Dribble Small Stakes Throughout the year in IMPRI insights.

Read another piece by Dhiraj Nayyar Civil Services on Pedestal in IMPRI insights.