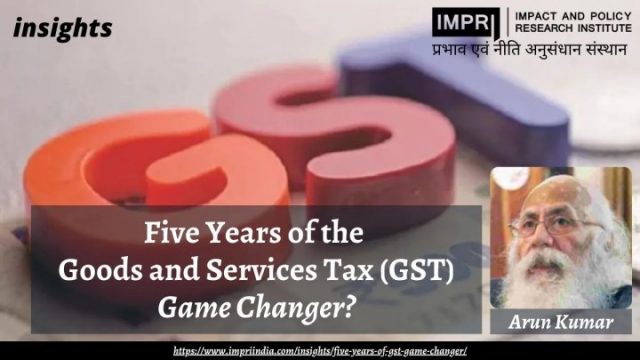 India’s goods and services tax (GST) regime was launched with much fanfare on July 1, 2017. It was marketed by many as the nation’s second ‘tryst with destiny’, a reform that would unify the country by creating a single market while ushering in excellent ease of doing business.

It was said that gross domestic product (GDP) would rise by 1% to 2%, inflation would decline with the elimination of the cascading effect and the ‘black economy’ would be checked. It was supposed to benefit backward states which are consuming states since GST is a last-point tax – collected where the final sale occurs. It was pitched as a win-win situation.

Government officials, writing on the occasion of the completion of five years of operation of GST, have enumerated the various benefits but admitted to some problems which they feel can be sorted out soon. The Congress has asked for a revamp of the GST since it is fundamentally flawed that a bit of tinkering cannot resolve. Many of the states have been expressing their concerns for some time, most recently in the just-concluded GST Council meeting.

States also opposed GST because it proposed one common tax rate on a good or service all over the country. This loss of power to fix the rates of tax on various items undermines fiscal federalism.

The needs of Assam are very different from those of Gujarat, which is  why a certain degree of autonomy is crucial. Further, states feared loss of revenue due to the shift from the then prevailing tax regime to GST.

Under the GST regime, 17 of the-then existing indirect taxes were merged into one. To collect the same amount of revenue as earlier, the GST rate had to be suitably fixed. This was referred to as ‘revenue neutral’ rate. If not correctly fixed, revenue collection could fall and aggravate fiscal problems as recent reports suggest.

The states agreed to come on board when their concerns were addressed.

Firstly, they got some autonomy to collect revenue from their cash cows – alcohol and petroleum products. These were kept out of the purview of GST. States could levy excise duty on the former and VAT (value-added tax) on the latter. This helped during the pandemic when tax collections declined sharply. But this provision implies that cascading effect is only partly eliminated. GST was expected to eliminate the cascading effect, which raises the effective tax rate on goods and services and thereby help moderate inflation.

Second, the Union government was to compensate states for five years for any shortfall in revenue growth below 14% (on the base of 2015-16). For this purpose, a compensation cess was proposed on luxuries and sin goods. The Union government has now decided to continue it for four more years but it has not yet acceded to the states demand for continuing the compensation. This mechanism also ensured that the producing states would not lose out.

Third, a GST Council with representation of each state and the Union government was to decide on GST related matters. Voting is provided for in case of lack of consensus. The Union government has one-third of the votes and the states together, two-third.

Since 75% of the votes are required to pass a resolution, the Union government effectively has veto power. Further, it can twist the arm of the smaller states to vote in its favour and currently, the ruling party in the Union can push its agenda since it also rules in many of the states. So, while technically federalism is maintained, in reality it is diluted. The recent Supreme Court ruling that the GST Council’s diktats are not binding may strengthen federalism.

Provision of input credit (ITC), e-way bills and the Goods and Services Tax Network was to help improve compliance and raise tax collection to improve the fiscal situation of the states and the Union government. In the initial years, monthly tax collections remained below Rs 1 lakh crore. But now, in spite of COVID-19, for eight months, the monthly tax collection has been above Rs 1.3 lakh crore with a record collection of Rs 1,67,540 crore in April 2022.

With the economy still at about the pre-COVID level in 2019, does this increase in collection reflect success of GST?

How well has it done?

GDP growth rate, instead of rising, has fallen quarter-on-quarter from 8% in Q4 of 2017-18 to 3.1% in Q4 of 2019-20, just before the pandemic hit. Of course, the entire decline cannot be attributed to GST but it has contributed substantially to it by damaging the unorganised non-agriculture sector which is 31% of the GDP. This sector was first hit by demonetisation which was implemented 8 months before GST was introduced.

If a part of the increase in GST collection is attributed to better compliance, it points to the extent of tax evasion in the organised sector. GST has not been able to check the growth of the black economy due to multiplicity of rates and complexity of rules. While a category of good or service has one tax rate nationally, across goods and services there are many tax rates (at least 8).

This goes counter to the requirement of GST that there be one tax rate but in an economy like India that is not feasible given the poverty and diversity of production structures. Innumerable changes in rules have been announced and Courts have been flooded with cases. Fake companies to claim ITC have been detected. E-way bills have seen manipulations and corruption.

Due to the complexities and lack of clarity in official pronouncements, businesses and chartered accountants complain of difficulties. A company that operates nationally has to file forms monthly for each state of operation – adding up to hundreds of forms. The functioning of GST network has also caused problems from time to time due to the large volume of data required to be uploaded. Thus, the cost of compliance is high, especially for the unorganised sector since computerisation is essential to be a part of GST. Effectively then, the unorganised sector faces a challenge whether it is kept out of GST or brought under it.

Since the less-developed states have a proportionately larger unorganised sector than the better-off states, they have suffered more due to the decline of the unorganised sector. Thus, inter-state disparities have aggravated even though consuming states are supposed to benefit.

The real challenge posed by GST arises from the adverse impact on the very large unorganised sector. The second challenge is the presence of a large black economy in the organised sector and the resultant low direct tax-to-GDP ratio, forcing the government to try to collect more and more from indirect taxes like GST.

The direction for reform is clear. GST is a last-point tax – collected at the point of final sale. So, why not levy it on the MRP of the final product and collect it at the last point rather than at each stage of production and distribution. This would bring about simplicity, eliminate problems due to input credit, e-way bills, reverse charge, filing of hundreds of forms, inverted duty structure, etc. The disadvantage the unorganised sector faces and demand shifting away from it would be eliminated, leading to higher growth and buoyant employment.

The argument that India absolutely must have a GST regime, just because it exists in so many other countries is fallacious. The Indian economy is unlike other large economies and has its own issues which the present partial form of GST is aggravating rather than resolving. One cannot turn the clock back, but with five years of dealing with GST, it is clear that it needs a structural revamp.

Read another piece by Dr Arun Kumar on Modi Govt.- 8 years of Modi Govt. : Solution being the Problem in IMPRI insights.

Read another piece by Dr Arun Kumar on the Indian Economy- India is Not the Fastest-Growing Economy in IMPRI insights.

Read another piece by Dr Arun Kumar on Stagflation- Economy in Stagflation in IMPRI insights.