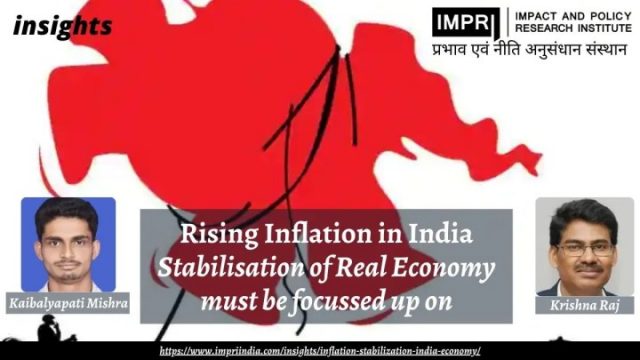 Inflation is a piece of bad news. In recent months, the pressure of hyperinflation that is galloping hope of the common man has stayed in the limelight with the fear of a continuous prevalence. The onset of COVID followed war-trodden global equations and the resultant crude oil price menace, this ripping effect of inflationary tendencies has over-burdened the recovery process in India. With a surge of 15.08% in WPI and 7.79% in CPI, the turbulence has invited strict actions from the central bank in terms of hiking interest rates with an upward calibrated stance.

Amongst these tumultuous situations, several structural questions have started gearing the discussion up in the academic and technocratic fora. Questions about the flaws of the existing framework of inflation targeting, its replication in real terms and possible viable alternatives are reasonable to be discussed. In this piece, we discuss the flaws of the inflation targeting framework in the current context and also the viability of other existing frameworks to curb, control and stabilize inflation.

The ambition of squelching price levels gave birth to the shift of focus from intermediate targets to inflation targeting during the last two decades. The reason behind economies accepting inflation targeting is manifold, however, in the framework, Central banks are unfortunate enough to experience greater criticism for increasing rates as compared to the praises for lowering them. In a country like India where the fiscal dominance (fiscal considerations dictating monetary policy) is relatively lower, have availed the RBI with the power to choose the appropriate instrument to achieve policy targets.

Thus, choosing the quantitative targets to do the inflation forecasting using the forward-looking operating procedure has grossly helped the monetary policy regime in India. The two major components of having an inflation targeting frameworks are independence of monetary policy (low fiscal dominance, seigniorage extraction tendency and lower fiscal commitment towards the targets) and a commitment to a particular exchange rate.

Though the independence front is dwindled due to several reasons in India, a stable exchange rate is unexpected with the whimsical view of the global equations. Thus, the question of the viability of the framework and its alternatives crops up, also with its possible customization. Another issue that is unearthed by research is that inflation predictability in developing countries like India is very difficult given its huge unorganised component. This poses the question of inflation being the monetary policy target in many developing nations like India.

The major issues that inflation targeting in India has been of both structural and functional nature. Structurally inflation targeting in India measures inflation from a fixed base weight index, which doesn’t entirely replicate the real economic conditions of the economy. Like in the current scenario of increased fuel prices, the war led to chaos in the financial market and requires a revised base weight index, to avoid overstating inflation. Several developed countries have adopted chain-based index systems that help get rid of overestimation and underestimation of inflation.

Similarly, the country wide heterogeneity of inflation expectation also needs to be taken into account in forming a representative expectation of the mass. Such a framework without proper measurement of inflation and inflationary expectations can involve very high real costs and can be counterproductive as well.

The functional issues that dominate the critiques of the inflation targeting framework are the ones about which the framework is almost passive. Firstly, in shifting from intermediate targets, like in other developing countries, the monetary policy framework doesn’t focus on the targets of unemployment and production in the country. Statistics and their replications are evident that unemployment in the nation has prevailed and increased during this operational period of the framework.

Secondly, the framework involves monetary variables like financial risks and uncertainties while becoming silent about the real economic variables in the economy. Lastly, it has been seen as mostly ineffective in stimulating demand in the country, as demand has been proportionately (equally and even more than) affected due to economic downturns over the years. In addition to the aforementioned issues, the dependency of inflation targeting on the effectiveness of the channel of monetary policy transmission also severely affects its effectiveness. Thus, the framework of inflation targeting doesn’t seem to be a credible lone saviour to the problems in India and it certainly requires substantial modification.

The modification that shall fit best in the current scenario is that of a dual mandate. A dual mandate necessarily includes two policy goals, one is to stabilize inflation and the other is to influence the real economy. By accommodating such a modification, the central bank can get rid of the inertia effect that monetary policy has on the real variables of the economy. According to a study by the Bank of International Settlements, price stability (inflation control) should be the prime monetary policy objective, in most OECD countries, however, the mandate stipulates that the central banks should stabilise the real economy.

Lastly, it is quite understandable that the relationship between the monetary and real economy is hugely influenced by the rate of inflation. Thus, inflation targeting is the primary objective, and should always be supplemented by the focus on real economic targets and their stabilisation. The major contribution of such mixed mandates will come in a crisis period like that of the one which the country is going through now. By using the mediums to influence the real economy the RBI can stabilize the real economy even though inflationary targets are not working effectively.

This article was first published at Open Forum as Inflation targeting in India: Why RBI should focus on stabilizing the real economy.

Read another article by Kaibalyapati Mishra Consequences of supply-side strategy to curb inflation in IMPRI insights.

Read another article by Kaibalyapati Mishra Tax on the Ultra-Rich for Equitable Distribution of Wealth in IMPRI insights.

Read another article by Krishna Raj INFLATION in 2022: Taming the Poor Indians in IMPRI insights.