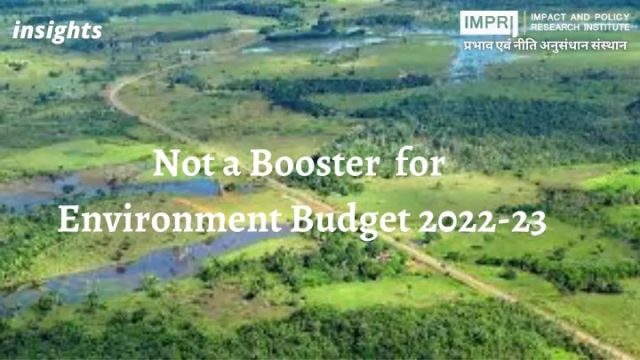 With the increasing global concerns over environmental issues and the country’s own environmental challenges mounting with time, what the fiscal policy has to offer to curb it has been an important question in light of the Budget 2022-2023 presentation on the 1st of February 2021. Center for Environment, Climate Change and Sustainable Development (CECCSD), IMPRI Impact and Policy Research Institute, New Delhi organized a Panel Discussion on The Environment and Union Budget 2022-23.

Despite the horrendous trend in pollution and all the growing environmental concerns, the budget allocation is decreasing. A significant push for infrastructure — roads, railways and airports — have serious ecological implications in spite of claims to be powered by green energy. Interestingly, keywords like ecology, environment, wildlife, pollution, ecosystem, nature, biodiversity do not find a single mention in the speech of the finance minister save in non-natural environmental contexts. He questioned, if all these are an indicator of the seriousness of the government in regards to environment.

Debadityo Sinha highlighted the push for industrialization especially in textiles and food processing. There has been an allocation of Rs 12,357 crores for the ministry of textiles and this addition is exclusively for industries, of which the large ones are likely to benefit. Besides, Ashish Kothari further added that the textile industries are extremely polluting, and huge industries have a huge ecological impact. The immense export potential and significant foreign exchange that happens adds to the environment challenge in the form of excessive transportation.

Bring up another aspect, Debadityo Sinha drew attention to the Deep Ocean Mission which’s allocation has increased from 150 to 650 crores. The fact that this is for mineral and hydrocarbon exploration and not for conservation of deep ocean is not a good sign. There has also been an allocation to other environmental research which has increased to 283 crores. There however seems to unclear information on what kind of research it will be used for, which again is problematic.

Dr. Madhu Verma flagged her concern that the booster budget is not spread across different sectors. On the bright side, there has been an increase in the budget value for Mission for Green India, and biodiversity conservation through allocation in Project Tiger and Elephant and promotion of millet production. While, this is good, it is insufficient with regard to the value of biodiversity which is not only monetary.

Pointing at the surface-level interventions she stressed on the need to focus on the details of it. For instance, the appreciable move to boost natural and organic farming fails to be wholistic. There is need for the budget to have a combination of incentive and compensations-based mechanisms when it comes to natural farming due to inability of farms to match production levels to former levels in the initial stage. The intervention needs to be wholistic, thus needs to focus on all stages like input subsidies, certification, cold storage, value chain strengthening, grading, and marketing mechanism. Lack of preparation can lead to failure in the organic farming front as has been the case in Sri Lanka, warned Ashish Kothari .

Dr Sharachchandra Lele elucidated on the energy part of infrastructure that has been painted semi-green. He highlighted that fiscal, administrative, and legal support for any intervention is important. Given that the budget is only the fiscal side, the actions on the other arms also need to be evaluated hand in hand. Supporting his argument with the classic example of fiscal allocation for ground water, CPCB and National Green Tribunal (NGT), he pointed out the absence of regulatory and administrative support as a result of which we see no impact on the ground.

In the case of energy, we see immense allocation, however it suffers from the problem in the underlying structure of the Indian economy which determines how the redistribution of fiscal policy happens. Since the entire model for supporting energy transition is a centralized capitalist model where there is monopoly or semi-monopoly, the benefit is steered toward the capitalists who will be disproportionately profited.

Therefore, pumping money into renewable electricity generation does not suffice, but it is crucial to address the discom problem (electricity distribution) which has no place in the budget. Furthermore, there is silence over the issue of wasteful consumption of energy and demand side management which poses a challenge as this demand driven sector cannot keep expanding sustainably and continually.

Critiquing the hypocrisy of the budget, Soumya Dutta believed in some misallocation in the infrastructure sectors as opposed to the current need. The claim by the finance minister that the climate change is the greatest external risk for the Indian economy, when juxtaposed with all the infrastructure development promoting more emission, the hypocrisy is evident. Infrastructure on its own is not bad and social infrastructure is integral to an economy, the tremendous increase in budgetary allocation for road transport by 68% is concerning, given the miniscule increase in other environmental sectors.

Unless the power for electric vehicles is local, the huge loos in transportation will make even the renewable energy sources very inefficient. Also, its use in public transport is important, however in general the public transportation sectors has been very gloomy for some time now. In his view, overall risk reduction and building resiliency is an element completely absent in the budget.

According to V R Raman, there is also an integrated approach that needs to be taken to tackle the air all issue.  There is insufficient focus on air quality, disaster resilience, environmental sanitation on small and medium towns for water conservation and water body preservation and eradication of manual scavenger. There has been budget allocation without any actual spending on the manual scavenger.

An action plan to improve the dignity of these environmental warriors has been absent over the years. In this regard decline in the budgetary allocation for NRGEA is likely to affect the decentralised activities made possible under the scheme at the grass root level.

Overall, there is a deep-rooted problem and the indirect relationships that affect the environment needs focus. The central budget needs to guide the direction of development. The environmental perspective however does not seem to be in the interest of the current government. Further rural and small towns need to be considered and a futuristic view needs to be taken.