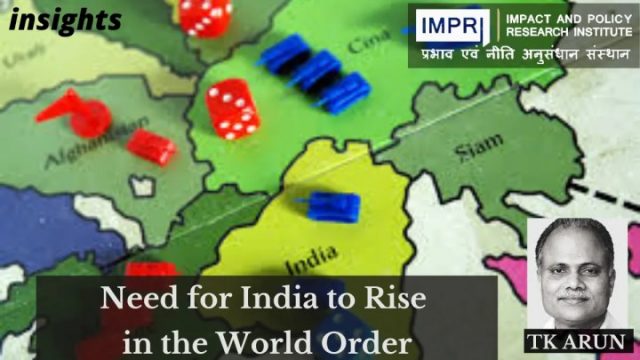 Two recent developments abroad have a significant bearing on India’s prospects. No, Rishi Sunak’s emergence as the next British prime minister is not one of them. In the second week of October, the US government released its National Security Strategy 2022 (NSS22). And, last week, the 20th Congress of the Communist Party of China (CPC) gave Xi Jinping unchecked power to lead China to glory as he defines it.

The NSS22 document identifies China as the US’ systemic rival, and Russia as a power to be constrained but lacking China’s ability to compete with the US across the board on every count of national power. The CPC Congress underlines China’s readiness to recast the world to end the former colonial powers’ dominance of the world order and their keenness to breach national sovereignty and meddle in the internal affairs of countries such as China, in the name of the ‘duty to protect’ human rights.

If History is Any Guide

China sees India as a country from which it has to wrest territory. The prominence given at the 20th Party Congress to the Galwan clash between Chinese and Indian forces in 2020 shows China’s attitude towards India. Xi Jinping is determined to restore the Middle Kingdom’s erstwhile glory, of which reclaiming deemed Chinese territory lost to imperial pressure and internal weakness is an integral part.

Washington designated India a ‘major defense partner’ in 2016, permitting the sale of sophisticated arms to India. NSS22 sees a role for India as a member of the Indo-Pacific Quad, which includes Australia and Japan, apart from the US and India, as part of the West Asian grouping I2U2 (India, Israel, the United Arab Emirates, and the US), and as a member of emerging economies, such as Argentina, Indonesia, Senegal, and South Africa, with interests aligned with the US, whose leaders can be admitted to the antechamber of the watering hole where the great and the good of the G7, the Western alliance’s core steering group, gather.

What NSS22 does not do is recognize a powerful India as the necessary and sufficient condition for keeping China’s rise peaceful. That China will continue to grow, qualitatively (it is already one of the world’s largest publishers of original scientific research) and quantitatively (overtaking the US as the largest economy) is not in doubt. Denying China access to advanced US technology, as the Biden administration has done, will only delay that process, not thwart it. And the global order would have to reconfigure, to allow a greater say for China in the assorted nodes of global governance and coordination that enable globalized growth.

The question, really, is how to prevent this process from turning violent and/or chaotic. The answer should be obvious but unfortunately is not: India’s emergence as a global power that can countervail China in strategic capability, economic heft, and technological prowess.

Does India have what it takes to become such a bulwark against an unruly China? The largest 16-64 age group of workers; the largest cohort of young people who can be trained in science, technology, engineering, mathematics, the social sciences, and humanities; historical goodwill across large swathes of the world; entrepreneurial dynamism that makes India home to the third-largest herd of native-bred unicorns; a long-ingrained culture that allows multiple faiths, languages, and ethnicities to not just tolerate one another and coexist, but also to positively cohere and thrive; a market economy capable of decentralized decision-making vital for creative destruction – these are strengths that qualify India to emerge as a countervailing power.

Stand Up for Your Place

Few in India take this global role seriously. Peddlers of hatred who sow the seeds of social schism certainly do not. Political patronage of sectarianism encourages opportunists in the media, police, civil service, and judiciary to amplify the harm. The education system works only in patches and, even there, valorizes pre-existing knowledge and authority, curbing innovation. Segments of Indian business damage India’s reputation by exporting shoddy goods, even toxic cough syrup that kills babies. External observers develop doubts about India’s potential.

Apart from collective awareness of and commitment to realizing India’s geopolitical potential, India needs shared clarity on external dynamics. A world in which Russia is a constrained minor power would be dominated by the US and China. China has hostile designs on Indian territory and sound reasons to stunt India’s strategic growth. In the absence of a powerful Russia, India has to turn to the US and its allies, to resist China, giving the US leverage that would smother India’s long-cherished strategic autonomy.

It is in India’s interest for Russia to continue as a center of global power, and for Europe to emerge as a power center in its own right. Why would China help Russia retain critical geopolitical salience? In order to avoid becoming the sole focus of tender American ministrations.

India has animus towards none. Its rise is good for itself and for the world, including China. A powerful India strips the menace from China’s further rise.

This article was first published in The Sanjaya Report as Rise, India, for the World’s Sake on October 26, 2022.

A Great Momentum of India’s IT sector