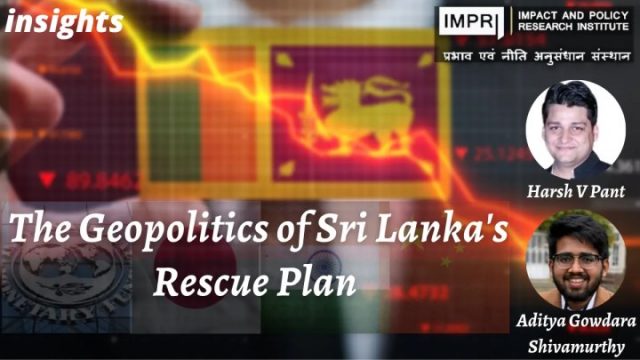 In September 2022, Sri Lanka finalized a staff-level agreement with the International Monetary Fund (IMF). After witnessing months of food and energy shortages and political instability, this four-year rescue plan, worth $2.9 billion, has certainly brought a sigh of relief in the island state. However, the conditions attached to accessing this fund will prove to be difficult, compelling Sri Lanka to accommodate the regional powers’ interests, and up its balancing game.

The IMF agreement has laid down the following conditions for the Sri Lankan government: Cut on spending, increase in taxes, policies against corruption, autonomy for the central bank, and a decline in the debt-to-gross domestic product (GDP) ratio. Most importantly, the IMF wants Sri Lanka to talk to its top bilateral creditors—China, Japan, and India —to restructure its loans, and seek debt relief and financial assurances. With a total debt accumulation of $51 billion, Sri Lanka owes 20 percent of its debts to China, 9 percent to Japan, and 2 percent to India.

For Sri Lanka, the primary challenge would be to seek concessions from its largest lender — China. China often offered large loans with high-interest rates and fewer conditions. It is the only lender contributing to 10 percent of Sri Lanka’s overall borrowings (around $6.5 billion), yet accounting for 20 percent of its overall debts. But China’s willingness to provide any kind of relief depends on Colombo’s capability to align with Beijing’s expansionist interests.

In 2020, China helped Sri Lanka with financial assistance worth $2.5 billion, and in 2021, China provided a $1.5- billion currency swap. However, as the relationship between both countries soured due to a disagreement over the fertilizer deal in late 2021, China’s assistance grew passive. In 2022, China offered humanitarian assistance of a mere $75 million and has withheld requests for loan restructuring and additional financial assistance worth $4 billion. On multiple occasions, China attempted to pressurize Colombo to align with its interests for additional assistance. Pushing Colombo for the 7th round of Free Trade Agreement negotiations and Chinese ship Yuan Wang-5’s docking episodes are just some of these visible examples.

India’s approach to the crisis is people-centric as well as interest-driven. Both of these factors have compelled India to assist Sri Lanka with $3.8 billion in 2022. India has tried to prevent the Sri Lankan economy from collapsing by extending credit lines, currency swaps, modernization, investments, and emergency humanitarian supplies. That being said, to make sure the Indian Ocean is free of threats – India is offering a free-floating dock facility, and Maritime Rescue Coordination Centre, and has also provided a Dornier reconnaissance aircraft.

Besides, India has also at times asked Sri Lanka to show more sensitivity to Indian interests. As a result, Colombo canceled the Chinese energy projects in the Jaffna peninsula, offered India to modernize the strategic Trincomalee oil tank farm, and also unsuccessfully tried to deter the Chinese ship from docking in Sri Lanka.

Japan, on the other hand, despite being the second largest bilateral lender to Sri Lanka, has been very cautious to respond to the crisis. Sri Lanka’s suspension of rail projects and East Container terminal in 2020 and 2021 has likely contributed to its prudent policy. Yet Japan has belatedly committed to cooperating with India and helping Sri Lanka out of the humanitarian crisis — it has provided total humanitarian assistance of $6.5 million.

In addition, Japan is concerned about its security and economic investments in the country. In recent years, with the increasing relevance of the Indo-Pacific, Japan has also shown interest in defense cooperation, Sri Lankan ports (Trincomalee and West Container Terminal), and infrastructure development. It has developed partnerships with India to further its influence in the country. These stakes along with humanitarian concerns have motivated Japan to propose a shuttle-diplomacy approach, where it could coordinate or host meetings and conferences between India and China to help Sri Lanka restructure its debts.

China’s expansionist interests, India’s and Japan’s humanitarian concerns, and security interests have largely influenced how these countries have responded to the Sri Lankan crisis. It is these factors that will also shape the fate of Sri Lanka’s debt re-negotiations.

In this regard, the primary challenge will derive from Beijing and its expansionism. Beijing will likely continue to pressurize Sri Lanka to abide by its interests, often at the cost of Indian influence and security calculations. On the other hand, the appetite for more assistance to Colombo might wear thin in New Delhi, if Colombo continues to accommodate China. The docking episode is itself a stark reminder of India’s strong reservations. For its part, Japan and its shuttle-diplomacy attempt would prove futile if China refuses to restructure its loans.

As a high-profile Sri Lankan delegation will visit China in the coming weeks and energize the low-level discussions on debt refinancing, much is at stake for the regional order. Balancing between these powers will be a challenge for Sri Lanka — any misadventures as in the past will only undo what Sri Lanka has achieved with its staff-level agreement.

This article was first published in Business Standard as Bailouts and balances: Tough choices ahead for Sri Lanka on October 27, 2022.