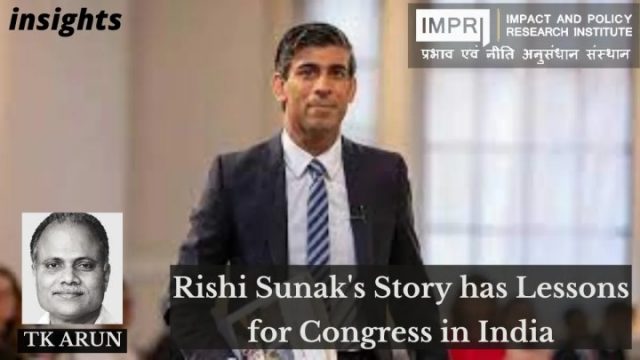 Own up Jawaharlal Nehru’s role as the builder of Independent India’s capitalism, instead of persisting with the once-expedient rhetoric of socialism.

Rishi Sunak has made it to 10, Downing Street. This after Liz Truss was forced out of office by the hostile reaction of the markets to the very measures she had campaigned on to win the support of the Conservative Party membership and defeat Sunak to become Britain’s Prime Minister just seven weeks ago.

This article does not discuss the Colony Strikes Back theme that seems to have gripped the imagination of many Indians after Sunak’s rise to the top of the British political establishment. Rather, it is about the implication of the raw deal Truss got for the Indian National Congress.

She got a raw deal: after all, the policies that sent Britain’s bond prices plummeting, yields soaring, and the pound to near parity with the US Dollar, were the policies she had championed during her campaign to replace Boris Johnson as the leader of the ruling Conservative Party and thus become Prime Minister.

Undone By A Dogma

In his General Theory, John Maynard Keyes warned: “Practical men, who believe themselves to be quite exempt from any intellectual influences, are usually the slaves of some defunct economist.”

Truss was a slave to an old nostrum of the Conservatives. Cut taxes, and growth would follow — that is an article of faith for British Conservatives, who saw, in Margaret Thatcher, their mascot for the post-Churchill world. Thatcher was seen as the political soul mate of United States Ronald Reagan, who also cut taxes, and made a fetish of bashing Big Government — the most terrifying nine words in the English language, he said, were “I’m from the government, and I’m here to help.”

To become Prime Minister, Truss had to beat Sunak, who had campaigned on a platform of sound finance, for which it would be necessary to raise taxes. The Conservative Party did not have to think a lot to dismiss him and choose Truss.

In effect, Truss was undone by the unthinking dogma — that to cut taxes is good and to raise taxes is obnoxious — that had become an integral part of the Tory subconscious.

There are lessons here for the Congress, which today faces the charge that Nehruvian socialism throttled India’s economic potential for the first three-and-a-half decades of Independence. This narrative holds that till Rajiv Gandhi began to relax controls in the mid-Eighties, Indian industry was in manacles and that the opening up and decontrol brought in by PV Narasimha Rao in 1991 unleashed Indian entrepreneurship, and only the Bharatiya Janata Party (BJP) can carry this dynamic forward. Nehru is blamed for his Fabian socialism, and the desire to build a socialistic pattern of society in India.

The Congress peddled this myth because it was politically savvy to be socialist and pro-poor, rather than to admit its government was building capitalism in the country and was helping to create a capitalist class capable of shouldering ever-larger responsibilities. The Communists lambasted the government under Nehru and Indira Gandhi as ‘Tata-Birla-ki-Sarkar’ (the government of the Tatas and the Birlas).

It is a different world today. Socialism is seen as a false credo, and its pursuit, as damaging. The Communists are politically irrelevant. The BJP, the Congress’ ideological nemesis, champions capitalist growth as enriching and empowering. The Congress, instead of citing the evidence that its policies under Nehru and subsequent Congress Prime Ministers launched the broad-based capitalist growth that is now pushing India to the forefront of global growth and delivering its people out of poverty, disease, and inequality, is giving the platform of growth to the BJP.

The Congress’ continued lip service to socialism is not just politically counterproductive against the BJP, but also carries with it the risk of being pushed into policy disasters of the kind into which Truss landed, following her party’s cherished nostrums.

Handsome is as Handsome does. What did Nehru do, regardless of what he said? He used deficit financing to generate the resources to invest in building the infrastructure that the economy needed and the Indian capitalist class was too feeble to build on its own. He used the State sector to build a machine tool industry, to build power plants, and the turbines to run the power plants. He built the steel plants that would produce the steel a growing economy would need. He built the commanding heights that the economy did not have but needed, and was beyond the reach of India’s capitalists.

But that was not all. Nehru provided Indian capitalists with the funds they needed to invest. This, he did in three ways.

One, by protecting industrial goods from the external competition via tariffs and import restrictions, he raised the prices of nascent Indian industry’s output relative to not just what they ought to have been in an open-trade regime, but in relation to farm prices. When the terms of trade are skewed against agriculture, farmers have to part with more farm produce than they need to have, to buy the industry’s output, whether tools, tractor trailers, salt, or cooking oil. This transferred resources from farming to industry, helping capital formation in industry.

The other route was by handing over the public’s savings to industry to use as debt and equity capital. The government set up development financial institutions (DFIs) that gave industry long-term loans. The IFCI was set up in 1948, the ICICI in 1955, and the IDBI in 1964 (Nehru died in May of that year, and IDBI’s formation was notified in June — the decision to set it up was taken in Nehru’s time). These channeled the public’s savings to Indian capitalists.

All banks were required to maintain something called a statutory liquidity ratio (SLR)– a proportion of net time and demand liabilities (NDTL) had to be invested in government bonds or other instruments notified as SLR-eligible. The government notified DFI bonds to be SLR-eligible, and the banks bought up DFI bonds, channeling the public’s deposits to the DFIs. The DFIs gave long-term loans to licensed projects of industry, with the money they got from issuing bonds.

This was not the only State-sponsored route to channel the public’s savings to private industry. The Nehru government set up the Unit Trust of India (UTI). The public put their savings into UTI, and UTI invested in the industry’s equity.

Yet another way of diverting the public’s savings to the industry was via deficit financing. When deficit financing creates inflation, workers’ wages adjust with a lag, which means the share of wages declines in relation to the share of profits in national income. These boosted profits become another way of capital mobilization for Indian industry.

Indian industry needed a dirt-poor population to buy what it produced. The government’s investment in infrastructure, intermediate goods, and capital goods not just created public enterprises and a consuming middle class, but also put purchasing power in the hands of those involved in this activity. They purchased the consumer goods, durable and non-durable, that the Indian industry produced, ranging from Hamam soaps to Ambassador cars. Indians could not have purchased Yardley soaps or Volkswagen automobiles because their imports were restricted.

Yet another helping hand the Nehru government lent to the industry was in the nurturing of the engineering and R&D talent industry needed. The Indian Institutes of Technology (IITs) and the Indian Institutes of Management (IIMs) did not crop up after a monsoon shower. State-owned labs did research that the Indian industry was too timid to undertake on its own, whether CSIR labs or the Central Leather Research Institute.

Even the abolition of zamindari and pursuit of land reforms in some states was a classical pro-capitalist reform, both expanding the base of consumption, and releasing rural workers to work in the industry.

Nehru might have had a good spiel on socialism, but his policies and State action were designed to build the infrastructure that Indian industry needed but were too small to build on its own, build locally the machine tools and other capital goods that industry needed, supply industry with capital, provide the industry with a protected, captive market where State spending created purchasing power for the industry’s products, and to make available trained manpower.

Nehru invited voters to worship at the new temples of modern India, but the deities of these new temples showered, when not stepping out to moonlight in the service of Indian industry, their benevolence, as intended, on India’s burgeoning capitalists.

To persist with the picture of Nehru as a socialist, merely on the strength of the State-owned enterprises he built, is analytically mistaken, and politically misguided. Broad-based capitalist growth is what reduces poverty, and redeems people from the wretchedness of poverty, and that is what the government sought to do under Nehru. There is no shame in accepting this.

By espousing sham socialism, the Congress cedes the plank of promoting broad-based growth to the BJP, as if it were the inventor and champion of such a project. What Truss said was unwise, but had the endorsement of the Conservative Party. Most Congressmen, even those who eat out of the hands of industry or own industrial units themselves, pretend to swear by socialism, thereby giving credence to the BJP’s claim to be the champions of growth.

The Congress must listen to Keynes, and learn from Truss’ debacle; it must embrace Nehru, the builder of modern Indian capitalism, and create a new political space of contemporary relevance by promising to build yet more on that pro-growth legacy.

This article was first published in MoneyControl as What Rishi Sunak’s rise can tell Congress in India on October 30, 2022.