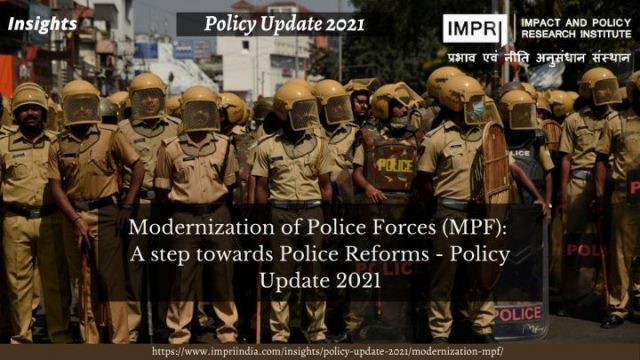 Under Assistance to States for Modernization of Police (ASMP) scheme, the Ministry of Home Affairs (MHA), on behalf of the Central government, has been supplementing the state’s efforts in modernizing the state police force. Police” and “law and order” are subjects that fall under schedule seventh of state list, entry two. The state governments are responsible for maintaining respective police forces, but there has been a gap in their capacity due to financial constraints. Therefore, center is assisting the states in this regard.

The scheme’s objective is to build the capacity of the state police forces such that gradually, the dependence of states reduces on the army and other security forces to tackle their internal law and order situations. To achieve this, the state governments will get central assistance in acquiring the latest weaponry, training gadgets, advanced communication systems, policing equipment, forensic equipment, and facilities building.

This is a centrally sponsored scheme and partially funded by the government of India and partly by the respective state governments. The three Himalayan states, including J&K, Uttarakhand, and Himachal Pradesh, are eligible for funds in the ratio of 90:10, while the remaining states would receive the financial assistance 60:40 ratio. Some specific projects based in the northeast were eligible to get extra assistance of Rs. 7,380 crores for the period of 2017-18 to 2019-20.

The act has the following salient features:

Modernization is steadily improving, with a special focus on cybercrimes. One of the primary purposes of the scheme was to tackle left-wing extremism. The government of India informed parliament that a decline in left-wing extremism cases and a reduction in the geographical spread had been recorded. The constriction of geographical spread decreased SRE districts from 126 such districts to 90, till 2018. This is estimated to have further reduced to 70 districts LWE affected areas with an improving scenario.

Even though the fund’s expenditure of states has gradually increased through the years, it is still underutilized. The comptroller and auditor general of India has found in its report that state police forces like Rajasthan & West Bengal, among others, are facing a shortage of weaponry. Rajasthan and West Bengal had 75% and 71% weaponry shortages, respectively.

Further, the Bureau of Police Research and Development has also found in its evaluation that there is a 30.5% deficiency in stock of required vehicles (2,35,339 vehicles) with the state forces. This is an issue on the part of state Governments as the center is regularly disbursing the allocated funds. For instance, in 2015-16, 662.11 crore RS were allocated to the ASMP scheme, of which the center released 100% amount to the states. In the same period, the states utilized only 14% of the allocated fund, cumulatively.

The scheme’s success depends on the timely and quality acquisitions of weaponry and equipment. Along with this, adequate training, infrastructural, and capacity building is called for. There has been a slow and steady improvement in the situation that the scheme was set to bring.

The police reforms are yet to be declared successful, and more visible impacts are yet to come to light. Several functional and structural challenges within the police force require an address.

During the pandemic, rate of crime has increased strikingly. From women-related crimes to cyber frauds and harassment, the role of policing has significantly been a requisite. Additionally, the lockdowns, containment zoning, and the disease itself have burdened the police force, which was already dealing with a considerable number of vacancies. At such a time, the necessity and significance of this scheme are crucial. Unutilized funds can be used judicially to address these situations.

Police reforms have been a contention of debate for a long time, and the AMPF or MPF scheme has tried to improve the police force capacity and infrastructure. However, some structural issues remain that hamper the scheme’s performance.

Allocated funds under the scheme have been inadequately utilized. This has a scope to enhance significantly when the range of crimes and crime platforms has increased. The police force today needs to tackle traditional crimes and cybercrimes. This calls for better and modernized communication, tracking and monitoring equipment. Proper fund utilization has the potential to improve police force efficiency and reduce crime rates.

According to the Government of India, till January 2020, the actual sanctioned strength of police personnel across the states and union territories was 26,23,225, while the actual strength cumulatively was 20,91,488 personnel. There is a 20.27% vacancy. This significant recruitment gap overburdens the police force already struggling with other structural issues affecting the functioning and performance

The sole reason for such consistent low conviction rates in India is the poor quality of investigation by police.

Around 86% of Indian police are constabulary and lack the necessary training and expertise essential for professional investigation. They also have insufficient legal knowledge and inadequate forensic and cyber infrastructure. The second administrative reforms report recommended that establishment of specialized investigation units within the police force improve investigation to overcome this deficiency. The unutilized funds under the AMPF scheme can be directed to this.

The survey conducted and reports submitted by the Bureau of Police Research and Development Ministry of Home Affairs says that through the procurement of updated weaponry and training of the personnel, the morale, performance, and efficiency of the police force has boosted. Further, more efforts are required to properly and sufficient funds to achieve the best results through the scheme. The scheme has had a visible impact on police performance.

The up-gradation in the communication systems cyber security measures is the need of the hour as cybercrime cases are growing in the country. Quality construction, mobility solutions, weapons procurement, computerization, and communication equipment under MPF positively impacted the efficiency of the forces in Naxal and left-wing extremism-affected areas.

It was also suggested in the report that the Old and outdated weapons and equipment should be phased out. The replacements can be procured through selling outdated equipment and paying the differential amounts from the MPF funds. The government of India sees the potential and need of this scheme and has been rightly continuing with it to assist the states and improve the sufficiency of their respective state police forces.

Sonia Singh is a Research Intern at IMPRI. She is currently pursuing her Master’s degree in Regulatory Policy and Governance from Tata Institute of Social Sciences, Mumbai