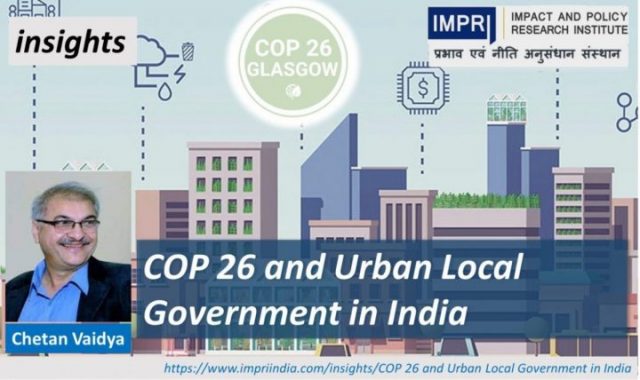 The COP 26  UN Climate Change Conference, took place during October- November 2021 in Glasgow, UK. It called for renewed efforts to raise ambition on cutting emissions, climate finance, adaptation, and managing the loss and damage being caused by global warming.

Through these commitments, India has to now move strategically to achieve the targets, especially for 2030.  It has to be more than just green financing and innovative technology. India still has to frame a comprehensive plan for the 40 years from 2030 to deliver on its goal of carbon neutrality.

The urban sector has to play a crucial role in achieving these COP 26 commitments. Without involving cities India’s climate goals will not be achieved. India’s urban population was 377.1 million in 2011, which is 31 percent of the total population of the country. It had 4,000 urban local bodies and as many as 46 cities with more than 1 million population in 2011. Urban India is very large and diversified. So, one size fit all will not work in the urban sector. Cities in the country are facing frequent extreme weather events such as floods and heat island effect which may be due to climate change.

In this context, some of the possible actions in urban areas to meet the COP 26 commitments are:

The Ministry of Housing and Urban Affairs (MoHUA) has stated in the revised National Mission on Sustainable Habitat (NMSH 2021) that enabling climate actions intend to address the overarching framework to facilitate adoption and implementation of the sector-wise climate action strategies. These include strategies pertaining to Urban Governance, Capacity Building, Data, Technology & Innovation, and Financing mechanism for the mission.

MoHUA has undertaken a number of climate-sensitive initiatives. It has in 2019, initiated the “Climate Smart Cities Assessment Framework” (CSCAF) as a step towards holistic, climate-responsive development. The objective of the CSCAF is to provide a clear roadmap for the cities and, in effect, urban India as a whole towards combating Climate Change (mitigation and adaptation) while planning their actions, including investments. It covers five sectors namely, Urban Planning and Green Cover, Energy and Green Building, Mobility and Air Quality, Water Management, and Waste Management.

The second round of assessment for this framework for 126 Cities was completed in 2021. A “Climate Alliance” has been set up in 2020, which brings together 70 organizations with diverse skills, strengths, and resources required for planned Climate action. The CSCAF indicators have been included in the revised National Mission on Sustainable Habitat (NMSH) document that was released in 2021 and will help in making climate action mandatory for all cities in India. Climate Center for Cities (C-cube) has been established with the National Institute of Urban Affairs (NIUA) in 2020.

It is interesting to note that many Cities have prepared City Climate Action Plans. These include Rajkot, Surat, Coimbatore, Kochi, Udaipur, etc. Maharashtra State Government has given a mandate to 45 large cities to prepare city climate action plans. Rajkot and Udaipur Climate Resilient City Action Plans have been approved by their General Boards. Various mitigation and adaptation interventions have been identified for Rajkot based on GHG emission inventory and urban system analysis in line with existing city planning and future projects.

Urban Local Bodies (ULBs) played a crucial role in managing the Covid-19 pandemic. Some Cities developed a Covid tracking system to identify potential victims. Integrated City Command and Control Centres (ICCC) set up under Smart City Mission have been turned into “war rooms” to monitor the disease and communicate with citizens. A Geospatial Dashboard comprising of multiple GIS layers to visualize the extent of spread and crisis and linked to social media for informing and involving citizens was set up by Cities. Some urban centers adopted a cluster containment strategy to manage Covid in high-risk areas. Thus, cities brought many innovations in Covid management

ULBs can play a crucial role in climate management then they have to be empowered. The 74th Constitutional Amendment 1992 empowered local bodies in terms of functions, functionaries, and finances (3Fs). Regular elections, reservations, and setting up of State Finance Commission but 3Fs have not been transferred to ULBs in all states. Kerala is one of few states which has implemented 74th CA in letter and spirit.

The People’s Plan Campaign for decentralized governance was adopted in 1996 and provided nearly 30 percent of the state budget to local bodies. City Mayors in Kerala have executive powers and cities are not managed by Municipal Commissioners.  Moreover, area sabha and ward committees play an important role in participation in urban governance. Women representatives from the community-based organizations called “Kudumbashree” also play an active role in the delivery of various services in the State. However, ULBs are not empowered in many states.

Specific purpose authorities have in fact proliferated over the years. These have been created for water supply and sewerage, slum clearance, and improvement, urban planning, and development. Multiple agencies delivering urban services and not necessarily integrated with ULBs in most states.

Institutionalizing climate action in ULBs will require developing capacity and increasing personnel dedicated to the cause. However, India empowered cities with appropriate technical and financial assistance will be able to respond to Climate Change issues. These challenges will become opportunities to introduce urban innovations. More and more start-ups should be encouraged in urban service delivery and revenue management. These start-ups working perhaps need a separate urban IT platform and several hackathons to address urban climate and other issues.