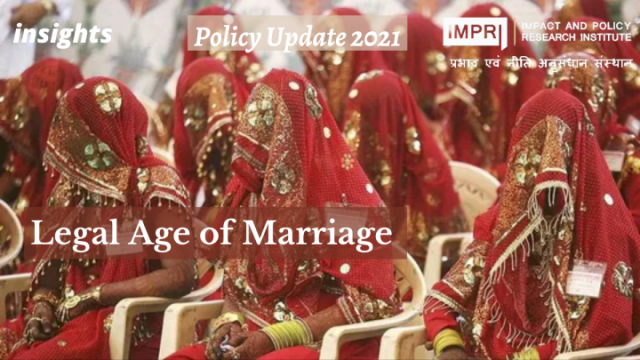 The legal age of marriage in India has a long history which dates back to the British Raj and has undergone various transformations in the face of societal changes. The different age of marriage for both the sexes traces its roots to personal laws which are often discriminatory to women and the belief that they mature early as compared to boys and the wide practice of hypergamy, where the boy has to be older, needs to earn more money, have better education than his partner.

Interestingly, this notion is perpetuated by law that too only in the case of marriage whereas when it comes to Universal Adult Franchise, the age of majority is 18 for both the sexes as per the Indian Majority Act, 1875. This law mandated discrimination reinforces patriarchy, sexism and gender stereotypes. This differential bar discriminates against women, violating fundamental rights of gender equality, justice and dignity of women and breaches Article 14, 15 and 21 of the constitution. The reflection of patriarchy in personal and the secular laws must be reformed to satisfy constitutional framework.

According to The National Behavioral Surveillance Survey, 50% of male and female youth in the age group of 18-25 years already had sex before 18 years. For women, sex is exclusively within marriage whereas for male youth, the ratio is at 25% with non- regular sexual partners. It is important to consider and now with the announcement of the PM of India to increase the legal age of marriage for girls to 21, the sexuality of girls will further be under surveillance of the state.

Sexual consent and social outrage are intricately linked. Honour killings are an example of the turmoil and rage in the society when consenting adults marry outside the same cast or religious group in the name of “Family honour”.

Many people fear Sexual anarchy in the society. In the 21st century, there is no perfect age of marriage. Everyone has a different time clock in this World and has the freedom to choose and decide when one wants to get married but is an individual really free? Do men and women have same choices when it comes to marriage? Certainly not, Education and employment are directly linked to the age of marriage. The stigma of Gender inequality still remains. A debate on the choice between individual rights and social good enforced by Law is going on.

The law commission report constituted for looking into personal and family laws recommended that maintaining the difference of eighteen years for girls and twenty-one years of age for boys simply contributes to the stereotype that wives must be younger than their husbands.

For equality in the true sense, the insistence on recognizing different ages of marriage between consenting adults must be abolished. The difference in age for husband and wife has no basis in law as spouses entering into a marriage are by all means equals and their partnership must also be of that between equals. Thus, this view has been given to the government previously which is also our main argument. So, the reason for having an equal age of marriage is fully justifiable.

The 18th Law Commission report (2008) too asked for uniformity in the age of marriage at 18 years for both men and women and lowering the age of consent to 16 years.

Implications of raising the legal age of marriage

NEGATIVE IMPACT-The National Family Health Survey data (NFHS-4) data 2015-16 reveals particular trends in early marriages; rural women are likely to marry earlier than the urban women pointing to the direct linkage between education and delayed age of marriage. Women with more than 12 years of education are likely to marry later in life.

Increasing the legal age of marriage for girls to 21 years will add to the difficulties for a woman to access basic reproductive and sexual healthcare.

Child marriage laws are widely misused in India by parents against eloping daughters as seen in The Supreme Court and The Kerala Court in the Hadiya case; in this case an adult woman’s decision to marry was challenged by her parents.

Under PCMA, a minor is allowed to repudiate or nullify the marriage up till two years of attaining majority which is discriminatory in nature as for a girl, its 20 and for a boy, it applies until he turns 23. To make it equal, the period of repudiation for a marriage should be four years.

POSITIVE IMPACT– Indian Majority act, 1875 grants the right to vote and to enter into any contract on attaining the age of 18. According to The State of Bank India report, raising the legal age of marriage of women carry “enormous” economic and social gains for India. There seems to be a consensus among the medical fraternity. “With growing age, the risk of developing physical health issues like diseases, hypertension is more.

At the same time, marrying at an early age is also risky especially under 20. Marriage is not a wealth consuming or wealth enhancing event; it’s a divine feeling of having someone on our side forever. The ideal age of marriage is preferably 25 to 30 years for both men and women”.

Beneficial for health and demographic benefits as teenage pregnancies are at higher risk compared to those who are over 20. In addition to that Article 14 and 21 of the Constitution are violated by having different legal age of marriage for men and women to marry as asserted quite strongly in ‘Joseph Shine vs Union of India’ in which the Supreme court said that ‘a law that treats women differently based on gender stereotypes is an affront to women’s dignity’.

Current laws of child marriage should be strengthened further and implemented at the ground which can become a reality only if, education is imparted to all as “Education is Power”. Increasing the legal age of women to 21 has both merits and demerits but after doing deep research, it can be concluded that these laws and questions are essential and therefore must be addressed by the government in a way that leads to more conversation, not assertion because the most impacted will be women from the marginalized communities and classes.

India already has a lot of laws but the problem has always been with implementation because of lack of political will and a low number of police officials as well as pending cases in the judiciary. This issue needs to be looked at from a broader perspective and therefore strengthening the state machinery is very important and crucial as ultimately only it has the power to enforce things with force if we see it from a Hobbesian perspective.

Proper awareness and addressing economic reasons behind social evils is crucial. Kofi Annan’s statement that “Gender equality is more than a goal in itself. It is a pre-condition for meeting the challenge of reducing poverty, promoting sustainable government and building good governance” should be followed in letter and spirit.