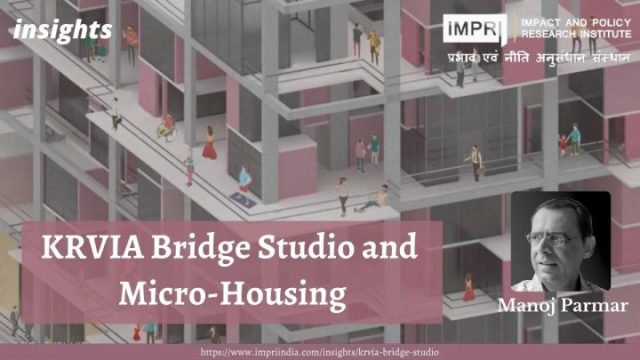 Cities in India are faced with the challenges of unprecedented migration of labor and workers in search of better livelihoods. Housing for such migrants along with the existing living densities in the slums requires the reassurance for the need of housing types that are based on households and existing livelihoods.

The methodology for the studio was based on the understanding of these households and the economic activities of the inhabitants. The other part of the studio was hinged on two types of case studies, one that looked at finding a relation between the household and the size of the house and the second one that examined the various sites and houses types. The latter part of the studio engaged with developing architectural typologies in a given site condition with optimum infrastructure.

The objective of the studio was to expose and explore academics related to emerging housing typologies that are necessary with changing times and as newer paradigms unfold in living and working relationships with the city. The idea of the house and housing is usually seen through typologies of sizes concerning the family unit.

However, in a city like Mumbai, such imaginations are far from reality where one has to negotiate constantly between minimum housing and optimum housing. The studio attempts to explore micro-housing based on households (situational), where the relationship between the house and the self is negotiated as a subsistence mode of living in the city.

The second phase of the studio was to develop the appropriate brief that negotiated the boundaries between architectural functions and urban questions. The third phase was dedicated to addressing the urban question by locating urban issues and the quality of life that could be associated with micro-housing. The last phase was to develop an individual architectural intervention based on collective decisions on the master plan concerning density, ground cover, streets and buildings sections, and lastly the FAR.

First published in Between Architecture and Urbanism KRVIA BRIDGE STUDIO: 2021 on 5 January 2022.