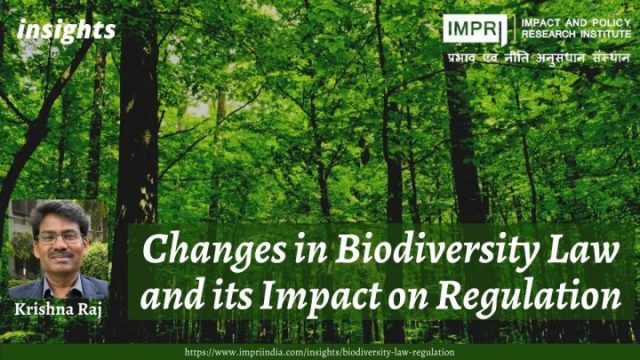 The proposed Biological Diversity (Amendment) Bill, 2021, now being referred to the Joint Parliamentary Committee for scrutiny, was tabled in the Lok Sabha without public consultation. The Biological Diversity Act (BDA), 2002, was prepared with caution and on the basis of a scientific spirit to protect and preserve the scarce biological diversity of India and the traditional knowledge associated with it.

The Act was also in support of sustainable economic use of its components on the principle of fair and equitable sharing of the benefits. To ensure its implementation in letter and spirit, and prevent bio-piracy from foreign research institutes funded by multinational pharmaceutical companies, the National Biodiversity Authority, state biodiversity boards, and biodiversity management committees at village levels were empowered to take decisions and impose fines.

Though the amendments to the BDA-2002 are well-intentioned, they have weak regulations. While the Bill encourages the cultivation of medicinal plants on private land to reduce dependence on wild medicinal plants, poor monitoring and regulation over the supply chain may lead to an appropriation of wild plants associated with traditional knowledge of the local communities. The concern is real as the Bill proposes to exempt Ayush practitioners from seeking approval for the economic use of plants from biodiversity boards.

The amendment pushes for the commercial use of biodiversity involving Ayush with relaxations in punishments, including decriminalization of bio-piracy, simplification of the patent process, promotion of patents based on research, and attraction of foreign investment. This shows that the government intends to reduce its control on biodiversity — a state and community property resource.

In recent years, the demand for access to biodiversity or genetic resources and associated knowledge for economic use and development has increased, particularly among the Ayush, seed, and research industries. They have sought relaxations of the benefit-sharing provisions to gain more patents. The expanding patent activities have implications for public health, food security, biodiversity, agriculture, indigenous knowledge, and benefit-sharing.

Traditional livelihoods of millions of local communities directly rely on the rich biodiversity of plant genetic resources in India. The livelihoods, especially of indigenous people like forest-dependent communities, have been increasingly getting affected in recent years as the quest increases for the mining of traditional and genetic resources with the aid of changes in policies and regulations.

These provisions raise the critical question of the potential impact on indigenous people’s livelihood and their knowledge protection where knowledge in the public domain is increasingly becoming private, thereby ushering in private rights over public goods. Biodiversity or genetic resources are increasingly being privatized. The structural alternations of property rights over common property resources have several implications, particularly for indigenous people’s livelihoods. The traditional knowledge continues to be the basis of food and nutritional security for the indigenous people who have accumulated this knowledge through interaction with biodiversity for generations.

The Food and Agriculture Organisation states: “India has a long-standing knowledge and understanding of using medicinal plants in its codified medical systems, as well as through its highly diverse folk traditions. The knowledge of plant identification, methods of collection and processing, biological activities and uses was transmitted both orally and in written form by traditional medical cultures in India.” Ethnopharmacologist Elaine Elisabetsky observes: “To transform a plant into medicine, one has to know the correct species, its location, the proper time of collection, the solvent to use, the way to prepare it, and finally, posology (route of administration, dosage).

The amendment may allow private interest to take precedence over public concern and the proliferation of exclusive rights could be a stumbling block for the provision of numerous national public goods, including healthcare, biodiversity conservation, and environmental protection. Studies show that patents held by the public sector are much lower than the private sector, showing the domination of MNCs in commercializing biodiversity. It has led to a rise in the prices of essential and lifesaving drugs. Less than 2 percent of our plants are studied for their phenolic constituents. More evidently, a lacuna in medicinal plant research is due to the unavailability of data on the chemical constituents of herbs available as drugs are camouflaged.

First published in The Tribune Changes in biodiversity law may weaken regulation on 27 December 2021.